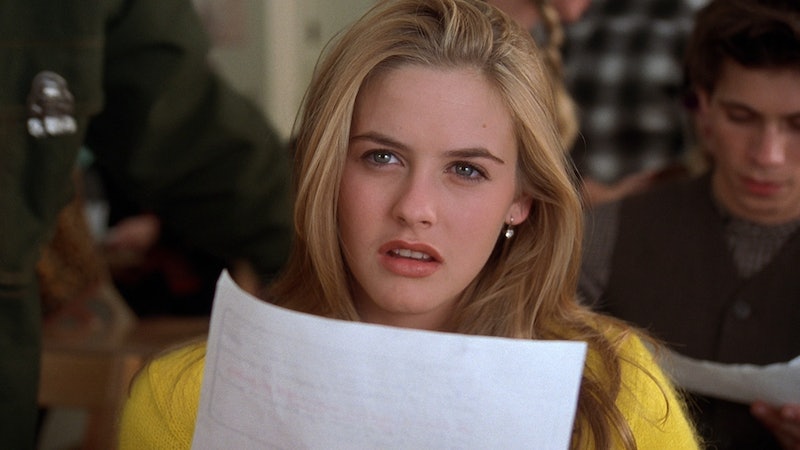 The movie that influenced the way a generation talked and reinvented the Jane Austen classic Emma is making the most unexpected comeback. Think you're ready for this news? As if. Clueless is becoming a comic book, according to Vanity Fair. I told you, this is like, totally the best news ever.

Since its 1995 release, Clueless' impact on the pop culture landscape has been undeniable. For a generation of kids, Clueless set the tone for how they communicated with each other, what they wore, and how they embraced their budding feminism. The film's writer-director Amy Heckerling completely changed the game by revamping an Austen novel with a quippy, Valley Girl hero and her posse of besties.

Now Boom! comics — arguably the most feminist comic book company currently in existence — is ready to continue Cher's story. Now, true Clueless fans know the movie was followed by a TV show that kept Cher and her friends going strong for three seasons, but the series aired so long ago, it's time for a fresh take. The Clueless comic books will find Cher, Dionne, and Tai dealing with senior-year anxiety as they prepare for their futures as college students. And yes, it is set in the '90s.

Here's the best part of the news: the Clueless comic books will be written by Sarah Kuhn and Amber Benson. You know, Benson as in Tara from Buffy the Vampire Slayer, that other landmark piece of pop culture that totally changed the modern vernacular in the '90s. Commence spazzing out now.

Benson and Kuhn are joined by Adventure Time artist Siobhan Keenan, forming an entirely female team working behind the scenes to bring you new Clueless goodness. In an interview with Vanity Fair, Benson revealed the team's commitment to preserving the uniquely '90s vibe of the story led them to consult a slang bible of sorts to make sure Cher and her pals sounded like themselves. Benson said,

"The hardest part of working on the project for me has been trying to make everybody sound authentic without being trite. And we're really, really lucky—we have an amazing editor in Shannon [Watters], who sent us this U.C.L.A. slang book that has all of this amazing 90s slang in it. I use that like a bible, and I can recite it verbatim now. I think Sarah and I had some sort of struggle with this, trying to make it sound real and not like a cartoonish version of the 90s."

While plot details are currently being kept quiet, aside from the senior year setting, fans can only hope Cher's dreamy relationship with Josh will be explored. There is sure to be some angst as Cher weighs the pros and cons of heading off to college with a clean slate versus keeping her romance going, and I cannot wait to see what she decides. Given how Clueless is first and foremost the story of three infinitely cool high school girls, I suspect Cher will be putting her friendships first, no matter what she decides about her relationship status with Josh.

For now, just knowing Cher, Dionne, and Tai's adventures are set to continue has me buggin'. The Clueless comic is set to debut in August, guys, so mark your calendars accordingly.

More like this
22 Movies On Netflix That Are Perfect For The Whole Family
By Bustle Editors
Reese Witherspoon Gave Fans Hope For 'Legally Blonde 3' After This Surprising Movie Inspired Her
By Jake Viswanath
Watch The Teaser For Amazon's Adaption Of The 1992 Film 'A League Of Their Own'
By Sabienna Bowman
Before 'Bullet Train,' Revisit These Brad Pitt 'Fight Club' Premiere Photos From 1999
By Grace Wehniainen
Get Even More From Bustle — Sign Up For The Newsletter