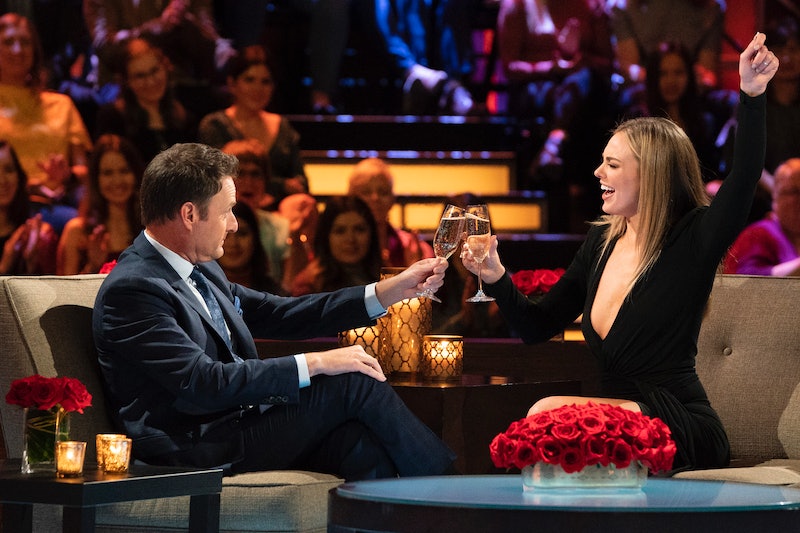 Colton's The Bachelor season is coming to an end and the women who have been eliminated are taking the stage for Women Tell All. One contestant who will be in the hot seat opposite Chris Harrison is Hannah Brown. Colton sent Miss Alabama 2018 home in Week 7, but there are some good clues that Hannah B. be the next Bachelorette? Typically, the next lead comes from the top four of the previous season. So since Hannah B. technically came in seventh place after Heather, Kirpa, Caelynn, Tayshia, Hannah G., and Cassie, she doesn't necessarily seem like an obvious choice. But thanks to her personality and willingness to be the face of the franchise, Hannah B. just might get another shot at love on The Bachelorette.

Women Tell All couldn't come at a more dramatic time in Colton's season since it follows the March 4 episode of The Bachelor where Colton admitted he was going to pick Cassie before she left the show. This confession makes predicting the next Bachelorette a little difficult due to the fact that there's only the two-part finale left and there are three (well, two) women remaining.

It wouldn't be right for Colton to choose Tayshia or Hannah G. now that he's admitted he'd rather be with Cassie regardless of an engagement. So while Cassie seems to be out of the running for the next Bachelorette, Tayshia or Hannah G. could still get the role. But perhaps the best play here is to not include anyone who is part of Colton's latest drama and go with Miss Alabama herself.

Hannah B. went home in the same episode as Heather and Kirpa, but she had much more screentime, due to her drama with Caelynn. While that might work against her, in the end the two women apologized to each other and came out fan favorites. In fact, the other major contender from this season would be Caelynn, who got sent home after hometowns.

However, in an interview with Glamour following her elimination, Caelynn admitted her hesitation to be the Bachelorette if it was offered to her. Even though it was filmed months ago, she said she's still hurting from the breakup with Colton. "I really did struggle, and I don't know if that's something that's right for me. I'm just focused on continuing to heal my heart and focus on that right now," Caelynn said.

She Wants The Gig

In an interview with Entertainment Tonight, Hannah made her interest in the position quite clear. "I did evolve so much as a person on the show. I came in so terrified of what this thing was and if I wanted to be vulnerable with producers, with the girls, with Colton. And then by the end of it, I laid it all out on the table. I freaking roared," she said. "I would love to have the opportunity to continue on shedding that layer of just trying to be whatever I think people want me to be and just being myself." She continued, "I think I really believe in this process and I do think you can fall in love here and be in love and find your person. So, if it could be me, that would be great. I'm really sincere about it."

Hannah seems to be in a good headspace to take on the role to find love with someone who isn't Colton.

She Has A Sense Of Humor

Another reason Hannah B. is promising is because of her personality. "I think it'd be damn entertaining," Hannah told ET about her Bachelorette season. "I can guarantee that." Even though she lacked toasting skills and broke a cardinal rule by bringing up past issues with Caelynn, Hannah did provide some of the most engaging moments of Colton's season. And star power is something that creator Mike Fleiss looks for in a lead.

In an interview with Entertainment Weekly ahead of Colton's season, Fleiss talked about why the show chose Colton over contestants like Jason Tartick and Blake Horstmann. "When we sat with all the guys that we were considering, Colton just seemed like a star. When you're in the room with him, you're like, that's a big personality, a big presence. He just won us over," Fleiss said. "I think Colton represents the biggest potential for that story to create a lot of drama and romance."

Reading that description of a "big presence" and the potential "to create a lot of drama," it's kind of hard not to think of Hannah B. She does seem to be on everyone's mind as a safe bet for the role — reactions to Fleiss' tweet about people attempting to spoil the upcoming Bachelorette announcement show that she's definitely a strong contender, for better or worse.

Either way, Hannah B. has made a name for herself, so she could very well be the next Bachelorette. And if so, she better brush up on her toasting skills cause roaring and saying "roll tide" can only get you so far.