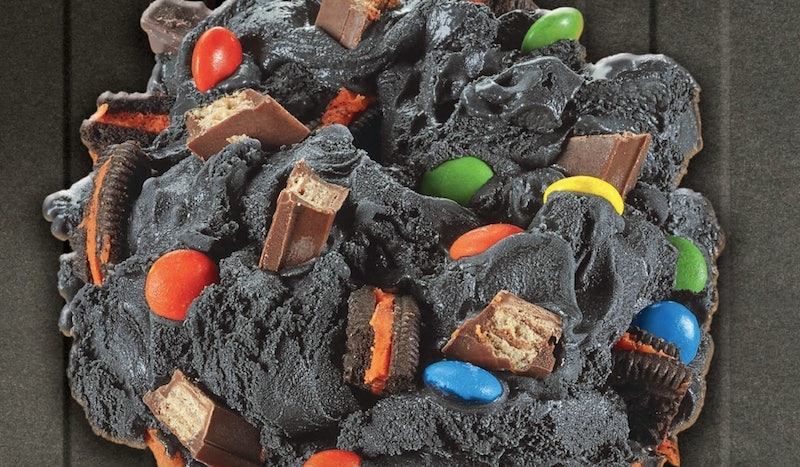 Now that it’s finally October, purveyors of delicious eats and sweets have begun dropping their Halloween menus in earnest — but many of them are going to have a hard time measuring up to one particular limited-edition treat: Cold Stone Creamery’s Halloween 2019 Creation, "Treat Or Treat," is literally pitch black and full of candy. It looks kind of like an ice cream version of a Worms ‘N Dirt dessert, minus the gummy worms (although TBH, you could probably add some if wanted), so naturally, I am absolutely Here For It. I mean, I’m generally a fan of seasonal food offerings, but Halloween food offerings? They’re definitely the best. They’re so weird, and I love it — and this one is honestly one of the weirdest of the bunch.

Cold Stone announced the new treat on Oct. 1 on Twitter, in a press release, and with the help of food Instagrammers like Candy Hunting. “We are incredible excited to introduce this super limited-time Creation at Cold Stone Creamery,” Sara Schmillen, VP of marketing for Cold Stone parent company Kahala Brands, said in the press release. “Indulge in the nostalgia of your Halloween childhood memories with the Treat Or Treat Creation; it’s a spook-tacular way to get into the Halloween spirit.”

The treat — what Cold Stone usually refers to as a Creation, with a capital C — consists of “Boo Batter” ice cream mixed with M&Ms, chunks of Oreo cookies (with orange crème instead of the regular white!), and pieces of Kit Kat bars. What sets it apart from other candy-filled Halloween ice cream flavors is the way it’s made: Using Cold Stone’s signature method, the ice cream and mix-ins are folded together by hand right before your eyes on a frozen granite slab with the help of two fearsome-looking spades.

From there, you can have your Creation served up however you like — in a cup, in a waffle bowl, in a sugar cone, you name it. If you’re feeling extra spooky, pop it in a Halloween-ready black or orange waffle bowl or cone, which will also be available while the Treat Or Treat Creation is on the menu.

What is Boo Batter ice cream, you ask? Possibly not quite as exciting as you were hoping, but still entertaining. Per Cold Stone’s Twitter account, it’s just their regular Cake Batter ice cream. To be fair, though, they have turned it “pitch black” for the month of October, making it look more like that wacky activated charcoal ice cream that was having A Moment not too long ago. Rest assured, though, that it still tastes like cake. (However, there’s no word yet on whether it will, uh, have a similar effect on the human body that the Burger King Whopper with the black bun that made waves during the Halloween season a few years ago did.)

It’s worth noting that Cold Stone Creamery didn’t invent the concept of customized, hand-mixed ice cream made to order. Steve Herrell is usually credited with starting the trend at his Boston-area ice cream parlor, Steve’s Ice Cream, which opened its original location in Somerville in 1973. (At Steve’s, the concept was referred to as “smoosh-in” ice cream.) Cold Stone played a big part in popularizing the idea, though — and the company grew rapidly. The first Cold Stone opened in Tempe, Arizona, in 1988; the first franchised store opened up in 1995; and by 2005, it had become one of the fastest-growing franchises in America, according to Entrepreneur magazine. The name of the chain comes from the granite slab on which the ice is mixed — that is, the flavors are created on a literal cold stone.

Business has tapered off a bit since then — the same is true of many other Hot Trend companies that rose to prominence in the mid-2000s (hi there, Build-A-Bear), due in large part to the economic downturn of the Great Recession — but it's still riding high on a wave of ice cream and waffle cones. As of May, Cold Stone Creamery remains one of the top food franchises in operation today, per Entrepreneur.

In recent months, Cold Stone has been kicking up its limited-edition, themed treats several notches. A number of Mario Kart desserts debuted at the end of August, for example, including a Creation and an ice cream cake; in fact, they’re still available now (their last day of availability is Oct. 15). But once they’re gone, at least we’ve got this new Treat Or Treat Creation to fill the void.

The Treat Or Treat Cold Stone Creation will be available at participating Cold Stone locations for a limited time during the Halloween season. Head here and enter your ZIP code in the upper right hand corner to find your nearest store.

More like this
I Tried The $20 TikTok Viral Oishii Strawberries — Here's What I Thought
By Sophie Hanson
On TikTok, A ‘Snackle Box’ Is The Best Way To Pack Charcuterie On-The-Go
By Meguire Hennes
13 Selfie Instagram Caption Ideas That Exude Main Character Energy
By Jessica Booth and Emma Carey
TikTok Is In Its Elle Woods Era
By Meguire Hennes
Get Even More From Bustle — Sign Up For The Newsletter