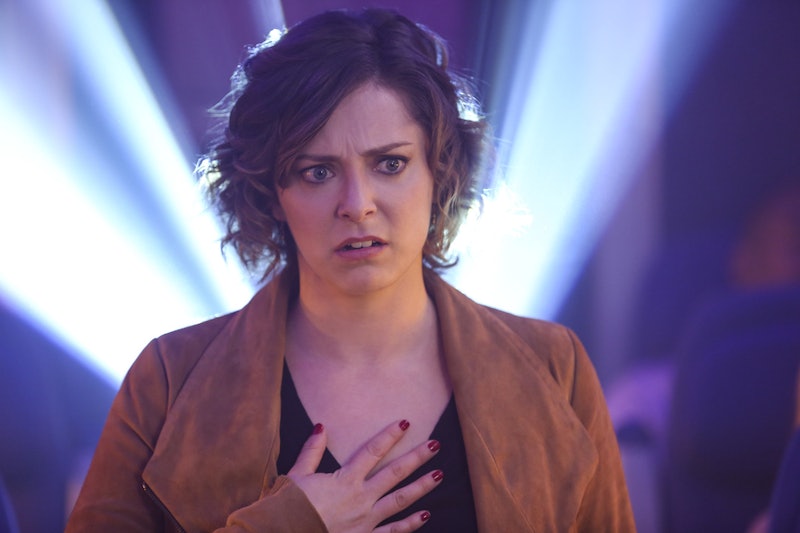 Prepare to hum a new tune when Rebecca Bunch returns in the fall. According to TVLine, Crazy Ex-Girlfriend Season 3 will have a new theme song. Just as it did in Season 2, the series is changing its opening number to reflect Rebecca's current state of mind. There's no word yet on what exactly that means, but Josh Chan is not invited to the party. At the Television Critics Association press tour, series star and co-creator Rachel Bloom told the audience that the entire cast, minus Josh, will be in the opening number (in the first episode, at least), Vulture reported. That's not a slight against actor Vincent Rodriguez III, but rather a reminder that Josh left Rebecca at the altar, and he's not Rebecca's favorite person right now.

With a new opening number comes a high-profile director. Music video legend Joseph Kahn, who has worked with Britney Spears, Katy Perry, and Taylor Swift, directed the new credit sequence. And that's not all, he's also returning to helm the season's third episode. That means the man behind the "Bad Blood" music video will have a fairly large influence when it comes to the tone and look of Season 3.

As catchy as the Crazy Ex-Girlfriend's original themes were, change is good in this case. The show is at a point where it has outgrown Season 1's sunny ode to West Covina, and Season 2's cheery love-fueled dance number. Rebecca's journey in Season 3 will take her far beyond her pining for Josh. Now that she's been jilted by her dream man, she may be forced to realize that's all he ever was: a dream. Changing the theme song to include more of the important people in Rebecca's orbit is a crucial step toward the show's flawed hero recognizing how amazing her new life truly is.

Don't expect the new credits to mean Rebecca's journey toward self-actualization is anywhere near being done just yet though. It sounds like her vow to get revenge on Josh will play a role in Season 3, even if Rebecca's not as Fatal Attraction as she thinks she is. In fact, the first song of the season is going to be Disney-themed — and it's hard to get less Fatal Attraction than that. (Please let it be a Disney villain anthem CW.)

Ultimately, Rebecca's attempts to hurt Josh may end up helping him. Rodriguez told Vulture that despite Rebecca's best efforts to hate Josh, she's going to play an integral role in helping him find his path. He said,

"Josh is going to hit a crossroads, because how long does he ever stick with anything? Also, where does Josh see himself with his future? That's something he's going to have to face head-on. What's weird is that Rebecca's going to help facilitate that, given her revenge-seeking bullet."

Bidding farewell to the show's previous anthems is bittersweet, but it's time. Rebecca is clearly moving in a new direction, and her days of idealizing Josh Chan are over. Her new anthem should be powerful, a little bit angry, and reflective of the wild ride she's been on since she first arrived in California.