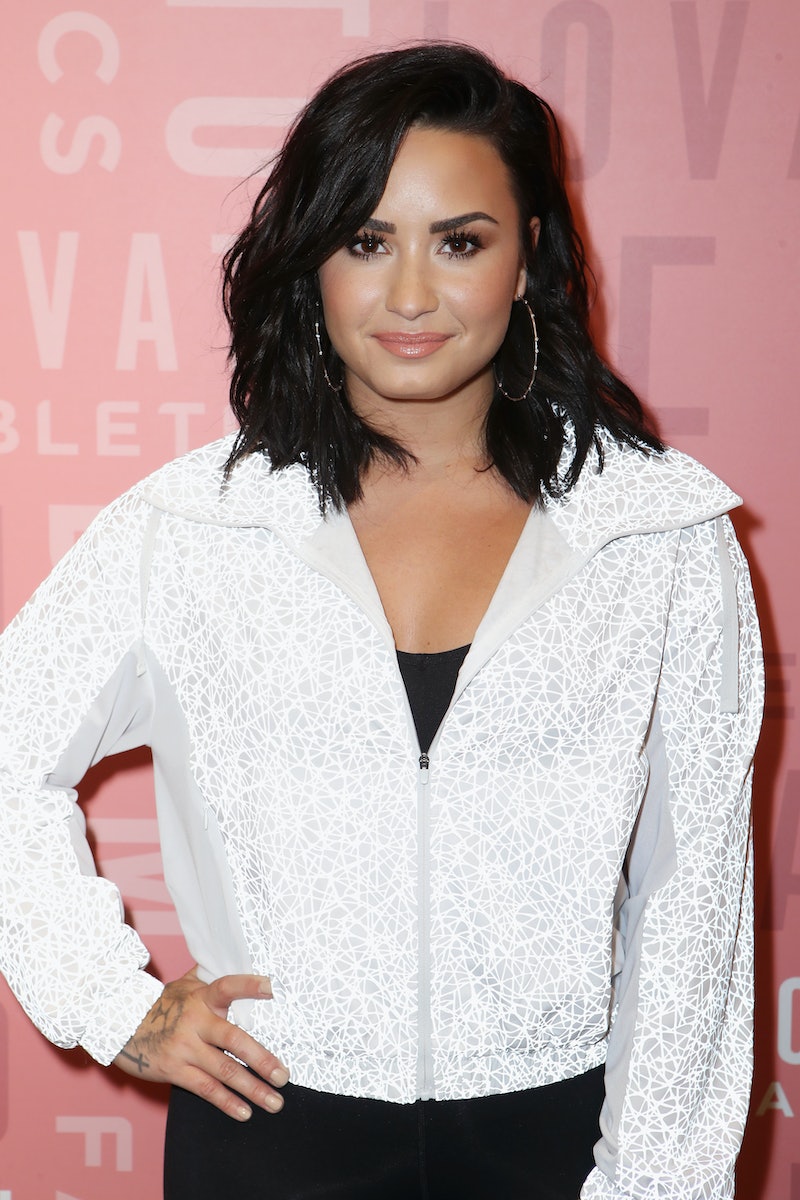 It hasn't been an easy year for her, but Demi Lovato's Christmas photos show she had a memorable holiday filled with family and love. Her celebration also looked like a really happy one, based on all of the snaps she posted of the dogs in attendance on her Instagram Story on Dec. 25. As she captioned one video, "It's really all about the dogs over here.." She wasn't joking. The "Fall In Line" singer shared a handful of photos and videos of the four dogs she celebrated with, and yes, they are super cute.

The puppies weren't the only good thing about Lovato's Christmas. As the 26-year-old musician shared on her IG Story, she rang in the most wonderful time of the year with her mom, Dianna de la Garza; stepfather, Eddie de la Garza; and her sisters, Dallas Lovato and Madison de la Garza. They all looked overjoyed to be spending the day together, especially after everything they've endured recently.

On July 24, TMZ reported Lovato had been hospitalized for an apparent overdose. After TMZ's report, her rep released the following statement to Bustle:

It wasn't until Aug. 5 that Lovato released her own statement on Instagram, commenting for the first time since the news of her hospitalization broke in July. "I now need time to heal and focus on my sobriety and road to recovery," she wrote. "The love you have all shown me will never be forgotten and I look forward to the day where I can say I came out on the other side. I will keep fighting."

Well, she's definitely kept fighting and look at her now. It seems like Lovato was able to have an enjoyable Christmas with her family and dogs by her side. You can check out the sweet photos below.

A loving message to her fans.

The puppies were adorably excited about their Christmas presents.

She clearly enjoyed every relaxing moment with her sweet dog, Batman.

Demi received two ornaments honoring her and ex-boyfriend Wilmer Valderrama's late pup, Buddy. Their puppy was sadly killed in July 2015 in a "tragic accident," which the singer confirmed on Twitter.

The holidays just aren't the same without Christmas cookies, right?

Prior to Christmas on Twitter on Dec. 21, Lovato addressed reports about her sobriety and made it clear that her journey is for her to tell and no one else.

"I love my fans, and hate tabloids," she wrote. "Don’t believe what you read. People will literally make up stuff to sell a story. Sickening." Lovato continued to tweet, "If I feel like the world needs to know something, I will tell them MYSELF. Otherwise people stop writing about my recovery, because it’s no one’s business but mine. I am sober and grateful to be alive and taking care of ME."

Lovato posted several other tweets stating that when she's ready to reveal details, she will do just that, but it will be on her terms. She wrote,

"Someday I’ll tell the world what exactly happened, why it happened and what my life is like today.. but until I’m ready to share that with people please stop prying and making up sh*t that you know nothing about. I still need space and time to heal.."

Despite all of the hardships Lovato has recently faced, it's wonderful to see her taking care of herself and doing so well, all while being able to enjoy Christmas with those she loves most by her side.