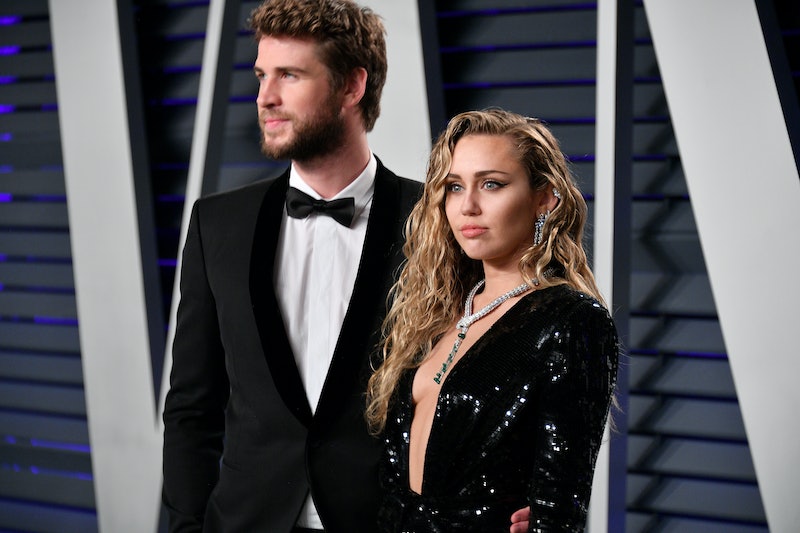 Nothing breaks like a heart that's just read the details about Miley Cyrus and Liam Hemsworth's split. On Saturday, Aug. 10. a representative for the singer confirmed to People that Cyrus and Hemsworth have separated.

In a statement provided to People, Cyrus’s rep said,

“Liam and Miley have agreed to separate at this time. Ever-evolving, changing as partners and individuals, they have decided this is what’s best while they both focus on themselves and careers. They still remain dedicated parents to all of their animals they share while lovingly taking this time apart. Please respect their process and privacy.”

Their relationship began over a decade ago when they met on the set of The Last Song, and they made their red carpet debut as a couple in 2010. The singer and The Hunger Games actor were on and off for the next several years, and on Dec. 23, 2018, they got married in a secret ceremony in Nashville. Eight months after they tied the knot, Cyrus and Hemsworth revealed that they are stepping away from their relationship.

According to E! News, a source said that the two “were drifting apart” and were apparently “trying to make it work for months now but haven’t felt they were connecting on the level they were feeling when they got married last year.” The source said that it has “been a rough year” for Hemsworth and Cyrus, adding that “they have been spending a lot of time apart." Another source told People that Cyrus “really fought to make it work” and "wanted to go to therapy."

E! News' aforementioned insider said that “they have decided they are at different points in their lives currently," noting that Hemsworth apparently is “focused on a more simplified lifestyle,” whereas on the flip side, Cyrus “has been preparing for a new wave of her music career." They apparently "really grew apart,” and E!'s source said the couple’s breakup “wasn’t a messy split.”

It may not have been a messy split, but that doesn’t necessarily mean it has been easy on the involved parties. When Daily Mail Australia asked Hemsworth about the breakup, he replied, “You don't understand what it's like. I don’t want to talk about it mate.”

The weekend the news broke, Miley was in Italy with Brandi Cyrus and The Hills: New Beginnings star Kaitlynn Carter. Carter and husband Brody Jenner announced they’d separated on Aug. 2, so one might say she and Miley were in the same figurative boat when they were on the same literal boat. (There has been speculation about the nature of Miley and Carter's relationship, but nothing's been confirmed.)

The day after her rep confirmed the separation, Cyrus seemingly addressed this life change on Instagram. She wrote,

“Don’t fight evolution, because you will never win. Like the mountain I am standing on top of , which was once under water , connected with Africa , change is inevitable. The Dolomites were not created over night, it was over millions of years that this magnificent beauty was formed. My dad always told me ‘Nature never hurries but it is always on time’…. it fills my heart with peace and hope KNOWING that is true. I was taught to respect the planet and its process and I am committed to doing the same with my own “

Their roads may converge once again at some point, or this really might be the end of their love story. No matter what happens, may happiness and peace come in Cyrus and Hemsworth's lives.