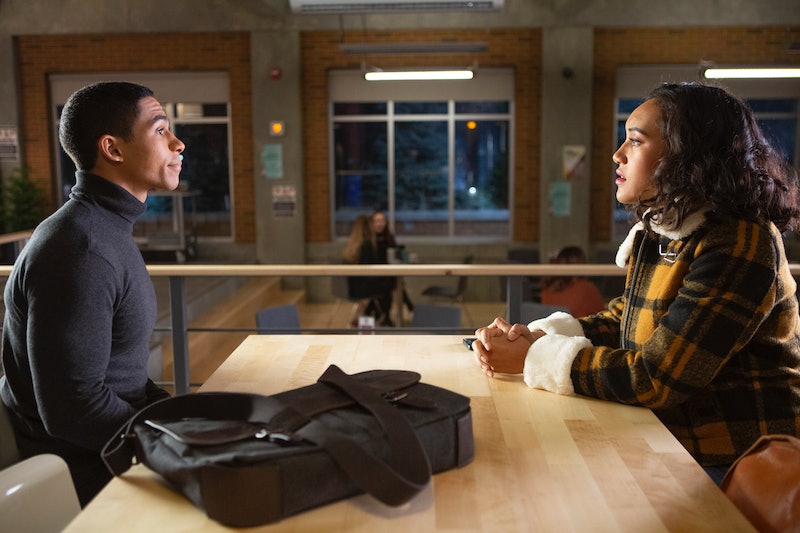 It’s not hard to understand why Nolan Hotchkiss was murdered on PLL: The Perfectionists. The kid was handsome, rich, and smart enough to get everyone else to do his bidding. He was also cruel, manipulative, mean-spirited, and willing to put himself above everybody, which makes him the perfect hot mean guy, kinda like Chuck Bass — and definitely a target for anyone who wanted to knock him down a peg. That person could be Mason, Nolan’s ex-best friend. But did Mason kill Nolan on The Perfectionists for real? It’s hard to trust his word.

Beacon Guard oversees, uh, every single thing that everyone on campus at Beacon Heights University does. Of course it does — Mona designed it. If the students or faculty party, it knows. If they go for a walk through the woods in the middle of the night to talk about how Nolan should die, it knows that, too. Right now, Dylan, Caitlin, and Ava have been slowly gathering (or trying to gather) evidence that Mason was the one responsible for Nolan’s death — not only does it take the heat off them, but it, you know, solves their friend’s murder. And Mason seems good for it. Not only does he have the motive of always playing second-fiddle to Nolan, but Nolan also stole Mason’s actual girlfriend, Caitlin, to be Nolan’s fake girlfriend. Nolan was the BMOC, and Mason definitely could have wanted that role.

On the April 24 episode of The Perfectionists, this theory that Mason had something to do with Nolan’s death could be shot to pieces. Thanks to Beacon Guard, Dylan, Caitlin, and Ava are told that Mason was nowhere near Nolan that night — he has a solid alibi, unfortunately. Now, this may not mean much, considering if Beacon Guard can examine personality traits and time out bowel movements (probably), it can probably lie to the police or have Dana Booker lie to everyone else. Mason has motive. Mason also knows everyone’s secrets, and he is a crap person to everyone except Caitlin. Does that make him a murderer? Not exactly, but it doesn’t exonerate him either, alibi or not.

There’s also a weird Pig Man creature running around the sewers right now, so besides Nolan’s murder, these Beacon Heights folks have other issues.

Mason may not be Nolan’s murderer, but here are a few others that could have dunnit.

Taylor faked her own death in order to run away from Beacon Heights, and right now, we’re all of the mind that Nolan knew about it and was supporting his sister. Taylor and Nolan were supposed to be close, but what if Taylor pushed him off that roof because he threatened to expose her running away? Their mother certainly wouldn’t be happy about it, and Nolan has been known to manipulate, uh, everyone around him.

Jeremy and Caitlin are secret lovers, mostly because Caitlin was Nolan’s fake girlfriend. We don’t know much about Jeremy right now, but there’s a level of creep in him — could he have gotten fed up with not being able to take his relationship with Caitlin public? That’s not the only reason they were on the down-low, but when does love make anyone rational?

Claire is in control of everything in Beacon Heights. Her daughter faked her own death. Her husband was murdered. Her son was murdered. Who is the common denominator in all of this tragedy? Claire! Under that cool exterior, there may be something truly sinister. Her own diligence in trying to solve Nolan’s murder could be to throw the police off the path that she is actually the murderer.

Nolan’s death won’t be resolved anytime soon on The Perfectionists, but the more clues viewers have, the more we’ll be able to try and figure out who’s behind Beacon Height’s latest tragedy.