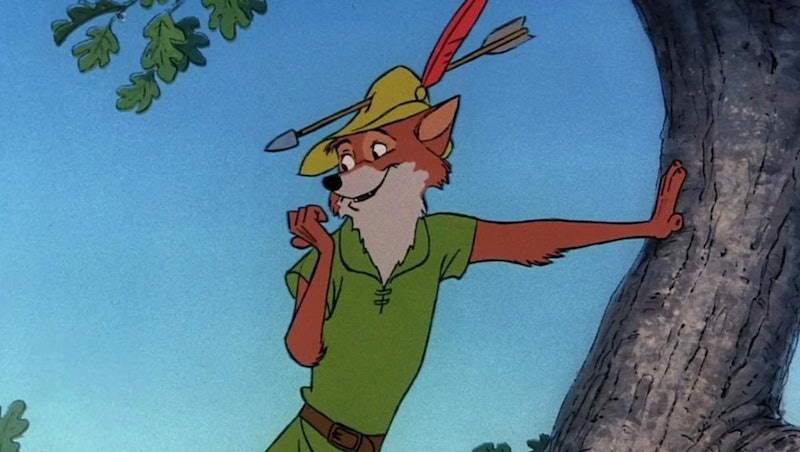 Belle, Simba, Mulan and Mowgli are about to add another iconic Disney character to the live-action remake club — and this time, it's everyone's favorite hot fox. On Friday, April 10, Deadline reported that Disney+ is developing a live-action Robin Hood remake in order to bring the classic story back to the screen once more. Kari Granlund, who wrote the 2019 update of Lady and the Tramp, will write the new script while Blindspotting director Carlos López Estrada is reportedly on board to direct the film.

Robin Hood — which was released in 1976 and has remained beloved by Disney fans throughout the decades — is a goofy, musical take on the classic tale of the notorious robber of Sherwood Forest, who stole from the rich in order to give to the poor. The movie also famously featured anthropomorphized animals; Robin Hood and Maid Marian were foxes, with Little John as a bear, Friar Tuck as a badger, and Prince John a cowardly lion.

According to The Hollywood Reporter, the updated version of Robin Hood will also feature some of the movie's classic songs and a mix of live-action and CGI animals in order to recreate the anthropomorphized characters. Right now, there are very few details about what else fans can expect from the Robin Hood remake, or when it will premiere on the streaming service, as THR reports that Disney and the creative team are still in the developmental stages of the project.

Robin Hood will join a long line of live-action remakes of classic Disney films, following in the footsteps of films like Maleficent, Cinderella, and Beauty and the Beast. In July 2019, Disney announced plans for a remake of The Little Mermaid, starring Halle Bailey as Ariel, and most recently, the studio revealed in January that they were working on a live-action update of Bambi, in the vein of The Lion King.

Several of those films — including Aladdin and The Jungle Book — have also already landed sequels to the live-action updates, although it's not clear yet whether or not those will be based on the infamous direct-to-video animated sequels from the 1990s and early 2000s. In addition to the big screen releases, with the launch of Disney+ in November, the studio has also been remaking classics specifically for the streaming service, like Lady and the Tramp.

Disney+ is also working on a spinoff series based on Billy Magnussen's character from the 2019 Aladdin remake, Prince Anders. According to The Hollywood Reporter, the series, which was announced in December, will reportedly follow the "overdressed" and "dim" prince on adventures around his home country, the fictional land of Skanland. Thus far, it's unclear whether or not Prince Anders will appear in the planned Aladdin sequel, or when his spinoff series will premiere on the streaming service.

Clearly, Disney has no plans to slow down when it comes to remaking some of their most iconic films for the modern era. With all of the live-action updates on the way, the only thing that remains to be seen is whether or not Disney will be able to find a real fox as crush-worthy as the animated Robin Hood.

More like this
12 Years Ago, Austin Butler Manifested His Oscar Nom In This Disney Movie Scene
By Jake Viswanath
James Cameron May Come To Regret His 'Titanic' Door Experiment
By Stephanie Topacio Long
Taylor Lautner Copped To Finding Jacob "A Little Annoying" In Twilight
By Stephanie Topacio Long
Reese Witherspoon Confirms This Fan Favorite Will Return For 'Legally Blonde 3'
By Jake Viswanath
Get Even More From Bustle — Sign Up For The Newsletter
From hair trends to relationship advice, our daily newsletter has everything you need to sound like a person who’s on TikTok, even if you aren’t.