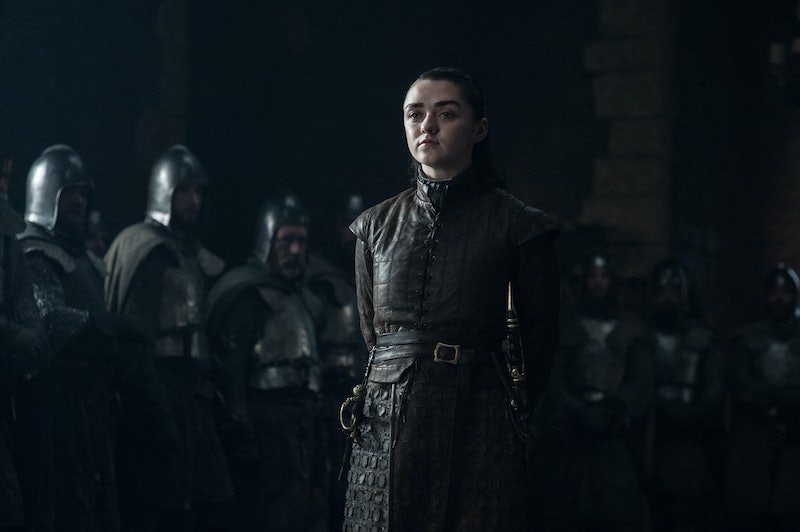 You know what we need more of? Game Of Thrones Season 8 rumours. Yep, I said it. Let's be real, this show, which has proven itself to be completely shocking time and time again, probably has the best season yet to come. Sad thing is though, new season means (if history is anything to go by) that we will be saying goodbye to lots of old favourites. So, does Arya Stark die in Game Of Thrones Season 8? Because real talk, that is one feminist icon I am not ready to lose.

Speaking to the Guardian, Maisie Williams, who plays Arya in the hit show, spoke about her final scenes. Now, considering the innumerable NDAs the cast and crew have had to sign, all the people involved have kept fairly shtum about what will happen in the final season of the addictive show. Meaning all us fans can do is basically take any tiny morsel of information and spin it until it fits whatever narrative we have created. Dreamy, right? Ideal.

However, what Williams said recently is low-key concerning re the fate of our girl — who has been getting her own back like a pro. She made it seem like, that she has come to the end, not only as an actor playing a character, but that in fact the character has ended as well.

She told the paper: "I got to the end and I didn’t want more. I had exhausted every possible piece of Arya. And this season was quite big for me. I had a lot more to do. Mainly because there’s just less characters now, so everyone’s got more to do."

The scariest comment she made regarding the character's role in the TV show was saying that in Arya's final scene she ended up "alone":

"It was beautiful. I ended on the perfect scene. I was alone – shocker! Arya’s always bloody alone."

Like, alone as in dead? Is that what you mean, babes? Oh gosh, the foreboding is real.

But like come on guys, they couldn't off our favourite character like that? It's not like they full on cut her dad's head off in the first effing season setting the precedent that honey, nobody is safe. Seriously. And do not get me started on to the carnage that was the flipping Red Wedding. Blimey, HBO really should have set up a help line after that or something honestly.

Our gal Arya has been super duper hard done by, from the beginning of the show. The tomboy refused to adhere to the behaviours expected of a young lady and instead chose to live her actual best life and twirl away every single one of those haters. OK, well, actually, not so much. More like she had to flee for her own safety and took her little sword needle and became a faceless woman hell bent on revenge cooked up with the main ingredient being murder. I am more like of a pacifist, so I am not sure if I would normally advocate all of this violence but like if anyone deserves to go on some bonkers faceless man murder spree it is Arya.

While many wish her to be at her sister Sansa's or brother Rob's side on the Iron Throne, these "alone" comments could maybe be her, like, on her own on the throne? Not only is that some great rhyming, that is also a pretty lit idea.