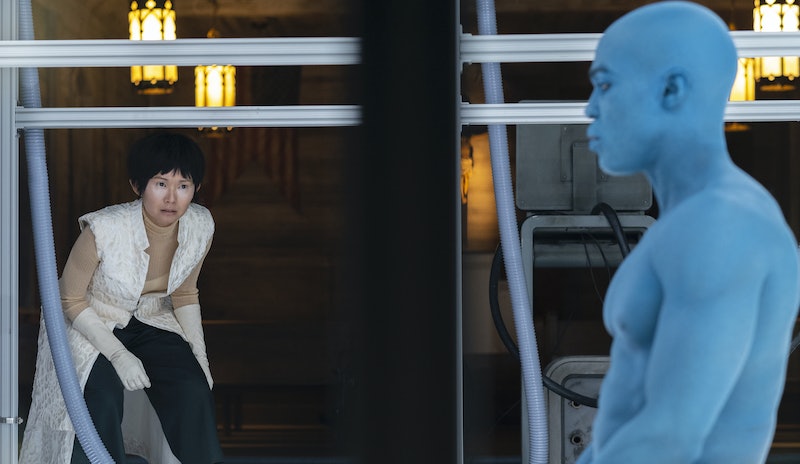 Spoilers ahead for the Watchmen Season 1 finale. Doctor Manhattan warned Angela that their love story would end tragically. But it wasn't until Lady Trieu's machine obliterated him in "See How They Fly" that it became clear that Dr. Manhattan really died on Watchmen. The HBO TV adaptation has highlighted how anything can happen in this story first established in the graphic novel by writer Alan Moore, artist Dave Gibbons, and colorist John Higgins. But if the egg he left for Angela is any indication, even Dr. Manhattan accepted his deadly fate.

While the 7th Kalvary and Cyclops thought they had come up with the perfect plan to transfer Dr. Manhattan's powers to Senator Joe Keene, Lady Trieu had piggybacked on their idea to gain the blue god's abilities herself. But just as Trieu thwarted Keene's plan, Adrian Veidt (Trieu's father) messed with hers by sending frozen squids to rain down on her. But by that point, the super-powered being known as Jon Osterman, Doctor Manhattan, and Cal Abar had already been destroyed by Trieu's Millennium Clock.

Within the finale, there are plenty of indications that Jon is truly gone. Right before Trieu's machine is activated, he told Angela that he didn't send her away to Karnak "because I don't want to be alone when I die." When Angela met her grandfather Will, AKA Hooded Justice, in the Dreamland Theater, she also confirmed Dr. Manhattan was gone. The marquee of the Dreamland Theater was used to pay homage to Doctor Manhattan as well with all the lights but "DR M" broken.

According to Will, Jon had asked him to make a deal with Lady Trieu, presumably as a way to orchestrate at least some aspects of his death by stopping the Seventh Kalvary and giving Veidt the chance to stop Trieu. Another one of Doctor Manhattan's final acts was to pass his powers to his wife. The series left this part of the plot open-ended, but it should act as proof that Jon Osterman is gone for good.

Even showrunner Damon Lindelof, who is hesitant to be definitive about any aspects of the series (including the prospect of a Season 2), has seemingly confirmed Dr. Manhattan's death. Whether it has been through his conversation on the official Watchmen podcast or in interviews with Rolling Stone, The Hollywood Reporter, and Vanity Fair, Lindelof has spoken of Dr. Manhattan as a member of the dearly departed. (Though not like the departed in that other Lindelof series.)

When Entertainment Weekly asked why Dr. Manhattan allowed himself to be killed, Lindelof explained, "In the case of Dr. Manhattan, once he sees the future, it's already happening. ... So while it plays like resignation and passivity, he's not even making a conscious choice because for him it’s already happened."

Even though his wife Angela had pleaded with him to fight off Trieu's machine, Dr. Manhattan viewed his death as inevitable. But what he could impact was passing on his powers to her, so she may have the chance to "do more" to help than he did while on Earth. For his part, Yahya Abdul-Mateen II told the New York Post he would be open to portraying Dr. Manhattan again if somehow he was needed. But the only way it seems Dr. Manhattan could appear on any potential future Watchmen seasons would be through memories or the powers of Angela Abar.