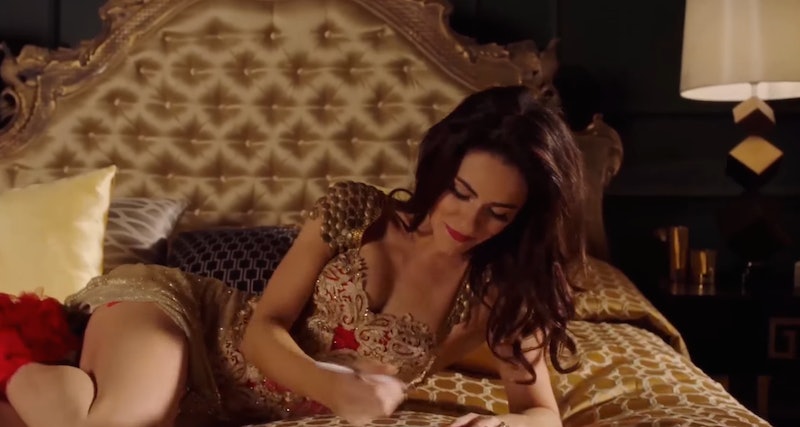 Even though the holiday season is over, E!'s royal family gave fans a Christmas treat during the Jan. 15 episode with a musical performance from Princess Eleanor on The Royals. However, while the episode started on a high note (pun intended), it ended horribly for the princess since Jasper broke up with Eleanor. But let's focus on the good for now with Eleanor's delightful showstopper that started The Royals Christmas episode on Jan. 15.

As if Loyals didn't already love the actress who plays Eleanor, Alexandra Park, enough, she showed her range with a joyful musical number during the episode, "More Than Kin, and Less Than Kind." Eleanor loves Christmas, so it was fitting that while she was writing a letter to Jasper about how much she loved him that she broke into song. And Park's performance of "Walking in a Winter Wonderland" was so festive and fun (and good!), that it put me back in the holiday spirit even though Christmas happened weeks before the episode aired.

Unfortunately, Eleanor's bliss ended after that when Jasper broke up with her. His intentions were in the spirit of Christmas though since he did it to protect his love. Still, I'd much prefer to think about Eleanor and Jasper sexily dancing around together happily like they did during the musical number rather than breaking up.

To look on the bright side, as Eleanor did during her fab musical number, at least she didn't let Jasper ending things break her. Instead, she delivered an inspired Christmas speech to the U.K. in honor of her dead father. Still, I would have preferred if Eleanor's Christmas musical dream could have been her reality. Also, can The Royals please give fans more musical numbers from now on? I'd gladly accept another song from Park as a belated Christmas gift to make up for the Jasper and Eleanor breakup.