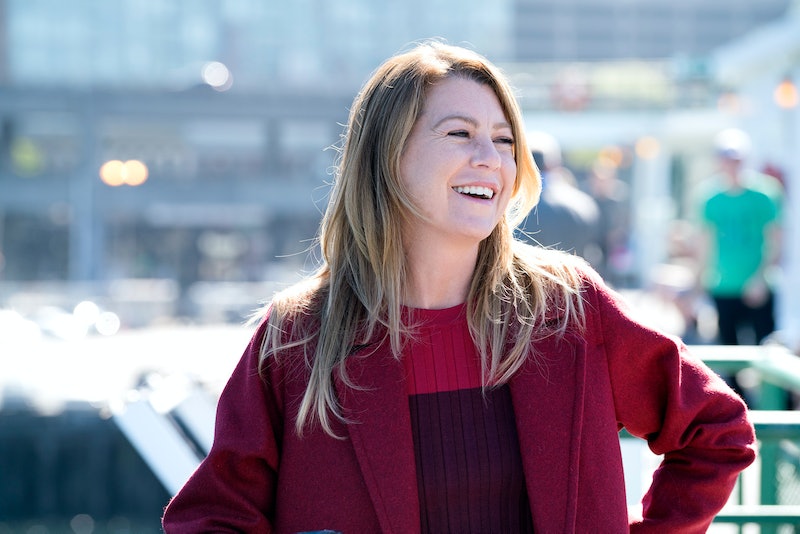 Even if Grey Sloan Memorial Hospital was still called Seattle Grace the last time you checked in on Grey's Anatomy, this news will likely still delight you. According to TVLine, Ellen Pompeo is directing an episode of Grey's Anatomy this spring that could prove to be a special one for longtime fans of the series. The outing doesn't have a title yet, but there are reportedly plans for the episode to feature flashbacks to Alex's troubled teenage past.

Out of the show's original five interns, Alex and Meredith are the only two still on the show, and they have become each other's people over the past 14 years. The onscreen friendship between them remains a highlight of the series, and in many ways, the Alex-Mer of it all keeps Grey's Anatomy connected to its roots. That's why having Pompeo step behind the camera to helm an episode set to delve into Alex's history feels so important— these two actors have been working together for more than a decade, so it's safe to say they understand each other by now. There's no one better suited to handle such a character-rich episode than Pompeo.

For the record, this isn't Pompeo's first time taking a seat in the director's chair. She made her Grey's Anatomy directorial debut with last season's "Be Still, My Soul." That episode wasn't exactly a light one either, as it featured Maggie dealing with the death of her mother. The Alex episode is bound to be similarly emotionally challenging, so you might want to have a box of Kleenex at the ready.

Pompeo's episode is still in the early stages right now, so there's a chance the details could change. However, TVLine reports that casting is underway for an actor to play young Alex. Over the years, Grey's Anatomy has explored Alex's past by having members of his family reappear in his life, but seeing his pain when it was still so fresh is sure to be heartbreaking.

Alex's father was an abusive drug addict, and his mother is schizophrenic. Growing up, it fell on him to protect his siblings, but Alex and his brother and sister all ended up in foster care. While his siblings were only moved around a few times, Alex switched homes more than a dozen times. The lack of stability and painful relationship with his parents had a lasting effect on Alex.

He's grown a great deal in the 14 years since the show began, but it's never easy for Alex to confront his past. It's unclear what will trigger him to flashback to his teen years, but you can bet whatever it is will leave Alex fans sobbing. Thankfully, Pompeo will be the one guiding Alex's story, which should lead to some stellar moments for actor Justin Chambers.

As Grey's Anatomy's leading lady, Pompeo has a unique perspective on the show and the characters. Just as she helped add a feeling of intimacy to her directorial debut, Pompeo is sure to add a whole new layer to Alex's story with her style. Even though she's not writing the episode, Pompeo will be responsible for drawing out pitch perfect performances from her castmates, and ensuring that young Alex's story resonates with viewers.

Given the strength of the Alex and Meredith friendship, there's likely to be at least one powerful scene between these two characters in the spring outing. There's already plenty to love about the show having Pompeo direct an episode about Meredith's best friend, but adding in some pivotal onscreen interactions between these pals will make the whole hour even more of a treat.

One thing is certain, Pompeo's second directing effort is shaping up to be one that longtime fans of Grey's Anatomy shouldn't miss.