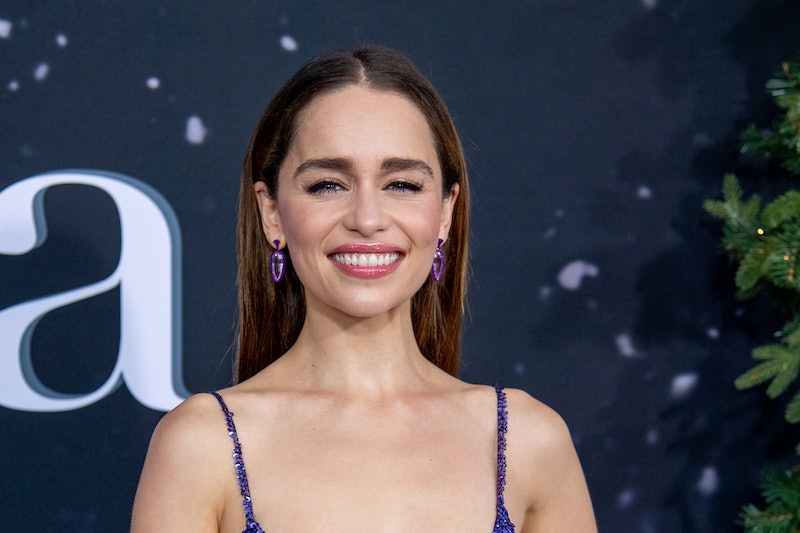 If you're thinking of looking up the big "twist" in Last Christmas before seeing it in theaters, be prepared to face the wrath of the Mother of Dragons herself. In a recent interview with IndieWire, Emilia Clarke asked people to stop spoiling the big twist in Last Christmas online, so that people can enjoy the development in context with the rest of the movie itself. "It’s bloody annoying. Frustrating," Clarke told the outlet, when asked how she felt about seeing the film's twist shared online. Besides, she added, "it’s more complicated than people are guessing."

In the movie, Clarke plays Kate, a cynical Londoner who works in a Christmas store and is trying to distract herself from a recent medical emergency by drinking and shirking her responsibilities. However, one day she meets the handsome Tom (played by Henry Golding), and learns to open her heart once more to the people she loves and the joy of the holiday season. As for the movie's big twist, Clarke said that Emma Thompson (who also plays Kate's mother) and her husband, Greg Wise — who developed the script — spent a great deal of time ensuring that the reveal would have an impact on audiences.

"Emma and Greg wrote this script together, but they sent the script to all of their friends and it was only ready when their friends didn’t see the twist coming and couldn’t guess until it happens, so that’s where it comes from," Clarke said. "It’s just frustrating."

While she's not happy about the fact that Last Christmas' twist is being shared all around the Internet, Clarke does understand fans' instinct to share spoilers and speak out about their feelings on the twists and turns that certain projects take. "I’m careful with what the way that I’m wording this, but it’s no surprise, it’s common knowledge that the state of our world at the moment is scared and confused and there’s a lot of stuff going on that’s completely out of our control," Clarke said. "So when it comes to signing petitions to reshoot the last season of a very popular TV show, or whether it’s spoiling a g*ddamn Christmas rom-com, people are able to do something about that."

She continued, "That’s something within their own control, unlike the rather turbulent political environment that we seem to be living in. Our world’s literally on fire, so I think that there’s a lot of things outside of people’s control, so when it comes to this kind of stuff, they can do something with it and want to. It’s done with so much fervor, it’s done with a huge amount of energy and all that is, is misdirected energy."

As Clarke implied with her reference to the now-infamous Game of Thrones petition, this is not the first time that the actor has dealt with a strong fan response regarding one of her projects. In October, Clarke told The Telegraph that although she wasn't a big fan of the way Daenerys' story ended in Season 8 of Game of Thrones, she was sad to see the intense backlash that the final season received from fans.

"I was too busy focusing on my own reactions to really pay too much attention, if any at all," Clarke explained. "The only thing I felt truthfully sad about was that [creators David Benioff and D.B. Weiss] are my really good friends, and so it’s for them that I feel heartbreak, because it’s theirs." She continued, "It sucks this wasn’t the perfect ending that people were hoping for, but I truly believe we would never have made everyone happy."

After all of the backlash that Clarke and her storyline in particular had to deal with after the Game of Thrones finale, the least that moviegoers can do is let people enjoy her foray into holiday rom coms in unspoiled bliss.