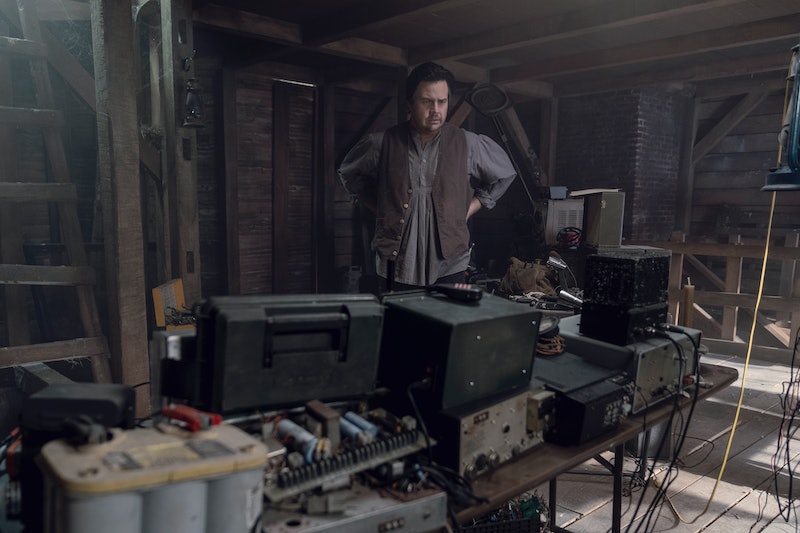 Spoilers ahead for The Walking Dead Season 10, Episode 6. While it was being true to its comic origins, The Walking Dead may have reminded you of Stranger Things 3 when sparks flew for Eugene over the radio waves. Eugene potentially made a connection to a new community — and a possible love connection — through talking to the woman on the radio in The Walking Dead. Following Rosita's rejection, he seemed awfully interested in this mystery woman and appeared to throw caution to the wind when it came to disclosing personal details. Depending on her identity, Eugene could be putting the communities of Hilltop, Alexandria, and Oceanside in danger. But if it goes the way of the comics, Eugene might find himself with a new love interest.

A lonely Eugene has secluded himself at Hilltop working on the radio system. When Rosita didn't call him back from Alexandria after getting sick, he miraculously connected to a woman from another community. She was understandably hesitant to share any information, But through their personal stories, they connect and Eugene asked that they keep the lines of communication open. Eugene claimed a "twinge in my belly" tells him that she's a good person and he gave her his full name.

She didn't offer her name in return, but the woman agreed to keep speaking with Eugene if they keep their radio correspondence a secret. While she could just be cautious as one should be about fellow humans in the zombie apocalypse, she's calling the shots in this radio relationship and it could be bad news for Eugene — and everyone else. As the woman herself said, "Who's to say I'm not a threat to you?"

When the trailer for Episode 6 was posted to YouTube, fans wondered in the comments if the person on the radio could be Jadis, Maggie, or even Rick. Rick (or someone with him) was also a popular theory when The Walking Dead Season 9 finale teased a voice on the radio. But Skybound Entertainment, the company behind the comics, outlined back then in its episodic breakdown of the comics vs. the show how the person was more likely the comic character Stephanie. And "Bonds" indeed seems to prove that the woman is Stephanie from the Commonwealth. Minor comic spoilers ahead.

The Commonwealth is a large, rather evolved community in the comics located in Ohio. Considering the woman on the radio said she was from Stroudsburg, Pennsylvania, it seems very likely that this is the show's introduction to this community. Other clues that the woman is Stephanie include their conversation about trains and the fact that she insisted she will only speak to Eugene — all elements that connect back to the comics.

Eugene becomes the communication point person between the survivors' communities and the Commonwealth through Stephanie, leading to the groups of people finally coinciding. Plus, Eugene gets to experience a bit of requited romance. Yet, just because a Commonwealth connection is good for Eugene, doesn't mean the introduction of this crew won't cause some major drama for the TV series. For now though, enjoy "Tater Bud" Eugene on The Walking Dead TV series getting his "Dusty Bun" Dustin on with this new character on the radio.