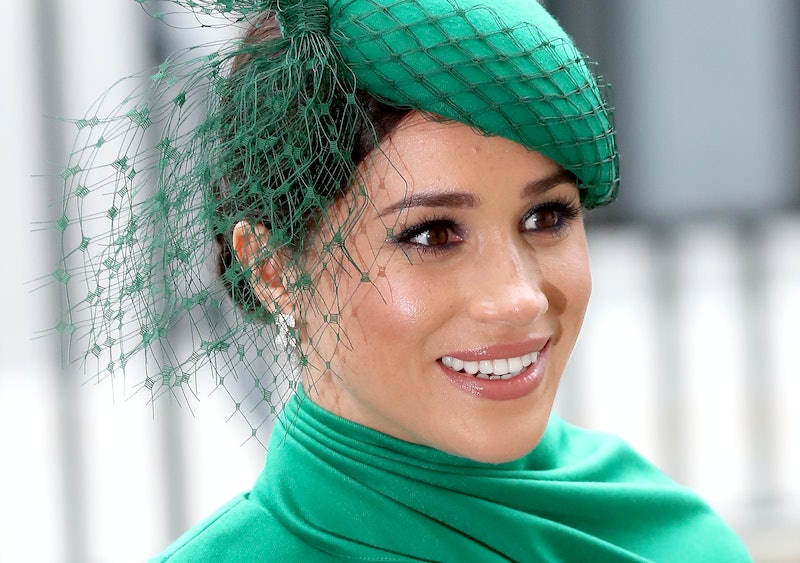 While The Duchess of Sussex's fashion choices are often the topic of conversation when it comes to her style, Meghan Markle's beauty looks are nothing to balk at. The soon-to-be inactive royal family member has always had a signature look, but that hasn't stopped her from breaking a few royal beauty rules along the way.

In her final days as an active member of the royal family, Markle broke a multitude of beauty rules, but she's been doing it ever since she was engaged to Prince Harry. From her messy bun to her manicures, Markle has always bucked conventional rules from the palace. While the exact specifications of the makeup, hair, and manicure rules that the royal women have to follow aren't known, many royal experts have chimed in about what's expected, and Markle has broken some of the most well known ones.

Now that her time as an official royal family member is coming to an end — March 31 is when she and Prince Harry will officially wrap up duties — it's time to look back at all of the moments Markle got a little rebellious in the most chic way and hope that there's even more to come now that she's no longer royal.

Markle's messy bun has been breaking royal beauty rules even before her marriage. According to Cosmopolitan, the women in the royal family are required to have sleek and neat styles. In fact, Kate Middleton even wears a hairnet on occasion. But not Markle. This look has spawned 1,000 tutorials and has become her signature style.

While Markle does tend to wear nude toned lipsticks and balms, during Christmas 2017, she attended the Queen's Christmas lunch wearing lip gloss, which allegedly is a no-no to prevent hair from getting stuck to the lips during royal events. Given the private nature of the occasion, it's likely why she chose to wear it.

Makeup for the royals is required to be simple and minimal. However, when attending the 2017 Christmas service at Sandringham, Markle's bronzed and flushed cheeks were heavier than what is normally "allowed."

Markle's smoky eye has always been her staple — even at her wedding. While the Duchess' skin is typically natural and glowing with her freckles showing through, her deep, warm smoky look was certainly different from other royal wedding makeup.

One of the British Monarchy's most well-known rules is natural nails. The Queen's penchant for Essie's Ballet Slipper nail polish is infamous. The light pink shade was worn by both Markle and sister-in-law Kate Middleton on their wedding days, but Markle's manicure at the British Fashion Awards was a massive departure.

During Markle's last events before leaving royal life, the Duchess of Sussex really went there with her beauty looks. At the Endeavor Awards, Markle chose a glossy and bold berry-toned lip that she paired with a much more amped up smoky eye. In fact, it was the most makeup the Duchess has ever worn.

In her last appearance, Markle went out with a bang — a blue one, to be specific. The Duchess' Commonwealth Day makeup featured a gorgeous, metallic blue smoky eye that was the perfect send-off to her duties.

More like this
The Best Beauty Looks Spotted At Paris Couture Week 2023
By Audrey Noble
Amanda Gorman’s Makeup Artist Breaks Down The Poet's 2023 Grammys Glam
By Olivia Rose Rushing
Selena Gomez Posted A No-Makeup Selfie & We Stan A Relatable Queen
By Olivia Rose Rushing
Kim K, Oprah, & Jennifer Lopez Celebrated 25 Years Of Anastasia Beverly Hills
By Olivia Rose Rushing
Get Even More From Bustle — Sign Up For The Newsletter
From hair trends to relationship advice, our daily newsletter has everything you need to sound like a person who’s on TikTok, even if you aren’t.