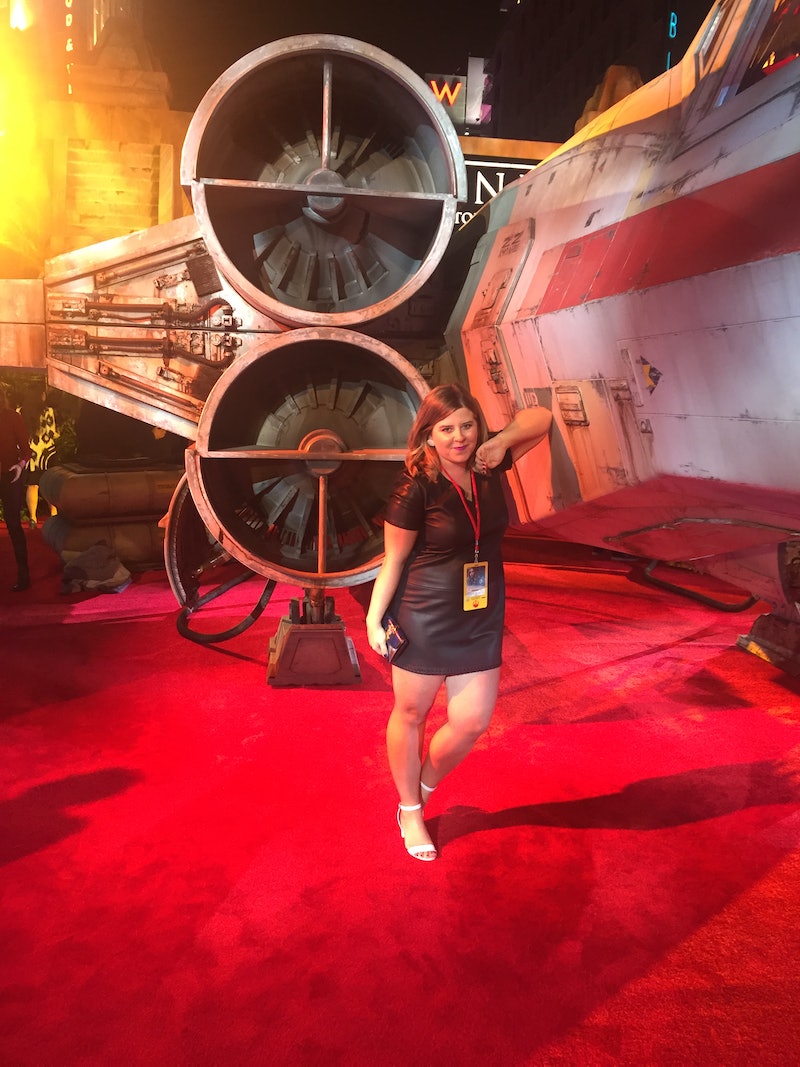 A staple of my childhood, like so many folks of the nerdy persuasion, was a tattered, well-worn VHS copy of The Empire Strikes Back. And thanks to my brother and me watching the tape of the second installment of the Star Wars saga at least once a week for a total of 10 years, it was nearly unwatchable by the time it went missing (I learned firsthand that you can, in fact, watch a tape too many times). Our brand of Star Wars fandom also meant we were entirely devoted to every video game offshoot of our favorite film franchise — fellow geeks will recognize such titles as Yoda Stories, The Masters Of Teräs Käsi, and the original Star Wars: Battlefront (a game in which I was adept at taking down Stormtroopers by exclusively shooting them in the knees). My childhood largely took place in a galaxy far, far away, but then I reached my freshman year of high school. The new Star Wars trilogy arrived and with it, came my fandom in full force — I took the opportunity to experience midnight screenings with folks bearing lightsabers and cosplay and merchandise like t-shirts, posters, toys, and even school supplies. The only problem was literally everyone else I knew at school: The moment I wore a Queen Amidala shirt to school and was promptly mocked, not for being geeky, but for being childish as a result of my geekiness.

Just like that, my fandom went into hiding, like Ol' Ben Kenobi in the Tatooine desert. If there was one thing I've refused to be known as since I was old enough to talk, it was immature.

The architect of this entire universe — George Lucas himself — has said that the franchise is for "12-year-olds." And here I was, a grown-ass woman, finding true happiness and comfort in just embracing the damn thing.

But fandom isn't childish — it just took me a bit longer to start believing that thanks to that early roadblock. As I got older, I let it eke back in — I used old Star Wars video games and my DVD copies of the original trilogy as creature comforts to set me right when college papers or my first big job or my first real breakup made life a little tough. But it remained a hidden, secret home alone behavior until I started inching closer to 30. A new film was about to come out (The Force Awakens), and the whole world seemed to be as excited as I was. When I saw the film and it was everything I hoped, I leaned into that fandom high hard. I bought t-shirts and phone cases and things that other humans might actually see outside of the privacy of my own home. I went to Star Wars-specific conventions and cried at the sight of little girls dressed up as their favorite hero, Daisy Ridley’s Rey. I started referring to Mark Hamill as “space dad.” My co-workers began to know me for my fandom so much so that, on numerous occasions, I’ve had people swing by my desk just to ask me a question about the franchise. At holidays, I received more Star Wars gifts than I knew what to do with. And while the architect of this entire universe — George Lucas himself — has said that the franchise is for "12-year-olds" (uh, rude, sir), here I was, a grown-ass woman, finding true happiness and comfort in just embracing the damn thing. To my genuine surprise, it was absolutely liberating.

And yet, there are still those who trivialize such dedication. They dismiss it as too involved, too spacey, too goofy, and the most painful one: too juvenile. Whether it’s my phone case (a prototype of the poster for Star Wars: A New Hope that one person dubbed “gross ‘70s van art”) or a winter hat adorned with Darth Vader helmets and AT-ATs (“That’s probably made for kids, right?” is a thing an actual human said to me when I wore it in public for the first time), decking myself in gear from my fandom of choice continually invites commentary — and not always the complimentary kind. Apparently, my affinity for characters who struggle with harsh truths about their families and rage against the machine of oppression throughout a fictional galaxy (not relatable concepts in 2018 at all, nope) is perplexing to those who don’t buy in — despite the fact that the films the fandom is based on are some of the biggest, most financially successful films in the history of cinema (NBD). But there’s something I’ve discovered as a late-to-fandom adult: there are lots of us, and there’s got to be a reason we all convene around something that’s allegedly just for kids.

“Fandoms create a sense of community, which people need to feel supported and understood. (We're social creatures after all),” writes licensed psychologist and founder of Miami Shrinks, Erika Martinez in an email to Bustle. “It's no different to being a part of a book club, a quilting/knitting bee, or a bridge club.”

Fandom communities can be some of the most accepting, mature, wonderful places to find oneself as an adult.

And for many women, that’s what fandom largely boils down to: a community they can count on. “I’ve made many close friends through going to conventions or nerding out about similar interests. It brings us together in a way few other things can, it’s like being part of a not-so-secret club,” says Victoria, a 29-year-old museum professional whose fandoms include Harry Potter, anime, and Star Wars. For Jess, a 27-year-woman working in book publishing, it’s even made it easier to make friends at work. “It immediately connects me to other people. In my work environment, it's so easy to make friends with someone else simply by asking what shows they're into until you find one that you are both obsessed with,” she says.

It even has the power to turn back time, and right past wrongs. That’s what happened to Joy, a 33-year-old high school teacher and Doctor Who mega-fan. “I had bad experiences with female friendship in my teens, leading me to believe that I was a girl who couldn't be friends with other girls. I am so thrilled to have been proven wrong by the wonderful friendships I've formed in fandom spaces as an adult,” she says. “The women I've encountered through fandom have been nothing but supportive and affirming and the best thing has been discovering all the things we share in common outside of the fandoms we love.”

In many ways, in fact, fandom communities can be some of the most accepting, mature, wonderful places to find oneself as an adult. While Comic-Cons and Star Wars Celebrations are places where I’ve experienced harassment by apparently misogynistic male fans (including one who called me “toots” and asked if it would "compromise my journalistic integrity" to stand in line and buy a sandwich for him so he wouldn’t lose his place in a panel line we were both waiting in), they are also the places I’ve encountered the kindest, most conscientious humans, who recognize the spirit of the fandoms we love and act on them.

These are places where I've seen young girls being taught by their fandom-loving parents that they could be the heroes of their own stories, and young boys being shown that their heroes can be women just as often as they can be men (ask me how many times I’ve cried over a little boy playing with a Wonder Woman or Rey doll, I dare you). These are spaces where creativity, confidence, and perseverance are praised, passed on, and valued above all. Where we are shown, via fantasy worlds, that against all odds, we can be more, we can rise above, we can find a better way. None of these things feel particularly kid-specific — in fact, I’d argue that I didn’t truly understand heroes like Luke Skywalker, Princess Leia, Spider-Man, or Batman until I grew up, experienced a bit of real life, and came back for a series of formative ah-ha moments. But some of the women I spoke to say that some of their friends can look at conventions, cosplay, and other fandom activities as juvenile. And according to experts, there’s a reason for that.

Finding joy and optimism in worlds that have wizards, laser swords and mind powers, super serums, and glowing ropes that can convince any human to tell the truth might seem goofy, outlandish, and unfit for adult conversation.

“There's usually something that people that participate in fandoms deeply connect with — whether it be a part of their childhood, a value they hold dear, or the ability to let their inner child out to play,” says Martinez. “Those that perceive fandoms as juvenile or strange are casting judgment, usually because they're not comfortable openly connecting with these parts of themselves.”

And the joke is on those who won't embrace their inner child and who can’t seem to understand why adults participate in something fantastical, as so many fandoms tend to be: According to both Martinez and Clarissa Silva, a behavioral scientist and relationship coach based in New York City, there are many very real benefits on leaning on into your geekier inclinations.

“The community provides you with ‘common currency’ and shared experience. They share a language, storyline, character rivalries, etc. that helps [fans] escape from everyday stress,” Silva tells Bustle, adding that she believes participating in these circles can boost self-esteem and happiness.

Martinez points out that fandom can help people stay “connected to a part of themselves that retains that child-like wonderment” — something that so many people strive to retain long after jobs and responsibilities start to weight on us. “I think it does make people happier. For so many people, adulthood means having to leave behind the past-times they enjoyed during childhood in favor of work and responsibilities. Fandoms can provide adults with a creative outlet and a means of relaxation, promoting greater life balance.”

And while these fandoms often come with toxic pockets (like the set that went after The Last Jedi star Kelly Marie Tran, who was bullied off social media in May), that can make it hard or frustrating to be a part of the community, for the most part, I have to side with Martinez and Silva. Since I've ripped away the self-consciousness, the worry, and disallowed other adults to make me feel childish for literally blocking out a week in the summer of 2019 to visit the Star Wars section of Disneyland when it opens, I've felt lighter, happier, and more myself than ever before. I've made new friends with other fans in the community — some of whom I might never have spoken to if I didn't allow myself to come into geeky spaces. I've learned more about myself, and allowed my fandoms from Star Wars to Marvel, to Wonder Woman and Game of Thrones, to act as beacons of hope — sources of inspiration when the world around us seems to be crumbling at every turn.

Finding joy and optimism in worlds that have wizards, laser swords and mind powers, super serums, and glowing ropes that can convince any human to tell the truth might seem goofy, outlandish, and unfit for adult conversation. And often, the first two descriptors are fair. I've learned that there will always be those who think the Millennium Falcon is a plaything for children and that an entire movie about a giant, purple dude seeking out rainbow colored gems for world domination is ridiculous. That's their right and their choice.

But here's the thing: These worlds make me, and other grown-ass women like me, so impossibly, irrevocably, irrationally happy. And being self-aware enough to find what makes you happy and actually pursue it in your daily life? Well, that sounds pretty damn mature, if I do say so myself.