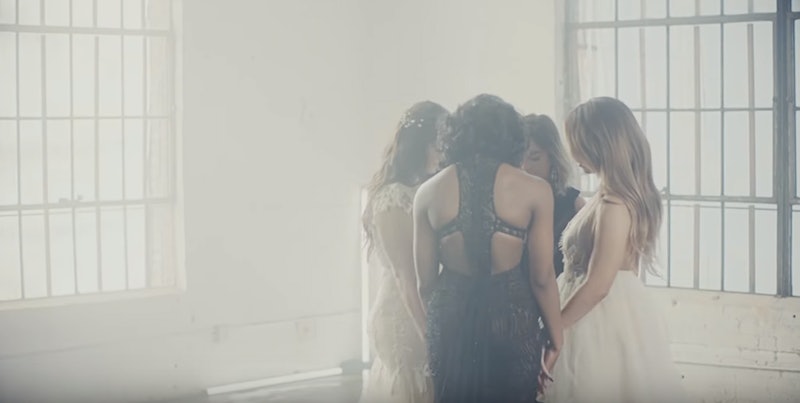 Fifth Harmony/YouTube
By Alexis Rhiannon
May 18, 2018

For fans of a certain girl group, Friday was a sad day, as it heralded the release of Fifth Harmony's final music video — ever. But even if tears fill your eyes during the majority of "Don't Say You Love Me," make sure you wipe them away by the end, or you could miss the moment in the video hinting at a potential 5H reunion. As the end of the three-minute-and-19 second track approaches, each remaining member of 5H — Ally Brooke, Normani Kordei, Dinah Jane, and Lauren Jauregui — sings her goodbye and sadly exits through a door, symbolically beginning the group's hiatus, announced in March.

But for all the sadness and symbolism inherent in exiting both this video and the age of Fifth Harmony, there's more optimistic symbolism waiting just around the corner. As the last few notes of "Don't Say You Love Me" echo, the door that all four women have recently exited out of seems about to close. But in the final seconds of the video, it swings slightly wider again, letting in a beam of light to pierce this moment of darkness that fans may find themselves in at the moment.

The women haven't gone on the record about this particular scene since the video's May 18 release, but it does seem to be a deliberate one. And depending on how desperate you are to believe that this isn't the end for the girl group — read: very — this could be read as a glimmer of hope. The foursome could be read as quite literally leaving the door open to a future collaboration, which is a very exciting proposition.

In fact, when you really start looking at it, the video is full of moments just as weighted as the open door imagery. For example, there are the outfits; two of the women are dressed in white, as if for a wedding and two are dressed in black, as if for a funeral. Both events are milestones, but to be honored in different ways, either through celebration or mourning. And the takeaway from "Don't Say You Love Me" seems to be that one moment can contain both things — Fifth Harmony is simultaneously celebrating the time they spent together, and mourning what will no longer be.

It's a beautiful sentiment that plays out in the video's direction. Though the four women do at times appear on screen together, they stand alone for the majority of the time, singing directly into the camera, and reaching out for the viewer. Then, before they part ways, they join in a circle, holding hands as if drawing strength from one another one last time before they walk away. (Is there a ton of dust in here or are these — oh, they're tears.)

Kordei is the first to leave, looking over her shoulder as she sadly closes the door behind her, followed by Jane, and then Jauregui. Finally, Brooke finishes singing and steps through the doorway herself, but it isn't a sad moment. She steps into a square of sunshine that seems to promise that the future is quite literally bright for these four, even if they don't remain a foursome. After all, look what they've already been through in their journey from a fivesome to a foursome after Camila Cabello left the group. Both she and Fifth Harmony were able to coexist and find success at the same time, and her experience bodes well for the rest of her former bandmates as well.

It may be the end of 5H's relationship as a girl group, but it's just the beginning of their relationship as independent, solo artists finding their own voices. And if this video is any indication, there's a lot of potential down the road for these ladies to find their way back together again, after they've done a little soul-searching and figured out exactly what they want.

More like this
Who Is Camila Cabello Dating? She's Getting Cozy With Lox Club CEO Austin Kevitch
By Radhika Menon
Leona Lewis & Husband Dennis Jauch Welcomed Their First Child
By Darshita Goyal
Who Is Bad Bunny Dating? Gabriela Berlingeri's Vocals Are Featured On His Song "En Casita"
By Radhika Menon
Demi Lovato's New Song "29" Hints At Their Age Gap From Ex-Boyfriend Wilmer Valderrama
By Jake Viswanath
Get Even More From Bustle — Sign Up For The Newsletter