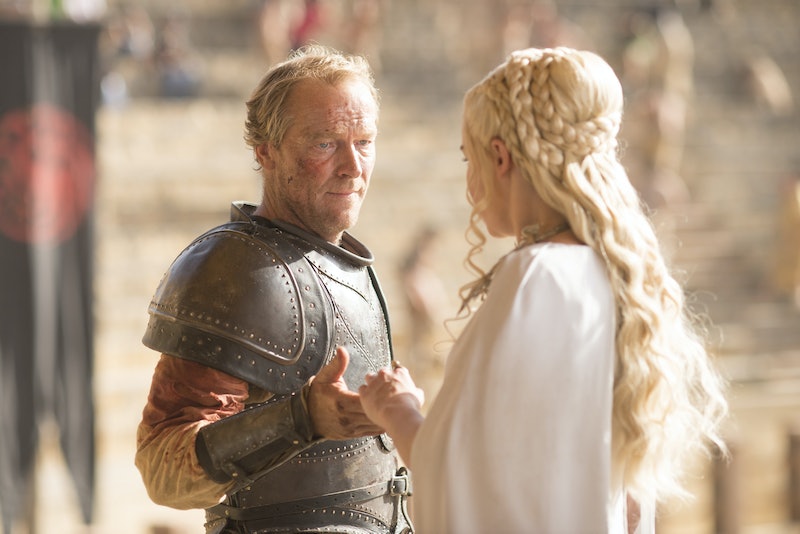 No one in Westeros is completely innocent, but the idea that the Mother of Dragons may turn to the dark side still seems far-fatched. A popular fan theory suggests the Targaryen Queen will follow in the footsteps of her father, Mad King Aerys, but Ser Jorah is having none of that. In an interview with The Huffington Post, actor Iain Glen revealed he doesn't think Daenerys will go mad like her father.

The actor was quick to note that the only people who know what lies ahead in the final two seasons of Game of Thrones are the writers, but speaking both for himself and Jorah, he's Team Dany all the way. Glen said:

Daenerys can be ruthless when she needs to be, and she's definitely shown that she has no issue with burning men alive. If they're bad men. What sets her apart from other characters who have done questionable things in pursuit of the Iron Throne is her altruism. Ultimately, the Dragon Queen puts her people first. If she didn't care about what happened to her followers, then she never would have chained her dragons. And she certainly wouldn't have spent much time trying to ensure Meereen was stable before setting off for Westeros at the end of Season 6.

To have Daenerys become evil at this late stage of the game would do a great disservice to the character's journey. She's the ultimate champion for the underdogs because she was one herself. This is a woman who was traded by her own brother for an army in Season 1. That she has become a leader in her own right is remarkable, but it's even more astonishing that she's a good one. Given everything she's been through, no one could've blamed her if she had become power-mad. But that's just not who she is at her core.

Glen and Ser Jorah are right to stand with Daenerys. She's not perfect, and she will show no mercy to those who attack her or her people, but she's not her father. She is Daenerys Stormborn of the House Targaryen, First of Her Name, the Unburnt, Queen of the Andals and the First Men, Khaleesi of the Great Grass Sea, Breaker of Chains, and Mother of Dragons. As long as the people of Westeros keep that in mind, it's highly unlikely their future queen will carry on her family's less savory traditions.