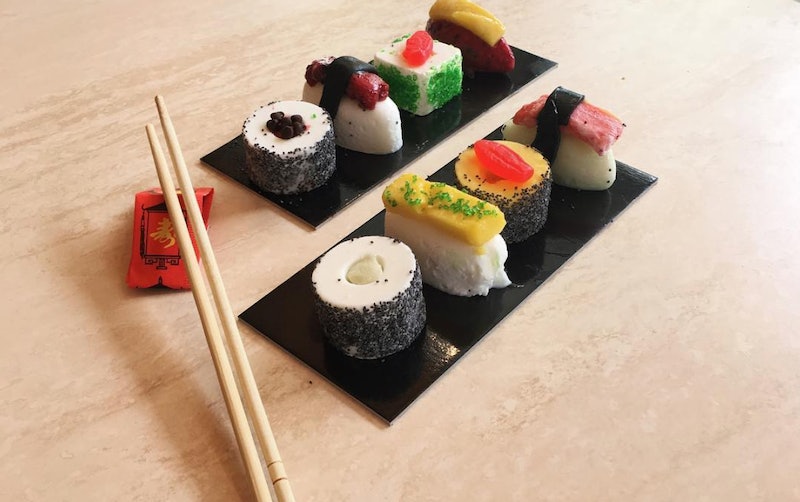 Another day, another insane food trend to #bless your Instagram news feed. If you thought raw fish and dessert didn't belong anywhere near each other, look away, because ice cream sushi is here, thanks to New York City's ice cream shop Gelarto, combining traditional Japanese cuisine and one of America's most beloved sweet treats. Gelarto offers a variety of desserts, including milkshakes, cakes, and waffles, but it's their sushi gelato that is currently turning heads.

According to Sora News 24, Gelarto relies on any of their 46-ish flavors and custom moulds to turn their ice cream into eerily accurate sushi creations. What should taste like raw fish and rice, in reality, tastes like mint, chocolate, cherry, and caramel. They even serve it to you with a pair of chopsticks, so you get the full experience. My mind is confused, because I'm expecting a spicy yellowtail roll and instead get caramel sprinkled with sea salt; but can we talk about how delicious these look? Gelarto nailed the sushi imposter — if you weren't paying attention, you wouldn't even know it's really ice cream, which could make for a rather awkward dining experience.

Gelarto has nothing but five-star reviews on Facebook, so one can only assume their sushi-inspired gelato is a tastebud success.

Gelarto isn't the first to add a sushi twist to their own creations. Perhaps the earliest food trend of 2018, as Bustle previously reported, was the crossushi, a croissant and sushi hybrid, the brainchild of Mr. Holmes Bakehouse. Intriguing? Yes. But it also crosses lines that were never meant to be crossed.

Then we had sushi burgers, and this was probably around the time I started feeling really uncomfortable.

We were granted a slight reprieve from the sushi madness with Uma Temakeria's sushi burrito, which is basically a giant sushi roll. I can get behind this. In fact, this kind of feels like what dreams are made of.

The sushi obsession is so real, we even started dyeing our hair a salmon-y pink color, because why not?

What is it about sushi that has us crushing so hard? What could possibly explain our desire to consume raw fish? Troy Johnson of San Diego Magazine has a few ideas. In his article "Why Americans Love Sushi," Johnson shares America's sushi explosion started in the '80s. In a time when we were falling deeper in love with what Johnson calls "Frankenfood," sushi satisfied a desire we maybe didn't even know we had — a desire for real food, and sushi (some types, at least) is as real as it gets. No cooking. No deep-frying. No nothing. Fish. Murder. Your plate. Presto.

A bonus for sushi lovers, assuming the raw fish you eat is responsibly sourced, clean, and pure, you're getting all kinds of health benefits when you consume it. Sushi.com says these benefits include lots of healthy omega-3 fats, which can lower the bad cholesterol in your body and also support heart health; an abundance of protein, a macronutrient your body needs to function properly; and lots of vitamins and minerals, like vitamin D and calcium.

These are probably not so much present in ice cream sushi, but happiness is, and that counts, too.

If you want to enjoy the magic of sushi but you're not quite ready to make the leap to raw fish quite yet, Gelarto's ice cream-sushi hybrid is probably a good place to start. Grab yourself a pair of chopsticks and some soy sauce (read: chocolate sauce) for dipping, and roll up your sleeves. This is one food trend that likely isn't leaving anytime soon.