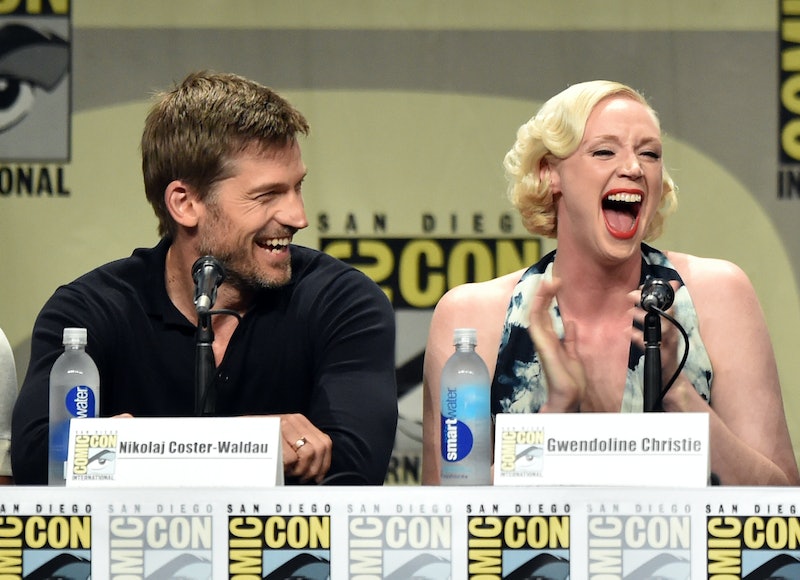 In a new video for Architectural Digest, Nikolaj Coster-Waldau revealed he has a Brienne doll that someone gave to him to give to Gwendoline Christie. The video tour of his home was released on Tuesday, Oct. 1 and showed the actor (who played Jaime Lannister on Game of Thrones) picking up a stuffed toy seated on an armchair in the corner of his living room. He introduces the audience to his Brienne of Tarth doll. “It was made by a fan. I’m supposed to give this to Gwendoline Christie,” he says as he places the doll on the floor. Coster-Waldau made a point to highlight the Brienne doll in his home tour. It does not make up for what Jaime did to Brienne in the fourth episode of the final season for Braime shippers, but it is still something good.

Coster-Waldau keeping that doll out on display in his living room is significant due to the history of Brienne and Jaime on the show. The characters first met in Season 2 when Lady Catelyn Stark asked Brienne to take Jaime to King’s Landing and bring home Sansa and Arya. An unlikely friendship formed between Brienne and Jaime during their journey, and eventually, that friendship blossomed into something more. They saved each other’s lives on more than one occasion, opened up to each other emotionally, and seemingly became an unstoppable duo. Many Game of Thrones fans rooted for "Braime" to fall in love and be together forever, and it almost happened.

In the final season, their relationship reached its peak when Jaime knighted Brienne. The day after the army of the living defeated the Night King and his army of the dead, their relationship hit a shocking low. After Jaime and Brienne slept together for the first time, Jaime attempted to sneak off without any warning so he could go back to his twin sister, Cersei Lannister.

Back in May, Coster-Waldau talked to HBO Making Game of Thrones about Jaime's choice to leave Brienne for Cersei (and he eventually died by his sister's side). "In a different world, Jaime would’ve stayed with Brienne," he said, adding that Brienne and Jaime's relationship was "a very pure, innocent love." As much as viewers wanted to see them wind up together, there is rarely a "happily ever after" in the Game of Thrones universe. "You have this idea of what you want these characters to do — it’s supposed to end well for these two, they’ve been through so much together — but that’s not how it goes," he explained.

After the series finale, he told Entertainment Weekly that "it would have been wonderful if [Jaime] could have made it. And him and Brienne could have had a life together. There’s no question about it." However, it seemed that ending was not in the cards for Jaime. Coster-Waldau said in the aforementioned EW interview, "As an audience you want him to succeed in taking that different route. You wonder if he’s changed and if he’s escaped this destructive relationship. But you realize he’s so bound by this code of honor of family first, and him and Cersei have a strong bond on every level him."

In reality, Coster-Waldau and Christie praise each other's work, get along, and are down to joke around in an Entertainment Tonight interview about a nonexistent GoT storyline where Jaime lays a dragon egg. They seem to be such good friends that, as Christie told Entertainment Weekly in May, when they found out about their characters' sex scene, he texted laughter and she sent the "being sick emoji" back." As Christie deadpanned in an interview they did with Access back in April, "We've annoyed everyone on set, and they don't want to be around it."

Suffice to say, seeing Coster-Waldau with a Brienne of Tarth doll is fun. May they stay out of any and all bear pits.