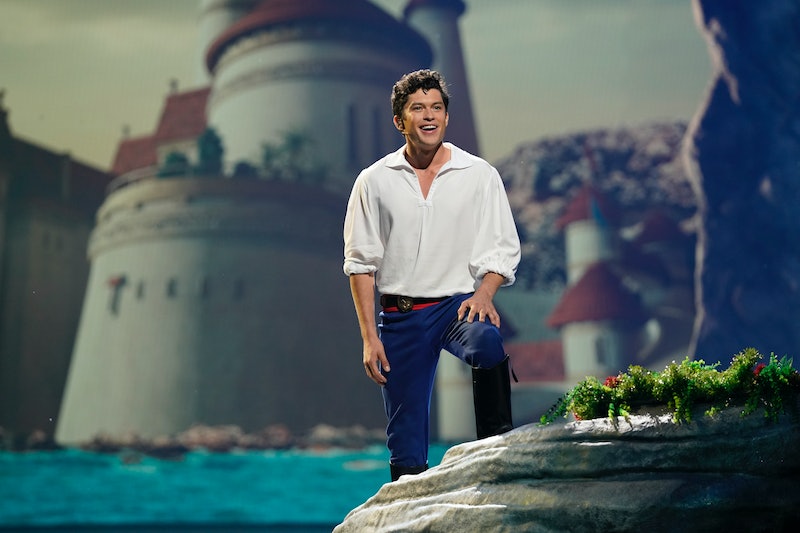 After getting his sea legs as Prince Eric during The Little Mermaid Live! it seems like this Riverdale star is ready to make the leap to the big screen. During an interview with Entertainment Tonight ahead of ABC's live musical, Graham Phillips said he wants to play Prince Eric in the live-action The Little Mermaid movie. The actor — whose first breakthrough role was in the Broadway musical 13 alongside Ariana Grande — played Prince Eric for the live musical event on Nov. 5, and was hoping that his performance would win over the film's producers as well as Ariel.

"I'm sort of seeing this as my audition for the movie role," Phillips said with a laugh. "So, we'll see how this goes." According to ET, the actor also pretended to zip his lips when asked if he has been in talks for the role. Despite throwing his hat into the ring to play the highly-coveted role, Phillips noted that he wasn't "too nervous," thanks to his theater background. "I started out my career doing opera, Broadway and stuff, so it feels kinda like a homecoming," he said.

His one big concern: "The thing I'm most nervous about is his hair," Phillips admitted. "I mean, it's tough 'cause he's royalty, so he's got to have the coif. But he's also a sailor, he's the nautical prince, so it's a really tough balance to make." Based on the reaction to his performance on social media, it seems that both Phillips and his hair managed to make viewers everywhere swoon for his Prince Eric.

Before Phillips won over fans on The Little Mermaid Live!, several big names in Hollywood were reportedly in talks to bring Ariel's love interest to life. In July, Variety and the Hollywood Reporter named Harry Styles as the frontrunner for the role, though about a month later, the former outlet reported that the former One Direction star had passed. "I want to put music out and focus on that for a while," Styles told The Face in September about his decision to turn down the role of Prince Eric.

That same month, Deadline reported that Krypton star Cameron Cuffe and Jonah Hauer-King were in talks for the role; 13 Reasons Why star Christian Navarro revealed on Twitter that he had also auditioned to play Prince Eric.

Whoever ends up playing Prince Eric will join a star-studded cast of the live-action Little Mermaid, including Grown-ish star and Grammy nominee Halle Bailey as Ariel. And she will reportedly be joined by Melissa McCarthy as Ursula the Sea Witch, Awkwafina as Scuttle, Jacob Tremblay as Flounder, and Hamilton and Blindspotting star Daveed Diggs as Sebastian the crab — though these castings have yet to be confirmed.

The live-action Little Mermaid, which is set to begin production in 2020, will also feature new music from Lin-Manuel Miranda and Alan Menken. Hopefully, Disney fans won't have to wait until then to find out who will bring one of the franchise's most beloved princes to life.

More like this
The 'Scream 6' Trailer Shows Off Hayden Panettiere's Return & Ghostface In NYC
By Jack Irvin and Jake Viswanath
Anne Hathaway Shared A "Thrilling" 'Princess Diaries 3' Update
By Darshita Goyal
Netflix Shut Down 'Bridgerton' S3 Rumours About A “Very Dark” Storyline
By Bustle
'The Queen’s Gambit' Season 2 Tweet Wasn’t From Anya Taylor-Joy
By Mary Kate McGrath, Jack Irvin and Grace Wehniainen
Get Even More From Bustle — Sign Up For The Newsletter
From hair trends to relationship advice, our daily newsletter has everything you need to sound like a person who’s on TikTok, even if you aren’t.