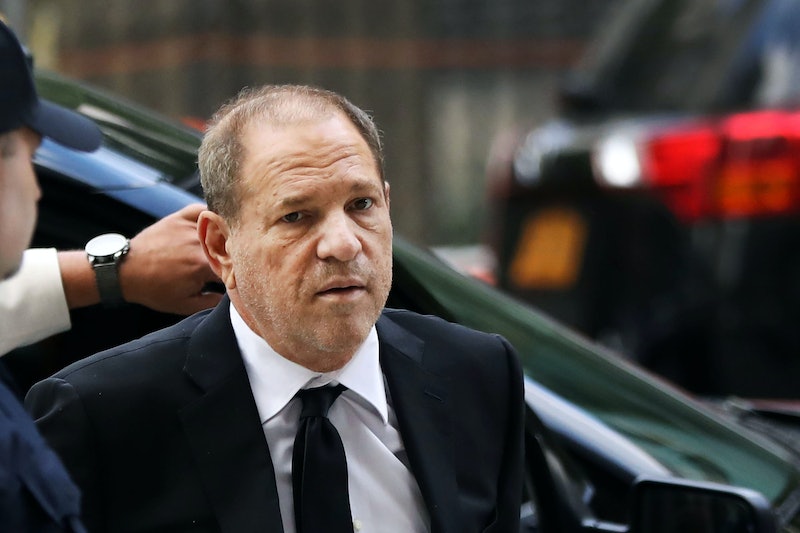 About two years after allegations of sexual misconduct surfaced, Harvey Weinstein reached a $25 million settlement deal with dozens of his alleged victims, according to a New York Times report published on Wednesday, Dec. 11. The deal "would not require the Hollywood producer to admit wrongdoing or pay anything to his accusers himself," per the newspaper, which cited several lawyers involved in the negotiations as sources.

Bustle has reached out to Weinstein's lawyer, but did not receive an immediate response. The Times noted that the reported settlement "has gotten preliminary approval from the major parties involved," adding that the deal would bring to an end to "nearly every such lawsuit against him," as well as his now-bankrupt Weinstein Company. The payment to the media mogul's accusers would be part of an overall $47 million settlement that's supposed to close out his production company's obligations, per The Times. More than $12 million of the total settlement has been allotted to cover some of Weinstein's legal costs, a lawyer reportedly told The Times on the condition of anonymity.

Weinstein's accusers include actors like Gwyneth Paltrow, Angelina Jolie, and Salma Hayek, but none of the women have joined the proceedings, per The Times' report. Ashley Judd's defamation and sexual assault lawsuit against Weinstein would not be part of the $25 million deal.

In 2017, reports from both The New York Times and The New Yorker detailed allegations of sexual misconduct against Weinstein. Following the release of those reports, approximately 80 women have accused Weinstein of sexual misconduct in the wake of the #MeToo movement. New York City police arrested Weinstein in May 2018 on charges of "Rape, Criminal Sex Act, Sex Abuse and Sexual Misconduct for incidents involving two separate women," per a statement to Bustle from the NYPD at the time. As his attorney Ben Brafman told Bustle in a separate May 2018 statement, Weinstein has "always maintained that he has never engaged in non-consensual sexual behavior."

Weinstein was released on bail in a package he reportedly negotiated in advance, under which he would pay $1 million in cash, in addition to being required to wear a monitoring device and surrender his passport, per The Times. On June 5, 2018, Weinstein pleaded not guilty to felony charges of rape and a criminal sex act. His trial is scheduled to begin on Jan. 6.

The film producer returned to a Manhattan court on Wednesday, Dec. 11 for a hearing about his bail conditions, according to CNN. During the proceedings, Judge James Burke reportedly offered Weinstein three options for bail: $5 million cash bail, a $50 million security bond, or a $2 million insurance company bond. Outside court, Weinstein's attorney Donna Rotunno said he would take the $2 million insurance company bond option, which the outlet reported "would be secured with his original $1 million cash bail plus additional assets."

More like this
Austin Butler Recalls Lisa Marie Presley Showing Him Elvis’ Bedroom
By Jake Viswanath
Pamela Anderson’s Dating & Marriage History Could Be Its Own TV Series
By Jake Viswanath
Jennifer Coolidge Hunted For Jewels & Lashes In J.Lo’s Hotel Room
By Jake Viswanath
Keke Palmer Shares The Sex Of Her & Darius Jackson's Baby
By Jake Viswanath
Get Even More From Bustle — Sign Up For The Newsletter
From hair trends to relationship advice, our daily newsletter has everything you need to sound like a person who’s on TikTok, even if you aren’t.