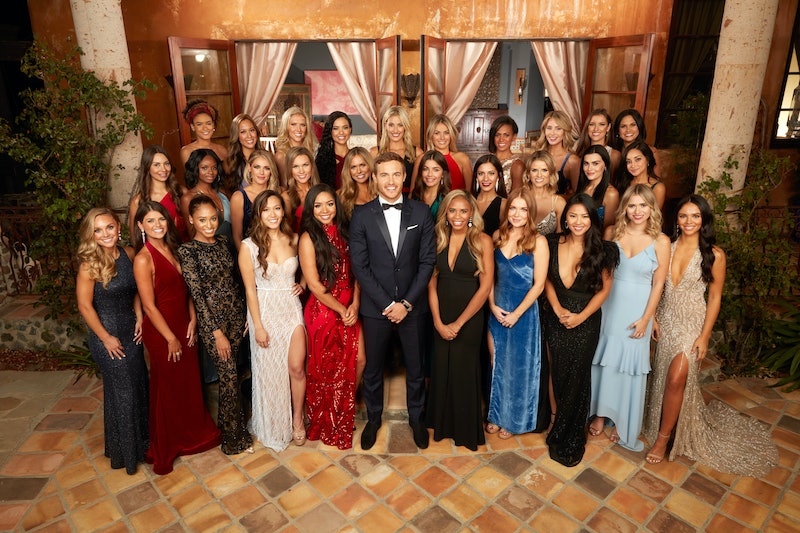 Forget Christmas. For reality TV show fans, the return of The Bachelor is the most wonderful time of the year. This season focuses on Peter Weber, a pilot from Westlake Village, California, who will meet 30 women during the Jan. 6 premiere. If you're into Bachelor fashion, the Bachelor contestants' gowns from night one won't disappoint. After all, when meeting the man who could be your future husband, your outfit has to be on point.

Like previous premieres of the show, each woman will greet Weber outside of the iconic Bachelor mansion and introduce herself in a way that will, hopefully, catch his attention. While there are likely to be a multitude of secondhand embarrassment inducing introductions (there's already a windmill reference), each woman seems to have one thing in common — other than an attraction to Weber. All 30 contestants showed up rocking seriously impressive gowns.

If you're into The Bachelor because you truly want Weber to find love, can't get enough of Bachelor Nation's hilarious Monday night tweets, or, like many of us Bachelor watchers, can't get enough of the drama, here's a chance to catch all 30 women's fashion early so you can dedicate your evening watch to drafting the perfect Bachelor bracket.

Here's every Bachelor contestants' gown from night one.

Alayah is a 24-year-old orthodontist assistant according to her bio, and for her opening night ensemble, she chose an ultra-glam gown with a plunging neckline and what appears to be a duo-chrome reflect.

For her first night, cattle rancher Avonlea chose an all white (we see what you did there), fitted gown with a dramatic one shoulder design and angel wing sleeve.

Perhaps Courtney was clued in on the fact that The Bachelor would begin airing in 2020. Her glittering gown gives serious roaring '20s vibes.

Someone had to make a reference to Weber's famous tryst in a windmill during Hannah Brown's season. That person was Deandra.

For her introductory look, The Bachelor's Eunice chose the unique accessory of angel wings, but her mauve-toned, flowing gown is classic and Grecian-inspired.

Hannah Ann's shiny navy gown appears to be relatively simple, but based on these photos, it certainly looks like there may be some added details in the back.

Jade's column gown with sparkling silver sequin details is kind of killer. The mix of the simple silhouette and intricate beading definitely makes it a winner.

Jasmine, a 25 year old client relations manager, may win the fashion game for the first night of The Bachelor. With her combination of feather-detailed sleeves, sequins, and a thigh high slit, her gown is stunning.

It's difficult to focus on Jenna's gown given that, you know, there's a cow at her introduction (potentially because according to her bio, Jenna is from the Midwest). However, the halter style, red lace gown is pretty even when you're distracted by livestock.

Kiarra's classic black gown may seem minimalist, but she may not be. According to promotional images, Kiarra placed herself into a piece of luggage and popped out of it for Weber. Get it? Because he's a pilot.

28-year-old pro sports dancer Katrina was another woman who chose to wear black for the evening, but unlike some of the more simple designs, her gown features detailed beading along the waist and what seems to be an open back.

Kelley, a 27-year-old attorney, chose to go romantic with her look for the first night. The a-line gown with a single shoulder design basically makes her look like a rose, which, for The Bachelor, is fitting.

There is certainly a trend developing among the women, and it's black evening gowns. Kelsey was another member of the group who chose a sleek, black gown with a split.

Kylie's black tulle dress with sheer panels is a different take on the trend of dark gowns seen on the first night, but the other big difference between she and the other women? She brought condoms for Weber during her introduction.

Lauren's sheer lace gown was a total show stopper for night one and one of the more daring looks of the entire evening. Plus, her choice to wear a ponytail also set her apart (in the best way).

For her night one look, Lexi threw it back with her velvet gown and platforms in a mix of '90s meets '70s style that definitely works for the contestant.

Like Jenna showing up with a cow, it's difficult to focus on Madison's dress since she's wearing a paper airplane. However, you can file her into the column of women who also went with rose red for night one.

For her night one look, Maurissa, a patient care coordinator from Atlanta, chose a deeper tone than the others with a burgundy cut-out gown and golden platforms.

26-year-old flight attendant, Megan, was the only woman who opted for a short dress for the evening, but based on photos, her black dress and red belted look could be her uniform. She's even wearing her wings pinned to her dress.

While beading and dark romantic colors like red and black were popular during the first night of The Bachelor, Mykenna opted for something more airy with this lavender-gray ruffled gown.

Like Mykenna, Natasha's gown made her a standout in a sea of red and black. Her metallic silver dress was one of the only cool-toned designs of the night.

If you're going to be at a cocktail party until the wee morning hours, you'll likely want to wear a dress like Payton's. Her flowing, halter style red gown with a cutout at the bodice was classic and stylish but looked comfortable, too.

Sarah's gown for night one of The Bachelor is a classic for the show: beaded from head-to-toe, full-length, and fitted.

Savannah, a realtor from Houston, Texas, was another woman who opted to potentially send Weber a subliminal rosy message. Her red column gown with a split and thin straps screams, "Give me a rose!"

Shiann's golden and glittering brocade gown was one of the most glamorous looks of the night (and a bit reminiscent of Courtney's dress).

Alabama-based Sydney opted for a subtle take on the naked dress. Her halter style gown played with sheer fabric beneath glittering beads.

Tammy, a house flipper from New York, gets a gold star for being able to walk in those ultra-tall heels. As for her dress, she and Avonlea, are the only two women who opted to go for white on night one.

The Bachelor's Victoria F may appear to be wearing a black gown at first glance, but this contestant actually switched up the color palette from the other women wearing a deep emerald dress with head to toe beading instead of going for black.

Like Victoria F., Victoria P. also switched up the color scheme of the night. While her gown is quite dark, it's actually an eggplant hue in velvet with a strappy, cut-out back.

While fans will have to wait to discover if Weber will find love on this season of The Bachelor, at least fashion-loving fans of the series know that these ladies will bring some great style to the season.