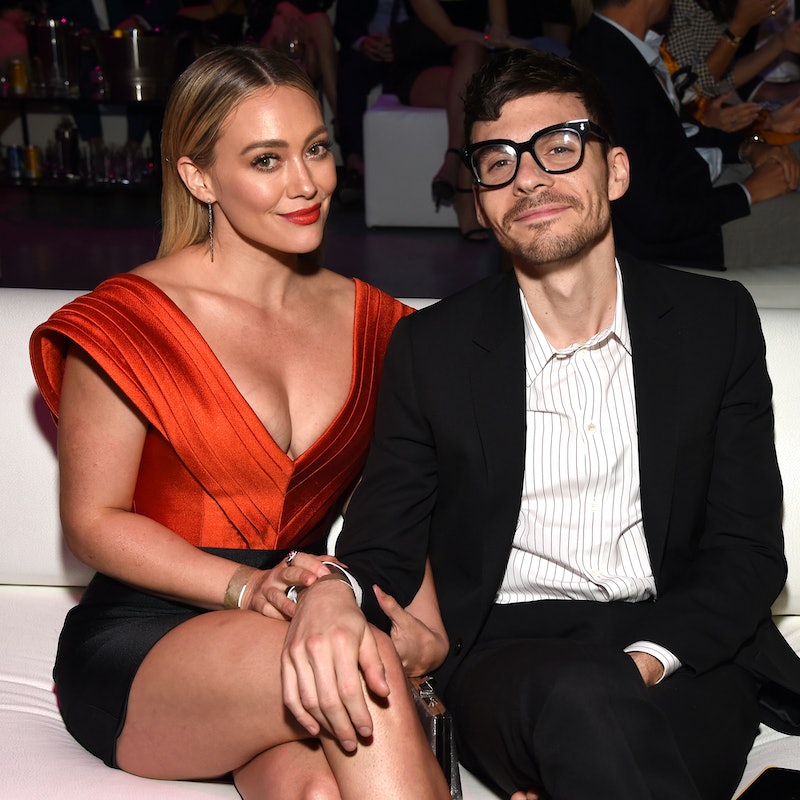 Hilary Duff is definitely having an extra happy holiday this year. The actor married partner Matthew Koma the weekend before Christmas after getting engaged back in May. Like her diamond engagement ring, Hilary Duff's wedding dress was a showstopper.

On Dec. 22, Duff took to her Instagram account to announce she and Koma's marriage. In her photo, Duff and Koma stand behind a vintage car that has been decorated with a garland of antique roses and greenery. "Just Married" is written across the window, and of course, cans are tied to the bumper. Duff simply captioned her photo, "This." Koma who posted the same image wrote, "for the rest of forever... 12.21.19."

While her now husband looks dapper, it's hard to notice anything other than Duff's chic wedding gown. According to a press release from the label, the dress is custom Jenny Packham. The frock features 100 buttons running down the back and onto a small train, an angel sleeved cape design, exaggerated sleeves, and cut-out in the back. The dress also featured sweet embroidery on the inside with Duff and Koma's initials as well as those of their daughter Banks and Duff's son Luca.

Duff wore little jewelry with the structural, minimalist gown excepting a pair of straight drop earrings. Her newly cut bob was styled by Duff's longtime hairstylist Nikki Lee in textured waves and held back sleekly with a a pearl and gold headpiece.

Prior to her wedding day, Duff sat down with Vogue to explain her look for her nuptials. The star of the upcoming Lizzie McGuire reboot explains in a video uploaded to the magazine's YouTube channel that she and her stylist, Jessica Paster, sat down and looked at several designers before ultimately deciding on Packham.

Of the dress, Duff says that while she feels comfortable, the design is also everything she wanted for her wedding day specifically pointing out the exaggerated shoulders. Duff explains that she wanted a gown that wasn't big but would still make a statement, and she got it in her Jenny Packham dress.

According to Instagram, though, Duff didn't just have a single wedding look. The bride appears to have changed into a new ensemble for her reception. In slides posted to her stories, Duff and her now husband appear to be in a photo booth, and she's wearing a party perfect gold sequin co-ord set. The cropped top features a scoop neck while the bottom appears to be a pair of high-waisted, wide-leg trousers. Her hair has been swept back into a ponytail, and she's added a pair of gold hoops to her look.

2019 saw Duff hoping on board the Lizzie McGuire reboot, celebrating her daughter's first birthday, and getting engaged. Now, she'll be finishing out the year as a very chic married woman.