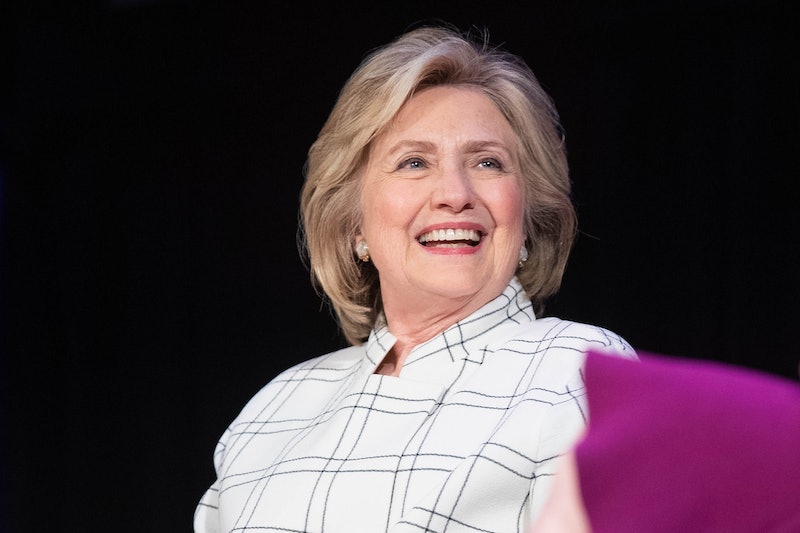 Let it be known that Hillary Clinton is still with her — and by "her," we mean Meghan, Duchess of Sussex. During a recent interview with BBC Radio 5, Hillary Clinton said that Meghan Markle deserves "a lot better" than the way she has been treated by the media in the wake of her engagement to Prince Harry. The former presidential candidate was promoting her book co-written with daughter Chelsea Clinton when she deviated a bit to discuss Meghan.

Clinton admitted that seeing the "heartbreaking" treatment Meghan has received by the British press brings out her motherly instinct. "I have a great deal of feeling toward and about [her]," Clinton said, noting that nothing can really prepare you for the realities of being thrust into an international spotlight. Describing Meghan as an "amazing woman," Clinton said, "She has made her own way in the world, then she falls in love, and he falls in love with her, and everybody should be celebrating that because it is a true love story."

And, while both Clinton and Chelsea can relate to being vilified by the media, they agreed that Meghan's race has "absolutely" played a major role in the harsh reception that she's received from the press over the years. "If you go back and look at social media from the time that the engagement was announced, race was clearly an element in it," Clinton said. "And to think that some of your ... mainstream media would allow that to be printed in some of your pages, or amplified, is heartbreaking and wrong."

Her advice to Meghan: "I [just] want to hug her!" Clinton said, adding, "I want to tell her to hang in there, don’t let those bad guys get you down. Keep going, do what you think is right." Ultimately, however, Clinton said that Meghan "deserves a lot better," and that what she and Prince Harry, Duke of Sussex, have been through is incredibly "tough."

The Duchess of Sussex herself recently broke her silence on the impact that the negative press has had on her and her family in Harry & Meghan: An African Journey. In the documentary, which aired on ITV on Oct. 20 and chronicled their African tour, Meghan addressed the intense and harsh scrutiny she received during her pregnancy with son Archie. "It's a lot," she said, in part. "So, you add this on top of just trying to be a new mom or trying to be a newlywed… It’s a very real thing to be going through behind the scenes."

In early October, the Duke and Duchess of Sussex announced a lawsuit against British tabloid The Mail on Sunday and its parent company, Associated Newspapers, for invasion of privacy. In a statement released on their official website, Harry called out the papers for their "relentless propaganda" and publishing "false and malicious" reports during the duration of the relationship, but especially during Meghan's pregnancy. "There comes a point when the only thing to do is to stand up to this behavior, because it destroys people and destroys lives," Harry wrote. "Put simply, it is bullying, which scares and silences people."

Clearly, Meghan has plenty of people on her side — and on both sides of the pond — as she and Harry attempt to finally put a stop to the vicious attacks she's endured from the press.

More like this
Prince Harry Incorrectly Recites Christina Aguilera’s “Genie In A Bottle” Lyrics
By Jake Viswanath
Eurovision Has Been Given A Whole New Look Ahead Of Its Liverpool Debut
By Bustle UK
The Meaning Of Steve Lacy’s “Bad Habit” Lyrics
By Radhika Menon
9 Photos Of Celebrity Couples & Unexpected Duos At The 2023 Grammys
By Jake Viswanath
Get Even More From Bustle — Sign Up For The Newsletter
From hair trends to relationship advice, our daily newsletter has everything you need to sound like a person who’s on TikTok, even if you aren’t.