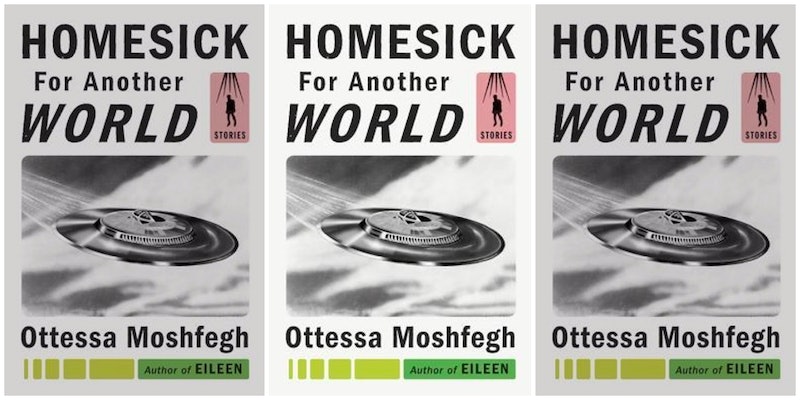 There are some books that are so good, you just want to curl up in them and never leave. Then there are others, like Ottessa Moshfegh's newest story collection, that make you squirm in your seat as you read them, the kinds of stories that make you want to close them after a few pages, but that are simultaneously impossible to put down. That is exactly what makes Homesick for Another World an uncomfortable read you have to experience for yourself. Like a gory movie you can't tear your eyes away from, this powerful collection is worth every bit of unease its stories, and more specifically its characters, cause you.

In this highly anticipated short story collection from the author of the PEN/Hemingway Award-winning and Man Booker Prize short-listed Eileen, rising literary star Ottessa Moshfegh takes readers on an unsettling journey to the most bizarre corners of society, the places where freaks, weirdos, and losers thrive. Strange and unusual and even a bit sinister at times, the stories in Homesick for Another World all explore similar themes and even carry throughout them the same darkly comedic tone, but as usual, each unique narrative showcases the author's extraordinary range and effortless command of the written word.

Whether she is writing about a teacher with substance abuse problems, a young couple on the fringe of society, or a homicidal young girl, Moshfegh's bold, daring prose and master storytelling takes readers beneath humanity's superficial surface and into the darkest parts of its soul. Though bizarre and almost wholly unlikable, Moshfegh's characters are undeniably authentic, right down to their nervous ticks, deadly vices, and physical flaws.

In "Mr. Wu," the titular character uses insulting texts as a way to win over the woman of his dreams, by making her so insecure she runs into his arms. In "The Weirdos," an unhappy girlfriend finds herself fantasizing about the death of either her or her boyfriend, which to her was a much more tantalizing exist strategy that just simply ending the relationship. In "The Surrogate," a young woman who is hired to play the part of a vice president of a company, is quick to inform readers about the demons that live inside of her body, the mostly likely cause of the abnormal size of her genitals. And in that same story, a interaction between the narrator and a young man she takes in for the night proves that in Moshfegh's world, everyone is just as depraved as her leading characters.

"In the cab, he talked like this: 'You know how many murdered bodies never get discovered? You know how to tell if a person's soul has left its body? You know that guy back there outside the liquor store? I think he's possessed or something.'

'Many people often are.'"

Contrary to your literary expectations, Moshfegh's characters don't go through any dramatic transformations or make any life-altering changes as their stories progress, either. Their dreams are never realized; their destinies never altered. Instead, each of their stories shows a character who finds a way to make life more tolerable, if only for a moment. "Life can be strange sometimes," the narrator of "The Surrogate" explains, "and knowing it can be doesn't make it any less so. I know I don't have any real wisdom. I don't have any wonderful ideas. I am lucky to have found a few nice people here and there."

For each character in Homesick for Another World, and for each reader who sticks with them, the world is a dark and weary one, full of hate, disgust, contempt, and plain old fashioned boredom. Careers are unfulfilling, families are disappointing (and to some, like the brother and sister in "A Better Place," completely alien), and love is nothing more than settling for something less disappointing than loneliness. As the narrator of "The Weirdos" confesses at the end of her own unhappy love story:

"Eventually he'd knock on the door with huge scabs all over his arms and face, body thrumming with methamphetamine, head bent like a naughty child's asking to be forgiven. He always hid his shame and self-loathing under and expression of shame and self-loathing, swinging his fist back and forth, Shucks, always acting even then. I don't think he ever experienced real joy or humor. Deep down he probably thought I was crazy not to love him. And maybe I was. Maybe he was the man of my dreams."

Even Moshfegh's settings are strange and disturbed characters in their own rite, creeping in and invading the reader's pristine vision of the world around them. In "The Weirdos," the narrator and her sorry excuse for a boyfriend live in an apartment in a part of town where even the tropical palm trees are, like the characters who observed them, sickly and damaged.

"They were infested with a parasite that made them soft like bendy straws, and so they arched over the roads, buckling under the weight of their own heads, fronds skimming the concrete surfaces of buildings, poking in through open windows. And when the wind blew, they clattered and sagged and you could hear them creaking."

From the scabs and acne marks of her characters to the cracks and bruises of her settings, every bit of Moshfegh's fictional world is haunting and filled with a palatable despair.

So, why crack open the book at all, let alone read through all 304 pages of disturbing discomfort? Because reading about Moshfegh's fictional world is like looking in a funhouse mirror, only to realize that the distorted reflection you see isn't that much different from reality.

Sharp and daring and relevant as ever, Moshfegh's collection of freaks and losers speaks to the current condition of our culture, the state of our politics, and the overwhelming unease we as a nation are collectively feeling post-election. With wit and humor and unapologetic realism, Moshfegh puts into fiction what we are all struggling to deal with in real life: that dire need to change our lives in a drastic and meaningful way, and the more dire need to be just a little more comfortable right now, if only for a moment.

"There were protesters in Egypt getting killed. There were scientists discovering new planets.There were fires in a national park, a flood in India, a spree of robberies across the river. Poor people and immigrants liked the president. A storm was coming, high winds, they warned. Keep your Pets safe inside. 'Whatever,' the girl muttered, and turned the dial to jazz."

Homesick for Another World by Ottessa Moshfegh, $19.07, Amazon