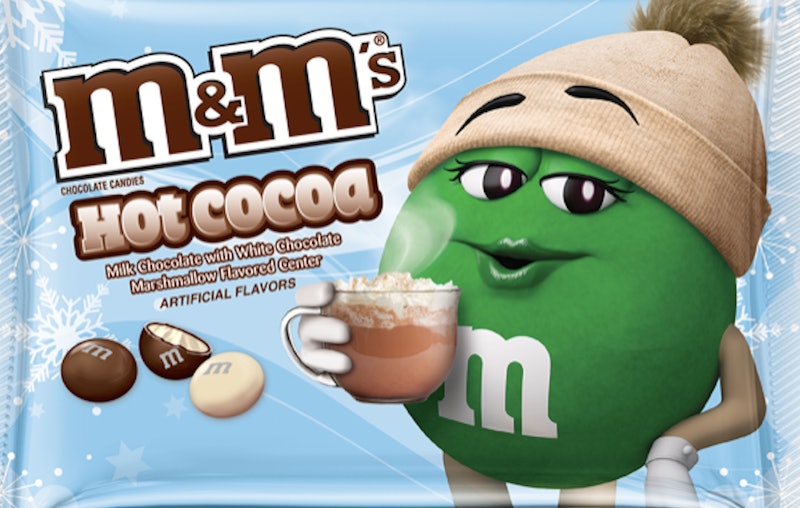 As much as it pains me to say it, Halloween season is almost over — but at least this little tidbit of information should make it a tiny bit easier to roll into winter once we blow out our jack o’lanterns: Hot Cocoa M&Ms are returning for 2019, Best Products reports. What’s more, they'll be arriving as a Target exclusive soon: A rep confirmed to Best Products at Target's holiday press preview event this week that they’ll be hitting shelves on Oct. 27. That's right — it's not just a rumor. It's a done deal. Heck, and yes.

Hot Cocoa M&Ms made their first appearance during the 2018 winter season, arriving at Target in late October so as to be well positioned for the cold weather holidays as soon as Halloween breathed its last. With a light blue bag adorned with Ms. Green (who, fun fact, is voiced by Cree Summer, who also counts among her many, many iconic roles Susie Carmichael in Rugrats) clad in a cozy-looking knit cap and holding a cup of actual cocoa, the flavor was an instant hit as much for its appearance as its flavor.

Talk about dialing it up to 11.

M&Ms are obviously no stranger to limited edition seasonal flavors; in recent years, we’ve seen everything from White Chocolate Cheesecake (for Valentine’s Day, of course) to Pecan Pie (a fall favorite) varieties hit shelves in honor of specific occasions. Lately, though, the candy seems to returning to form with seasonal variations focused on what the brand does best: Chocolate. Just recently, for example, we were introduced to Creepy Cocoa Crisp M&Ms; this year's Halloween flavor, they featured a crispy cocoa cereal center wrapped in chocolate and finished off with a candy shell. featuring a crispy cocoa cereal center wrapped in chocolate and a candy shell. Meanwhile, other new flavors to hit the scene in recent memory include Hazelnut Spread and Fudge Brownie. Does that mean we’ve seen the last of such… uh… fascinating flavor options as Carrot Cake, which reared its bizarre little head during the Easter season in 2013? Not necessarily — but for now, let’s just take the opportunity to revel in all the chocolatey goodness that’s readily available.

The rep who confirmed the return of Hot Cocoa M&Ms to Best Products did also note that there won’t be a new winter holiday M&Ms flavor this year; however, I’d argue that the presence of Hot Cocoa M&Ms in our midst once again is present enough. Look for them at Target stores and online starting on Oct. 27.

More like this
Learning To Love, Not Judge, The Lunchbox Wives Of TikTok
By Esther Zuckerman
Ashamed Of Your Screen Time Stats? Here's How To Change That
By Alexis Morillo
I Spent 2 Years Trying TikTok’s Dating Advice
By Kailynn Johnson
23 Super Sweet Things To Write In A Valentine's Day Card
By Karen Belz and Lexi Inks
Get Even More From Bustle — Sign Up For The Newsletter
From hair trends to relationship advice, our daily newsletter has everything you need to sound like a person who’s on TikTok, even if you aren’t.