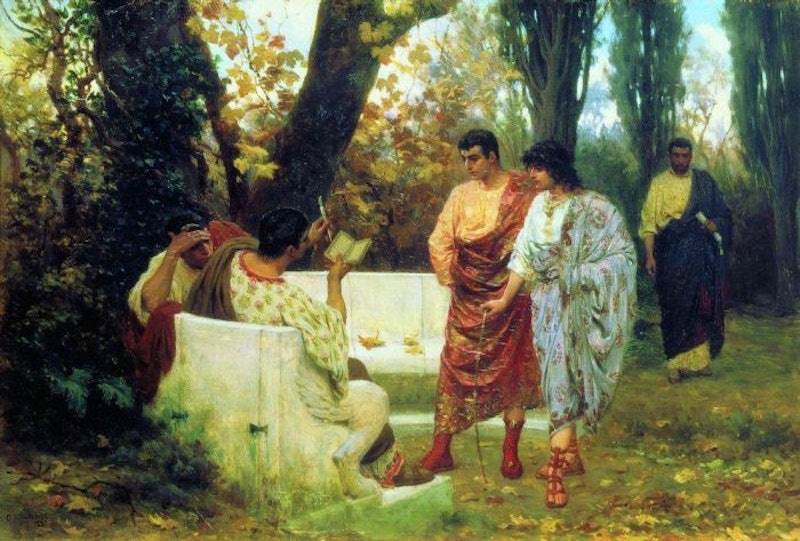 When you hear about the Classics with a capital "C," you might imagine ancient men sculpted out of white marble, or epic poems being inscribed on great scrolls of parchment. You probably think of war heroes, of gods taking the forms of various animals to harass women, or of philosophers pontificating on the nature of life itself.

You probably don't think about napkins. Or erotically charged call out poetry.

In fact, if you didn't take Latin in school, there's a good chance that you never learned about Gaius Valerius Catullus at all. Allow me to fix that right now: Catullus was a poet in Ancient Rome, somewhere between 84 and 54 BCE. He was part of the "new wave" of poetry at the time, because he wasn't into retelling myths in the epic tradition. Instead, he wrote poems about his personal life (you had better believe that if Catullus was alive today, he'd be killing the Instagram poetry game).

The poems of Catullus can be roughly grouped into four categories: poems to and about his friends, poems offering condolences for loss, poems about his wild and passionate sex life, and "invectives," which were obscene take down poems focused on dragging all of Catullus's frenemies.

We're going to focus on those last two forms, because no one writes a sexy take down like Catullus.

"Let us live, my Lesbia, and let us love,

and let us judge all the rumors of the old men

to be worth just one penny!"

"Lesbia" as a pseudonym was a not-so-subtle nod at the ancient Greek poet Sappho, from the isle of Lesbos, who wrote steamy love poems about her girlfriends (yes, this is where the word"Lesbian" comes from).

Sappho's poetry was already several centuries old by the time Catullus came around, and he was a huge fan. Like Sappho, Catullus was all about professing his love through his writing... unless he and Lesbia were on the outs, then he was all about being shady:

"Let her live and let her flourish with her adulterers,

whom having embraced 300 of them at the same time, she owns and keeps them,

truly loving none of them, but repeatedly breaking the groins of

When he wasn't mooning over Lesbia, Catullus was using his verse to hit on his other lovers, like the lovely Ipsitilla, who he had very specific instructions for:

but stay at home & get yourself all ready

Translators vary in how "delicately" to word Catullus's more "romantic" overtures. But when it comes to his invectives, it's nearly impossible to clean things up.

It seems that Catullus had beef with a number of people, mostly frenemies who insulted his writing and dudes who slept with his married girlfriend. With no formal social media platforms on which to drag people, though, Catullus was forced to go the old fashioned route. Some of his call out poems are supposedly complimentary, like this ode to "friend" Furius:

" you have an anus more pure than a saltcellar,

nor in the entire year do you defecate ten times,

if you rubbed it with your hands,

you wouldn't even be able to make your hands dirty."

So, if you count calling someone's anus a saltcellar as a compliment, then... there you go. But for the most part, Catullus is angry at the people in his poems, for doing things like stealing his personal napkin:

You do not use well: in joke and wine

You lift the napkins of the more careless.

Do you think that this is witty? It escapes you, foolish man

This thing is utterly sordid and unattractive."

The poem goes on to threaten Marrucinus with 300 more verses of poetry if he does not return the napkin immediately. Also, Catullus does some fancy Latin punning to make "Asinius" both this guy's name and the phrase "son of an ass."

Napkin thievery upset Catullus, clearly, but as far as his invectives go, that one is fairly light. Folks like Aemilius fair far, far worse:

"So may the Gods love me, I did not think it made any difference whether I smelled Aemilius' mouth or his arse. In no respect is the latter cleaner, the former filthier; as a matter of fact, his backside is cleaner and better—for it comes without teeth. His mouth has teeth a foot and a half long, gums truly like an old wagon-box, and besides, he usually has a maw like the split twat of a she-mule pissing in the summer heat."

And then of course there is Catullus's 16th poem. The poem so filthy that it was not even translated until the 20th century.

Catullus 16 is addressed to Furius, who had an affair with Catullus's boyfriend, and to Aurelius, who apparently insulted his love poetry for being "girly."

Here is the cleanest conceivable translation of the first few lines:

"Up your ass and in your mouth

Aurelius, you too, Furius, you cocksuckers,

calling me dirt because my poems

have naughty naughty words in them.

Just the poet's got to be a boy scout

fellas, not his goddamn poems."

So the next time you're inclined to think of the Classics as hallowed and grand, or the next time your aunt takes to Facebook to decry the loss of decency among the young people of today, just... remember that Catullus was writing nasty call out posts long before any of us were born. May his spirit live on only in the most well-deserved of savage subtweets.

More like this
Meghan Trainor & Daryl Sabara Are Expecting Their Second Baby
By Jake Viswanath
18 Hinge Prompt Answers To Try If You’re Looking For Something Casual
By Lexi Inks
12 Active Date Ideas That'll Get You & Your Boo Outside
By Lexi Inks
TikTok's Voluntary Celibacy Trend Has Sparked A Movement
By Lexi Inks
Get Even More From Bustle — Sign Up For The Newsletter
From hair trends to relationship advice, our daily newsletter has everything you need to sound like a person who’s on TikTok, even if you aren’t.