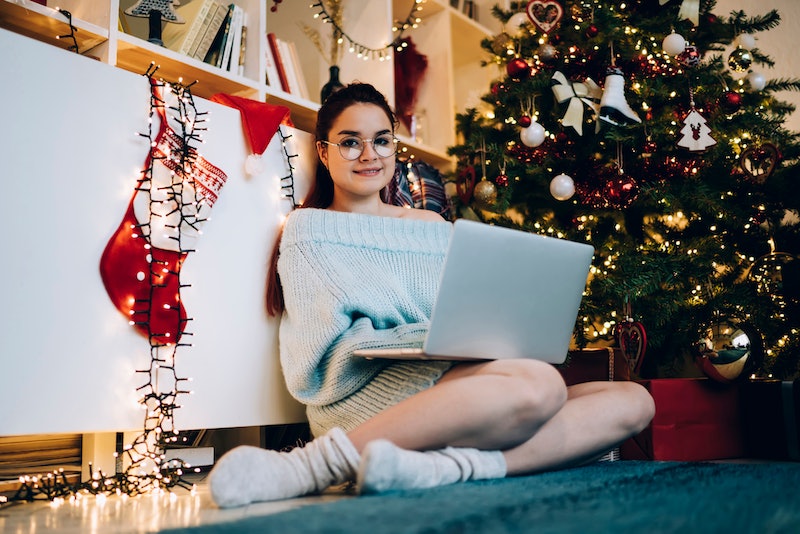 We're currently in the middle of the final Mercury retrograde period of 2019, and it's taking a blender to our lives in full force, making it difficult to do anything or get anywhere in a timely fashion. While we should be grateful that this transit isn't completely overtaking the winter holidays this year, it's certainly falling close enough to the season of gift-giving that we should be aware of how astrology will affect 2019 holiday shopping — because Mercury leaves no stone unturned when it comes to making life a little bit more difficult.

In fact, waiting until the last minute to do your holiday shopping might not be such a bad idea this year, according to astrology. Mercury — planet of communication, intellect, timing, and tech — began its most recent backspin on Oct. 31, and will retrograde on through Nov. 20, at which point it will finally go direct again. But alas, even then we won't be out of the woods, because a little thing called Mercury retrograde's post-shadow period, or Mercury retroshade, will carry on all the way through Dec. 7 — meaning we'll still be under the influence of the retrograde's spell for weeks to come.

During the shadow period, we'll still experience some of the lingering effects of the full-blown retrograde for about two weeks. This can be helpful in the sense that it eases us back into normal life, forcing us to take it slow and integrate the lessons we learned during the retrograde — but it can also be super annoying, because, well, can the retrograde just end already?! Because of Mercury's ability to mess with things like online shopping, clear communication, and comprehending the fine print, the retroshade period may not be an ideal time to buy gifts for your loved ones. (And if you insist on doing so anyway, please, save your receipts, people!)

But it's not just the retroshade. There are also other astrological factors at play that might convince you to wait until the last minute to score your holiday shopping deals. Bustle spoke with astrologer Lisa Stardust, who gave us some more information. "Jupiter enters Capricorn on December third, which is another major financial factor in holiday shopping," she shares.

Jupiter is the planet of expansion and abundance, but the sign of Capricorn, on the other hand, is ruled by planet Saturn, which is all about restriction. "This cosmic pairing is frugal with money," says Stardust — which means waiting until we're in the swing of December (and the retroshade is fully over) to do the bulk of your shopping will not only ensure a smoother experience, but may also help keep you frugal and within your budget, which is always a good thing.

TBH, when it comes to the astrology of the 2019 holiday season, the stress of shopping during crunch time this year may actually be less severe than the stress of trying to beat the stars at their own game by starting early. Here are a few major astrological reasons to do your holiday shopping last-minute.

Black Friday Deals May Not Be What They Seem

Black Friday, Small Business Saturday, and Cyber Monday all fall within the Mercury retrograde shadow this year, which means that the likelihood of price misprints, faulty charges, or unclear advertising is way more likely. "Items may not be advertised at the actual price and you may wind up purchasing the wrong gift by accident," Stardust warns. Unless there's a deal too solid to pass up, wait until the retroshade ends and your purchases are more transparent.

Because of Mercury retroshade's influence, the deals we're seeing during Thanksgiving weekend may not actually be the best the season has to offer, so don't jump the gun. "There may be better deals available after the retroshade period, which will cause shoppers remorse for many," says Stardust. Don't end up financially regretting your preemptive shopping efforts and wait until the retroshade ends to do the bulk of your bargain hunting.

Mercury rules technology, which means that during its retrogrades and subsequent retroshades, we're bound to hit all sorts of tech snags. Because of this, the ever-so-common process of ordering gifts through apps or online could easily go awry: Think credit card information getting phished, packages being lost in the mail, or online orders accidentally being processed twice (or not at all!). We're in the age of holiday shopping on Amazon Prime, y'all, so if at all possible, wait until after Dec. 7 to place your online gift orders.

Shopping On A Budget Will Get Easier

Jupiter is currently in wild, spontaneous, free-spending Sagittarius, but will move into practical and frugal-minded Capricorn in early December, making it a lot easier to make financially savvy shopping choices. "Jupiter in Capricorn will allow us to find better prices and bargain," explains Stardust. "And it will allow us to shop on budget with our holiday bonus." We've all got some money lessons to learn astrologically this season, so saving some dough is always a good thing.

Mercury's current antics are making all of us feel confused and less-than-stellar at communicating clearly, so how can we expect anyone to be clear-minded when it comes to their holiday gift requests? "Mercury retrograde and retroshade will make people change their minds a million times before deciding on the perfect present," warns Stardust. "Also, we may change our own lists too." Waiting until the retro-haze clears will allow you much more mental clarity when it comes to figuring out what needs to be on your holiday wish list, as well as coming up with the perfect gifts for everyone else in your life.

More like this
Here’s Your Astrological Forecast For February
By Nina Kahn
Your Ultimate Guide To Aquarius Season
By Brittany Beringer
Here’s Your Horoscope For Unconventional Aquarius Season
By Brittany Beringer
Your January New Moon Horoscope
By Nina Kahn
Get Even More From Bustle — Sign Up For The Newsletter
From hair trends to relationship advice, our daily newsletter has everything you need to sound like a person who’s on TikTok, even if you aren’t.