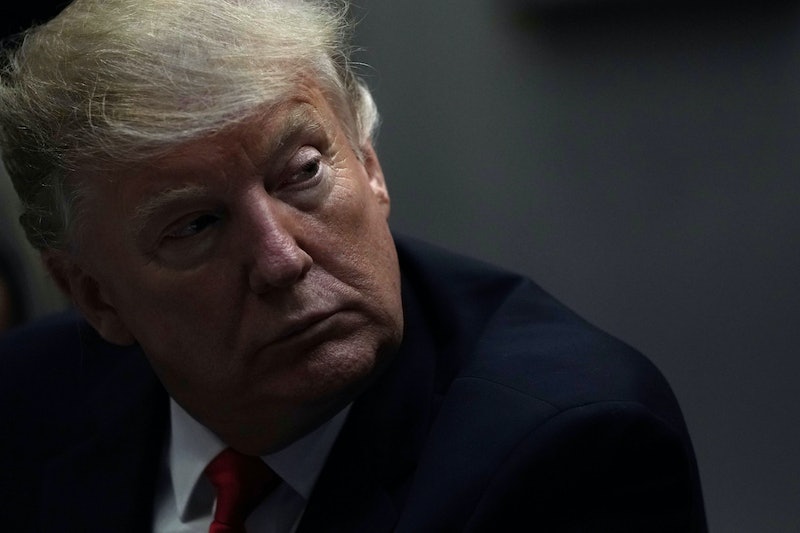 On Tuesday, Feb. 5, the president will give his annual address before a joint session of Congress. For those wondering how long Trump's 2019 State of the Union is, the simple answer is that it's hard to predict. And given how much has happened in the last few months, not the least of which included a government shutdown that led to a delay in the SOTU address, it's very possible that this one could go on for a while.

According to NBC News, there have been 95 SOTU addresses in American history up until this point. The longest address of those 95 was given by Bill Clinton in 2000, the news network reports. His speech lasted a whopping hour and 29 minutes. Clinton was known for giving SOTU speeches on the longer side; he also holds the place for second-longest SOTU speech, for the one he gave in 1995.

Per NBC, the shortest SOTU address since 1966 was given by Richard Nixon in 1972; this speech lasted less than 29 minutes.

Of course, there's no predicting how long Trump's 2019 address will be— but if his 2018 address is any indication, it's likely going to be a doozy. Per CNN, Trump's first SOTU was one hour and 20 minutes long, coming close to taking the title of longest SOTU from Clinton. CNN further notes that presidents have been taking more time than they used to with their addresses, overall: four of the past nine presidents have spoken for over an hour.

Trump has not clarified many details about what he plans to go over in the upcoming State of the Union. But that's unsurprising, given that he only recently accepted the invitation by House Speaker Nancy Pelosi to give the speech at all.

Per CNN, it was Pelosi who reached out to POTUS to confirm a rescheduling date for the SOTU, after she originally cancelled the Jan. 29 plan due to the shutdown. According to the outlet, Pelosi wrote,

When I wrote to you on January 23rd, I stated that we should work together to find a mutually agreeable date when government has reopened to schedule this year's State of the Union address. In our conversation today, we agreed on February 5th. Therefore, I invite you to deliver your State of the Union address before a Joint Session of Congress on February 5, 2019 in the House Chamber.

Per CNN, Trump replied on Monday evening in a statement that read, "It is my great honor to accept. We have a great story to tell and yet, great goals to achieve!"

Following Trump's SOTU address (no matter how long his speech takes), politician Stacey Abrams will give another speech, in the form of a televised rebuttal to POTUS' address on behalf of the Democratic party. Per BBC, it's a tradition for the opposition party to deliver a rebuttal to the president's annual address immediately after.

Following the announcement, Abrams took to Twitter to say that she was "honored" to give the rebuttal address. Abrams wrote, "At a moment when our nation needs to hear from leaders who can unite for a common purpose, I am honored to be delivering the Democratic State of the Union response."

How To Watch The 2019 SOTU Responses, Because Stacey Abrams Is In Good Company

These Photos Of Congresswomen Wearing White At The SOTU Are Incredible