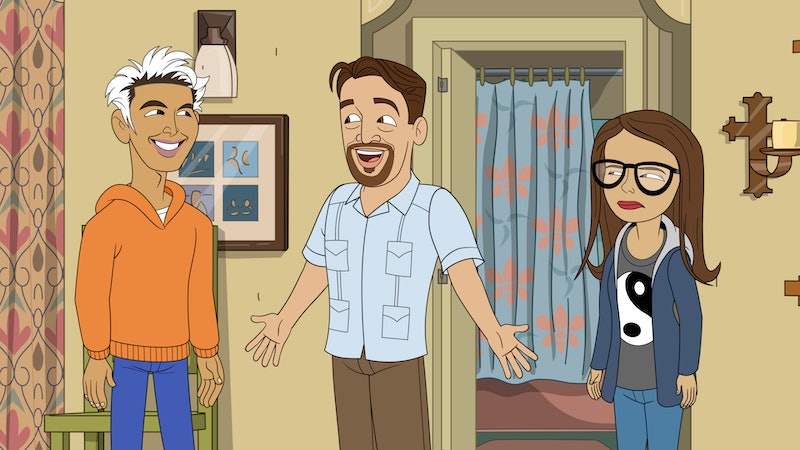 When the coronavirus pandemic shut down production of One Day At A Time, there was one unfinished episode that couldn't be delayed. So co-showrunner Gloria Calderón Kellett got creative.

“We obviously wanted it to be out there before [the] November [election],” Calderón Kellett says of "The Politics Episode," which depicts the Alvarez family having some uncomfortable yet necessary discussions about politics. So the multi-cam sitcom, which is typically shot in front of a live studio audience, was reimagined as an animated special, with series regulars like Justina Machado and Rita Moreno voicing their characters from the socially-distanced safety of their homes. With most of Hollywood on indefinite hiatus, Calderón Kellett was even able to snag some VIP guest stars.

“Gloria Estefan has her own studio, so she recorded there,” she says of the singer, who also recorded the show's theme song. And making his One Day At A Time debut is Hamilton's Lin-Manuel Miranda. “He's been so supportive of the show, but he's a very busy, popular national treasure,” Calderón Kellett says. With production of Miranda's movie musical Tick, Tick...Boom! on hold, Calderón Kellett thought it couldn’t hurt to ask. He agreed over text message, giving "The Politics Episode," airing June 16, its Tío Juanito.

The episode deals with an impending showdown between the liberal, LA-living Alvarez family and their conservative cousins from Florida — Juanito and his wife Estrellita (voiced by a returning Melissa Fumero). It’s about coexisting with family members who don’t share your political views and engaging them. It also completely abandons the season's regular storylines. “This is an unapologetic discussion of politics head-on, which is different than the day-to-day that we usually do on the show, which can seem political at times, but really is just about a Latino family dealing with day-to-day struggles," Calderón Kellett explains.

There's never a direct confrontation, though. Donald Trump’s name is never uttered, and even before the rock-ribbed Republican houseguests arrive, the Alvarezes agree to hear them out. “If we’re being generous, the things they care about are actually the same things we care about,” Elena tells her mother, even if they look at the same country and the same president and see very different realities. Politicians aren't necessarily direct representations of what voters believe, the show suggests, you just vote for the person who most nearly approximates your beliefs.

"I pick the one that gets me closer to where I want to go. That’s how I feel about this president,” Estrellita says while the Alvarez family attempts to imagine how to civilly engage with their relatives. The episode isn’t a lesson on how to change minds, but a challenge to stop avoiding discussing thorny topics.

For co-showrunner Mike Royce, making the episode brought a lot of clarity. The writer’s room was essentially a petri dish for the debate that would transpire on the show. “How do you reconcile loving people who think so differently?” is the question that drove conversation. “Especially, it was interesting to hear the queer writers in the room talk about when their families are voting against their civil rights as LGBTQ+ people, the right to get married,” remembers Calderón Kellett. Blocking out everyone who doesn’t agree with us may be important for our mental health sometimes, she says, but that stymies conversation.

Where her thinking ended up after eight months of drafting, revising, and producing the episode echoes the precarious if optimistic note the Alvarez family takes into the big visit. "It's tricky. We're trying to come up with some solutions, and by all means, we don't have them," she says. "But that is the goal: trying to find ways to build bridges."

More like this
Eurovision Has Been Given A Whole New Look Ahead Of Its Liverpool Debut
By Bustle UK
Taylor Swift Visited The 'Glee' Set For This Bizarre Season 5 Episode
By Grace Wehniainen
Linda Ronstadt’s “Long Long Time” Plays A Pivotal Role In The Last Of Us
By Brad Witter
'That '90s Show' Is Officially Coming Back For Season 2
By Gretchen Smail and Grace Wehniainen
Get Even More From Bustle — Sign Up For The Newsletter
From hair trends to relationship advice, our daily newsletter has everything you need to sound like a person who’s on TikTok, even if you aren’t.