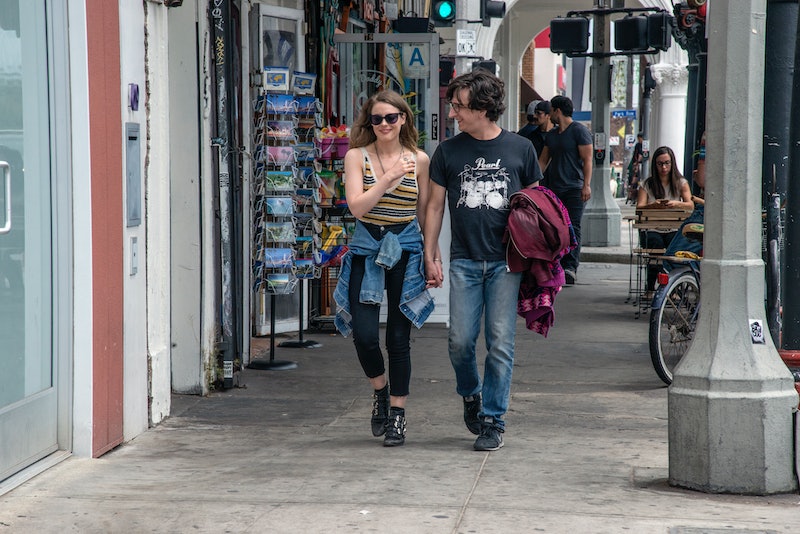 The movie Love Story may have preached the lesson of, "Love means never having to say you're sorry," but it's pretty much inevitable that if you want a relationship to work, you will need to sincerely apologize to the other person at some point or another. Spoilers for all of Love Season 2 follow. After hurting each other in Season 1, Gus and Mickey learned to apologize to each other in Love Season 2. Apologies were not only the catalyst for these two trying their relationship out again, but it became a common occurrence throughout the latest season of the Netflix series. While these acts of genuinely admitting fault were healthy and helped improve their relationship, there is a time when apologies start to not matter. And Mickey's apologies to Gus in Love Season 2 ended up not being enough to make up for her actions.

If I had to say whom I was more upset with at the end of Love Season 1, it would be Gus. While I'm not trying to excuse all of Mickey's dysfunctional behavior, she did realize she had drug, alcohol, and sex and love addictions to deal with and honestly opened up to Gus about these struggles after he hurt her by sleeping with another woman. His response to her telling him that she needed to take a year off from dating in the Season 1 finale was to kiss her, which I found completely unacceptable since it was such an enabling and selfish move.

Season 2 picked up right where Season 1 ended and despite Gus inappropriately kissing Mickey, they unsurprisingly got back together in a surprisingly not completely terrible way. This was in part because in the first episode of Season 2, Gus explained where he had been emotionally when he had hurt Mickey by sleeping with Heidi and Mickey apologized for yelling at him at work. Even though neither of them gave Mickey the space she needed to recover, Gus was much more compassionate in Season 2. And if Mickey acted out, she usually apologized fairly quickly once she had gotten out of that destructive headspace. After the two shared a nice day following Gus' mushroom trip that Mickey had encouraged (Gus even ate the leftover shrooms to stop Mickey from relapsing), it seemed these two might have a shot at a decent relationship.

As they navigated through the murky waters of a new relationship in Season 2, this good feeling continued longer than I thought it would. For example, when Dr. Greg used his jealousy to prey on Gus' insecurities at Mickey's work party, Mickey and Gus were able to have an honest conversation about it and salvage the rest of their night. Then, when Mickey was mad at Gus for telling her dad that she was in AA, he apologized for breaking her trust and she apologized for blaming him for the bad day she had with her father. Yet again, they were able to admit they both had made mistakes and move on in a productive way.

Unfortunately, a tipping point occurred right after that in Episode 9 when Mickey helped Gus house-sit. In an act of immaturity, she didn't follow the house rules since she felt Gus was judging and monitoring her recovery. And she chose to hang out with Andy Dick rather than watch the episode of Witchita that Gus created the story for. Instead of communicating to Gus that he should go to an Al-Anon meeting to learn how to best support her, or explain that she felt he wasn't handling her recovery the right way, she let her resentment boil over until she acted out and ended up breaking a $2,000 crystal bowl. Yes, she apologized, but her apologies started to have less meaning.

While it's no surprise that this "romantic comedy" isn't big on giving simple happy endings to its characters, this trend of Mickey mistreating Gus and then offering false apologies became the trend for the rest of the season. It culminated with Mickey cheating on Gus with her ex-boyfriend Dustin while Gus was away for work. Mickey apologized to Gus for pushing him away while he was on the East Coast, but that didn't seem enough after she had spent weeks blaming her issues with long distance on Gus. Not to mention, she never came clean to him about Dustin in her apology. It was all very reminiscent of how Mickey used to say meaningless apologies to her roommate Bertie in Season 1. In that case though, Bertie had been aware enough to know that Mickey's moves had been calculated and that her apologies were empty — and called out Mickey accordingly for this behavior.

Even though I was not pleased with Mickey by the end of Season 2, I am not trying to paint her strictly as a villain and Gus strictly as a victim since the relationship they have in Love is much more complicated than that — and that's one of the reasons the show resonates with me so much. It was just disappointing to see Mickey go back to this type of behavior since I had been impressed with how Gus and Mickey had been apologizing to each other in meaningful ways throughout Season 2. However, once Mickey's apologies were full of half-truths and contained no admission of guilt, that's when she crossed a line. Forgiveness is a powerful tool in a relationship, but you should only ask for it when you are truly sorry for what you did. By Mickey making conscious decisions she knew would hurt Gus — and then lying to him about it — she proved that her apologies weren't worth anything.

Although they got back together (again) by the end of Season 2, Gus will most likely discover Mickey's betrayal come Season 3. Once he knows that, his trust in her will be broken and any future apologies from Mickey will probably fall on deaf ears. While that doesn't mean that Gus and Mickey won't ever find the Love they are seeking with each other, it surely will be a major setback for them. After all, the major cornerstones of a relationship — like trust, respect, honesty, and communication — all suffer when someone in the couple misuses apologies and that can destroy any Love that might exist.