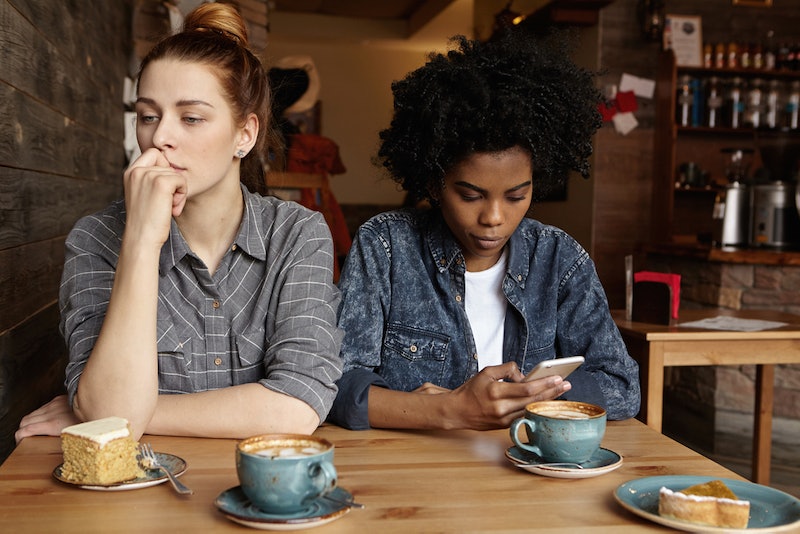 While it isn't necessarily a good idea to say exactly what's on your mind 24/7, it isn't great to go the other way, either, and suppress emotions in your relationship. If something's bothering you, and you don't let your partner know, it can obviously start to affect your connection. But did you know it can impact your health, too?

When you think about it, it doesn't feel great to hold emotions in, like anger or frustration or sadness. The more you do it, the more it eats you up inside, both physically and mentally. But before getting into potential side effects, let's talk about why you might not want to open up in the first place.

Many times, it's due to a fear of rejection. You might worry that, "if authentic feelings are expressed, it will result in judgment, ridicule, being seen as high maintenance, or even the end of the relationship," Dr. Jamie Long, a licensed clinical psychologist at The Psychology Group Fort Lauderdale, tells Bustle. Instead of speaking up and taking those risks, it can seem easier to hold it all in instead.

It might also be that conflict makes you anxious. If you think expressing your thoughts might lead to an argument, you do whatever you can to avoid rocking the boat. "Most people fear the conflict that they believe will arise if they express their true feelings on their partner’s behavior, attitude, or a situation that occurred," Carrie Mead, MS, LCPC, a licensed professional counselor, tells Bustle. "So, the emotions are not expressed and harmony resides," at least externally.

Internally, though, you might not be feeling so great, and that's because "emotional suppression is literally bad for [your] health," Long says. "Many psychological studies show us that hiding or suppressing emotions leads to more stress on the body possibly resulting in aches, pains, muscle tension, [gastrointestinal] upset, and more."

And that's not something you'll want to ignore. "When we suppress emotions it means that the internal physiological arousal of that emotion doesn’t have an outlet," Long says. "The lack of an outlet causes exaggerated arousal in the body and this stress sets off a cascade of responses such as high blood pressure and the release of stress hormones (adrenaline and cortisol)."

If you do it on occasion, it's not a big deal. But if it's an ongoing issue, and "the body is repeatedly exposed to high levels of stress hormones, it disrupts normal functioning and can cause symptoms such as pain and GI issues," Long says. "It’s the fact that suppressing emotions causes stress. And stress (whether it be caused by sadness or anger) triggers the body’s stress response, AKA the flight-or-fight mode."

Besides a pounding heart and nausea, you might also struggle to sleep at night. "When emotions are not acknowledged, labelled, and expressed, a host of problems can arise," Mead says. "On a physical level, [you] either become an insomniac (due to rumination) or [you] may sleep excessively," because you're trying to avoid the problem.

Of course, suppressing emotions doesn't just take a physical toll, but a mental one, too. "On a mental level, [you] can become depressed due to the hopeless feelings that arise when [you] see no clear path out of a situation," Mead says, "or [you] may develop anxiety as [you] become more distraught about the future with this partner," especially if major problems are going on unaddressed.

In order to make a change, it can help to keep in mind that, even though you may think you're doing yourself (and the relationship) a favor by suppressing these emotions, the opposite is more likely to be true.

When done in an understanding and civil way, conflict and disagreement can actually make you stronger as a couple. "In fact, conflict avoidance has been linked to high relationship dissatisfaction," Long says. "Further, conflict avoidant couples break up just as often as high conflict couples."

This revelation can be quite freeing, and might make you more open to sharing your thoughts going forward, which is definitely something you can learn to do. The next time you're feeling angry, or frustrated, or sad, identify what's going on, Long says, and then talk to your partner about it a non-blaming way.

It can take some time to get used to being more open with each other. But with practice, you'll start to see see the benefits of sharing what's on your mind, and fixing problems as a couple, instead of just pretending they don't exist. And that can mean not only feeling better in your relationship, but feeling better mentally and physically as well.