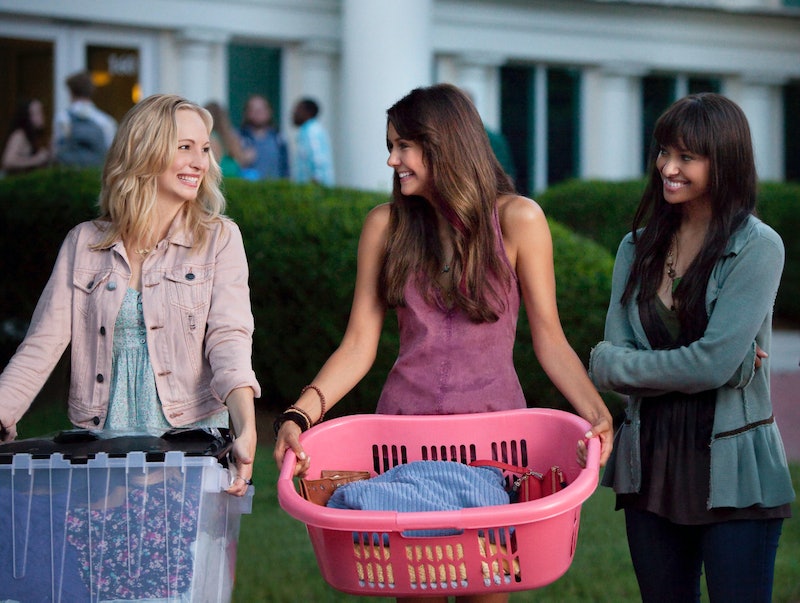 In September of 2009, I was just getting through my first few days as a college freshman in New York City. 3,000 miles away, my twin sister was busy packing to move into her California dorms. It was the first time we had lived apart, and that first month was an adjustment, to say the least. But, it was also the month The Vampire Diaries premiered on The CW. Despite the moves and the three hour time difference, thanks to The Vampire Diaries, there was one thing that didn't have to change when we started college: I could still watch TV with my twin.

From the time we were little, television was always something that I shared with my twin sister. Whether it was watching reruns of Boy Meets World after school or catching the latest episode of Gilmore Girls, we were pretty much always watching television together. Before we had lives of our own to discuss over lunch, we'd trade theories on whether Seth and Summer would end up together on The O.C. But, when we got to college, all of a sudden that bonding time in front of the TV was gone. At least, I thought it was before The Vampire Diaries stepped in.

After watching Elena and Stefan meet in the pilot, I immediately texted my twin and told her that she had to start watching The Vampire Diaries. A little bit of begging, and a lot of promises for drama, intrigue, and sassy sarcasm, was all it took to get her to relent. A few weeks into the run of the series, and we were both in love with the vampires of Mystic Falls. More than just providing us with entertainment during the hectic first months of college, The Vampire Diaries gave my twin and me an excuse to text regularly and call on the weekends. Even if we had nothing else to say to each other, we could talk about about the drama going on between Stefan and Damon for hours. But even with that connection, it was hard being apart. I missed being able to bother my twin whenever I wanted and chatting during commercial breaks on the couch while watching TV.

One night, three weeks into Season 1 of The Vampire Diaries, my sister came up with an idea: We should watch the show together. And so we did. Every week, we would find a time to sit down in our respective dorm rooms, find a way to stream the most recent episode, sign on to Instant Messenger, and watch together. Over the course of our freshman year, our college schedules became more difficult to coordinate, but no matter what changed in our lives, The Vampire Diaries was sacred. Sure, there were other shows that we both watched separately, but The Vampire Diaries was the one show we always wanted to watch together. During the episodes, we would message each other when to press Play on our episodes, or when to pause for commercials. And we sent commentary back and forth — "Damon is such a jerk," "I'm totally down for Tyler and Caroline as a couple," "OMG, what is up with Stefan's hair." For one hour a week, we were back home, sitting on the couch, watching TV together.

Our TVD dates continued for about three years, until the three hour time difference and the simple fact of growing up yanked our schedules in opposite directions. And, as we've grown up and developed different tastes in TV, our shared obsession of The Vampire Diaries has wavered a bit. Now, eight years later, The Vampire Diaries is approaching its end, but when Damon killed Tyler early in the season, there was only one person I wanted to talk to about it. And when the finale airs on Friday, I know who I'll be calling.