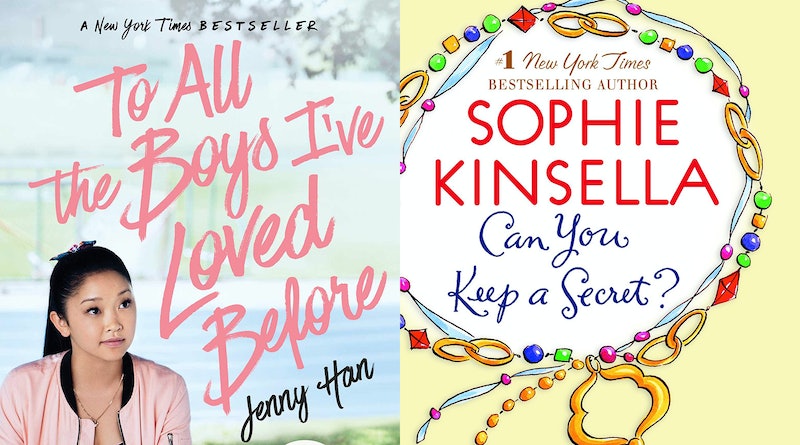 If you've ever experienced the modern dating scene (or helped a friend navigate through it) you already know that things can get pretty wild out there. Between catfishing and ghosting and breadcrumbing and Gatsbying, it seems like a lot of romance these days actually begins on a foundation of well-crafted lies and subtle manipulation. And even though I've never online dated, I've definitely fallen into the trap of not being completely honest with the person I'm seeing. I mean, who hasn't pretended to love a band just because her crush is obsessed with them? Sometimes, it seems that choosing to hide the truth is a necessary part of the dating game. But two rom-com novels — Sophie Kinsella's Can You Keep A Secret? and Jenny Han's To All The Boys I've Loved Before — have me thinking about truth in a whole new way.

Kinsella's and Han's novels deal with — you guessed it! — secrets. To All The Boys I've Loved Before follows 16-year-old Lara Jean after her secret stash of love letters are unexpectedly mailed out to all the boys she's ever loved. Can You Keep A Secret? follows 25-year-old Emma, who spills every single intimate detail about herself to her seat-mate on a harrowing and turbulent flight, only to discover that the man is actually Jack, the elusive CEO of the company where she works. Yikes, right?

Usually, the big secrets come to light during the apex of a rom-com (think the identity reveal in You've Got Mail, or the "it was all just a bet" tropes of She's All That and How To Lose a Guy In 10 Days) but Kinsella and Han took a different approach: they led with the truth. And it has me wondering, "Are we just better off telling the truth — even the messy, embarrassing parts?"

As you might expect, both Lara Jean and Emma find that there is no easy answer to that question, especially because both of their lives are changing. As Lara Jean grows closer to one of her letter-receiving crushes, Peter, and Emma contemplates a courtship with Jack, they both start to realize that keeping parts of themselves from their romantic prospects isn't really necessary and, more importantly, it is stopping them from embracing their true selves. Both of these books are becoming movies (To All The Boys I've Loved Before premieres this August on Netflix, and Can You Keep A Secret? is currently in production) and I hope that this lesson finds its way into the screen versions, too.

As a romantic comedy fan, I realize that idea is sort of revelatory. For Lara Jean and Emma, romance was not a journey from lies to truths but from truths to, well, even bigger truths. The fact that both of these women discover how they relate to the world without the aid of a handsome man who gets them to slowly reveal the "real" woman within is the sort of rom-com plot I never knew I always needed — and I think it could change the romance game, both in fiction and in our own lives. Of course, it sounds so simple, but leading with radical honesty isn't something that always comes naturally.

Now, the idea of trying to mold myself into the sort of person who I think someone else will like — whether it's by doing something small like pretending to love that movie a date can't stop quoting or something bigger like acting super chill when a dude says something super sexist — makes me laugh. This new honesty trend is one I hope we'll be seeing in rom-coms everywhere, on page and on screen. Because there is no romance more life-changing and butterfly-in-tummy inducing than the one that begins with being true to ourselves.