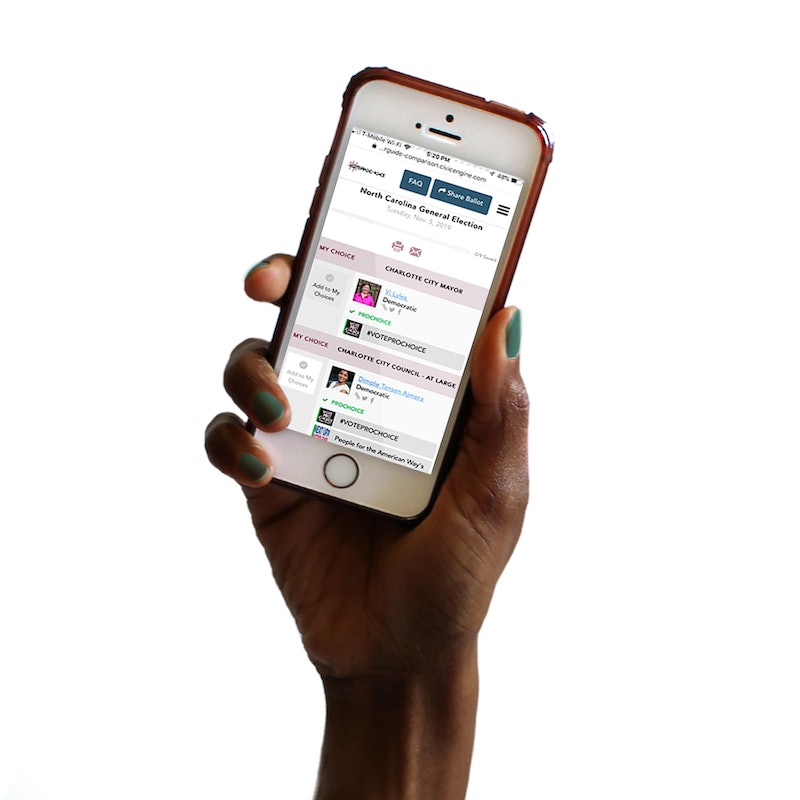 While many people are hyper focused on the 2020 U.S. presidential election, there are 49,000 elections happening Nov. 5, 2019 across 34 states — and they could help determine the future of abortion rights. However, according to national political organizing project #VOTEPROCHOICE, only 15% of voters vote all the way down the ballot in their local elections, and lots of them don't know how to find pro-choice candidates in the first place. Fortunately, a new voter guide is here to change that.

Heidi Sieck, CEO and co-founder of #VOTEPROCHOICE, tells Bustle that elected officials at every level of government inform reproductive rights legislation, so not voting this November would be a serious mistake. "Right now, we have to do everything we can to try to reclaim reproductive freedom in America," she says. "And we believe that it is about electing pro-choice champions all the way down the ballot, from president to PTA, from the senate to the school board."

If there's a local election near you and you're not sure who's running for what and where they stand on reproductive rights, using the #VOTEPROCHOICE Voter Guide can help you make an informed decision — and you might be more likely to follow through and cast your ballot. Even better, it's super easy to use on your computer, phone, or tablet.

Just visit voteprochoice.us, enter your zip code, and then select "Get Started." The #VOTEPROCHOICE Voter Guide will show you all of the races in your area, whether or not the candidates are pro-choice, which candidates they endorse, and whom they think is the best choice. You can then select the "Make a Plan to Vote" button, choose the day and time you want to vote, and enter your email or phone number to get a reminder.

Initially created to support Hillary Clinton and other pro-choice candidates in the 2016 elections, #VOTEPROCHOICE makes recommendations based on abortion stances and endorsements from relevant social justice organizations. "After the outcome of the November 2016 election, the team got together and realized that we wanted to continue. We had to — there was so much at stake," Sieck tells Bustle. "We know that we are in fact a pro-choice nation ... so why in the hell are we in a situation where Roe v. Wade could be overturned by the Supreme Court as soon as June?" It's a good point, considering 77% of Americans support upholding Roe v. Wade, according to an NPR/PBS NewsHour/Marist Poll.

And although Roe v. Wade still stands, several states have passed restrictive anti-abortion laws that make it almost impossible for people seeking abortions to get them, even in the case of rape or incest. Earlier this year, reproductive rights organizations told Bustle that they overwhelmingly disagree with the bans that will disproportionately affect people of color, low-income people, and immigrant communities. This is already evident in countries implementing similar abortion restrictions.

"In Argentina, young survivors of rape and incest have been denied their right to a legal abortion and instead forced to risk their lives to continue the pregnancy or seek an unsafe, clandestine abortion," Paula Avila Guillen, director of Latin America Initiatives at the Women’s Equality Center, told Bustle previously. "Make no mistake, the efforts in Alabama, Georgia, and other states to ban nearly all abortions will propel us toward this dire reality unless people across the country rise up and use their voice to actively protect our reproductive freedom."

If you want to safeguard abortion rights in the U.S., one of the most important things you can do is vote, and that doesn't just apply to the 2020 general election. "There are elections happening in the United States of America all the time and we need to be aware of them and not get distracted by 2020 at this point because so much can be done and saved by voting in these 2019 elections," Sieck says.

To learn more about why you should vote in local elections this upcoming November, read the #VOTEPROCHOICE report, Local Impact: How Down-ballot Seats Affect Reproductive Freedom. You can also visit the elections section of NARAL Pro-Choice America.

More like this
25 Inspiring Quotes From Black Women To Celebrate Black History Month
By Kyli Rodriguez-Cayro and JR Thorpe
24 History-Making Black Women You Probably Didn't Learn About In School
By Ayana Lage and JR Thorpe
Watch Jacinda Arden’s Devastatingly Honest Resignation Speech
By Sam Ramsden
8 Charities To Donate To During Black History Month
By Alexis Morillo
Get Even More From Bustle — Sign Up For The Newsletter
From hair trends to relationship advice, our daily newsletter has everything you need to sound like a person who’s on TikTok, even if you aren’t.