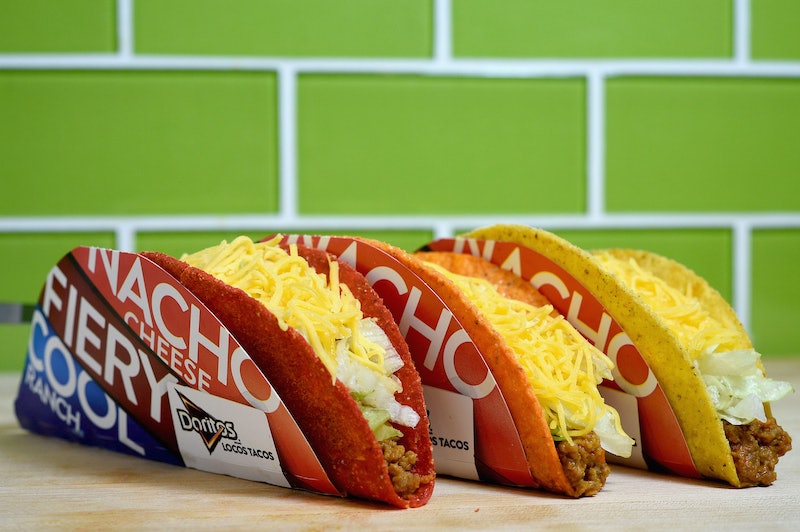 Good news for anyone who’s been craving a taco lately: You can get free Taco Bell today, June 13, thanks to the Golden State Warriors’ game three win against the Cleveland Cavaliers during the NBA Finals. The free Taco Bell in question comes in the form of a Doritos Locos Taco — and even better, all you have to do to get it is just show up at your local Taco Bell. It’s all due to the Steal A Game, Steal A Taco promo the Tex Mex chain has been running since May 31 in honor of the NBA Finals — so even if you’re not really a basketball person, you’ve still got a reason to celebrate the Warriors’ win. Because, I mean… free tacos.

Taco Bell first launched the Steal A Game, Steal A Taco promo in 2016 — which means that all three season the promo has been , it’s always ended up in a faceoff between the Golden State Warriors and the Cleveland Cavaliers, with the Warriors ultimately coming out on top: In 2016, the free tacos came courtesy of the Warriors winning game four of the finals; in 2017, it happened when they won game three; and this year, it’s due to the Warriors winning game three again, with a final score of 110 to 102. The Warriors also went on to win game four, clinching the championship for the Northern California-based team for third time in four years.

As you might expect, there are some terms and conditions that apply to the offer (aren’t there always?). First, you’ve got to be in one of the 50 states or the District of Columbia in order to snag your free taco; second, you’re only entitled to one free taco; and third, that taco has to be a Doritos Locos Taco — no substitutions can be made. Also, the free tacos are only available during the 2 to 6pm window or as long as supplies last.

Beyond that, though, all you need to do to get your free taco is roll on up to a participating Taco Bell location and ask for it — no additional purchase necessary. Bless.

Of course, Steal A Game, Steal A Taco is far from the only time of year Taco Bell offers up free food to the taco-loving masses; the chain’s “HEY, GUESS WHAT? WE’RE GIVING AWAY TACOS TODAY!” promos have historically been one of the best things about the place. The Steal A Base, Steal A Taco event — which is basically Steal A Game, Steal A Taco, but for baseball instead of basketball — usually runs during the World Series; in 2015, free tacos arrived courtesy of the launch of the now-beloved taco emoji; sometimes, they’ve granted free tacos to folks who just graduated high school; and back in 2014, another promo for free Doritos Locos Tacos was launched to celebrate Taco Bell’s mobile ordering app. It’s true that in recent years, the free food promos have tapered off somewhat — it seemed like free Taco Bell was on the menu every few months back in 2015, while these days, the offerings appear to be limited to things like the Steal A Game, Steal A Taco event — but hey, whenever anyone is willing to give me a taco for nothing, it’s a good day, so I’m not complaining.

To find out where your nearest Taco Bell is (if, that is, you don’t already know), check out the chain’s store locator here. Happy munching!