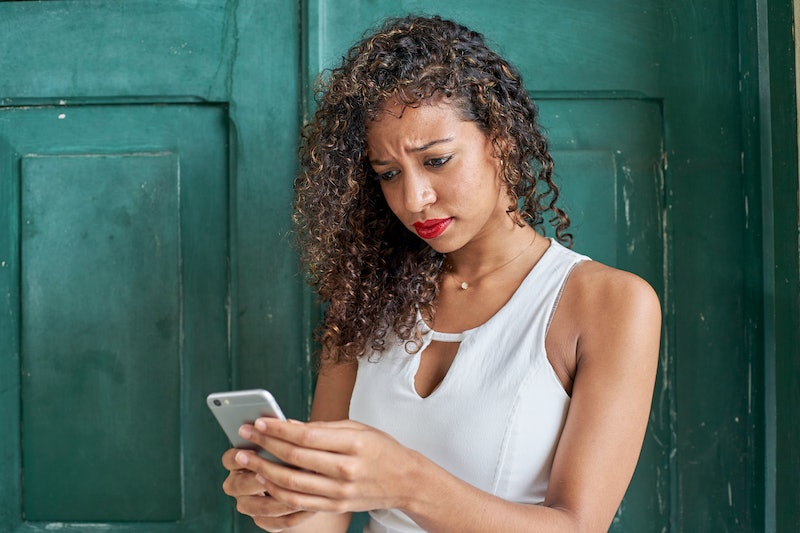 Chances are you've landed on a fake dating profile or two over the course of your online dating career. They look a lot like real profiles with real, bonafide people behind the screen. But because they're created by catfishers and scammers, they often have a few qualities that scream "fake," once you know what to look for.

About 10% of dating profiles fall into this category, so it's good to know the red flags, especially if you spend a lot of time swiping and scrolling through all your matches. "A fake profile is anywhere the person is misrepresenting their true identity," Jonathan Bennett, a relationship and dating expert at Double Trust Dating, tells Bustle. Fake profiles are created for a variety of reasons, he says, including catfishing for attention, marketing products, or even scamming people out of money.

The whole reason they work is because they look legit. But according to DatingScout, you can often tell what's real from what isn't by looking at the photos. If the profile only has one or two pictures, consider it a red flag. And the same is true if the photo is one with a white background, as that could indicate it's a stock image yanked from the internet, and not actually them.

Should you spot one of these telltale signs, take a beat and examine the rest of the profile. "If a person seems too perfect, it's a red flag you could be dealing with a fake," Bennett says. This might mean they have extremely professional looking photos, he says, versus ones where they're just casually hanging out with friends or family. Or that they're bragging a bit about things like wealth and status, which could be a ploy to lure unsuspecting daters in.

Of course, it's not just people making these profiles, but computer programs. "If the wording and grammar on the profile seem off ... it is a sign you could be dealing with a fake or a bot," Bennett says. These profiles are created with the goal of scamming you into sharing private information, as mentioned above, or tricking you into clicking on malware links.

If someone's profile answers seem all weird, disjointed, and robotic, don't bother engaging. And the same goes for profiles that seem like they're trying to sell you something, which is more common than you might think. "If the profile is focused on sending you elsewhere to contact the person in the profile, like a website, it's likely a fake trying to scam you or market to you," Bennett says.

The ultimate test, though, is seeing if they'd be willing to hop on FaceTime or meet up with you in person, Emily Pfannenstiel, LPC, a licensed professional counselor who specializes in relationships, tells Bustle. "If you are speaking on a dating site," she says, "the assumption is that you are planning to meet up and go on a date at some point." So you'll definitely want to back away and move on, if they refuse.

Another way to ensure you're chatting with a real human, and one who wants to go on a genuine date just like you, is by checking to see if they've included their social media pages. "Many dating profiles allow linking to social media," Bennett says, since it can serve as further verification.

Even though you should be focused on meeting new people and having fun conversations, online dating is all about keeping an eye out for these red flags, too. You obviously won't want to click on random links or wire money to strangers, and you won't want to chat with folks who have stock images for profile photos, either. Look for social media links along with real photos and human-sounding info in profiles. And if something seems off, trust your gut.

"If you're pretty sure the person is a fake, then I would recommend reporting them using whatever mechanism is available," Bennett says. "Scammers, marketers, and other fakes take away from the true purpose of dating apps and make finding love that much harder." You can also choose not to engage in a conversation if something seems strange, and instead save all that energy for the real folks who have good intentions.

Once you feel the conversation is rolling, and you'd like to see who is on the other end, it can also help to plan a date. "This way, you can know right away if the person is who they say they are (if they aren't, they'll be likely to not follow through), and if you like them and want to date them in the first place anyway," Pfannenstiel says. "So set up that date early on and you will be less likely to be catfished," and way more likely to find a great partner.