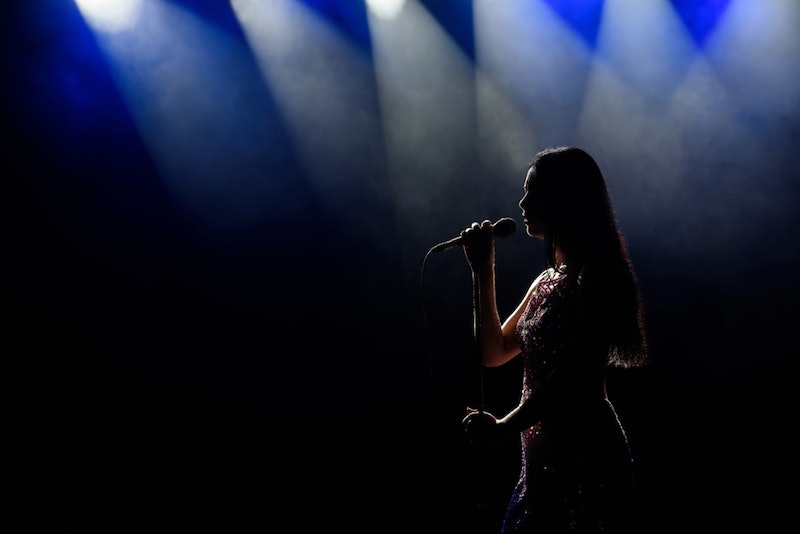 I'll never forget my introduction to awards shows. That part of the story in and of itself is nothing crazy; like so many bored middle schoolers of the early 2000s, I had nothing else to do on a Sunday night, so I joined my mom in our family room where she'd been tuned into an awards show. Though that memory is pretty unremarkable, it's what I witnessed on the screen for the first time that left my sensitive, pre-teen heart feeling some hard-hitting secondhand embarrassment.

Following an award announcement, the honoree approached the stage and was in the middle of delivering a heartfelt acceptance speech, when suddenly, without warning, they were cut off from their speech on live TV by rousing orchestra music, leaving them to be unceremoniously escorted away from their moment in the spotlight. I had never cared much about awards season before, but to me — a kid in front of their TV in small town, Indiana — there was something deeply cringe-worthy about catching Hollywood's elite committing what my mom explained to me as a serious faux pas. (I was, like, 12, and we're talking about very public embarrassment — OK?)

From then on, acceptance speeches cemented themselves in my mind as the most dramatic part of any awards show broadcast. Every year, I watch the regular schedule of awards shows for those unexpectedly exciting moments, but recently it feels impossible not to notice that these familiar acceptance speeches are pivoting into a direction that pushes all of us to feel a bit uncomfortable, and for good reason.

Gradually, the tone of speeches has become less celebratory of an accomplishment, and more of a platform to advocate for change — especially those for marginalized voices in the film industry. And this year, women are seizing the opportunity to redirect the spotlight away from themselves and onto a number of bigger conversations, like Hollywood's ever-present issue of pay inequality — an issue that's not going to change unless we have uncomfortable conversations about it.

In an effort to help lift these voices to the forefront of the pay gap conversation, Visa is continuing their "Money Is Changing" campaign — which is all about encouraging women to start open, honest conversations about money in hopes of breaking down the taboos that surround the subject. As their campaign moves into 2019, Visa is taking this initiative to the next level by committing themselves to providing the tools, knowledge, and confidence to women to talk about money more openly and readily — just check out their 2019 awards season spot as proof:

Beyond talking to women within the film industry about how they changed their attitudes around money, Visa commissioned a national survey by Lieberman Research Worldwide (see a summary here) to uncover insights around millennial women's attitudes towards money — and some of the findings prove that the women speaking out about equality this awards season are advocating to change a larger problem. For example, the Visa commissioned survey found that even though 36 percent of millennial women believe salary should be completely transparent, only 10 percent of us have told our salary to a coworker — which in turn allows the same cycle of pay inequality to continue, totally unobstructed.

36 percent of millennial women believe salary should be completely transparent

Historically, talking about money has always been super uncomfortable. Anyone else grow up with parents who taught them that discussing money with friends or family was tacky? But the reality is, there's power in conversation. Women are rallying together to take major strides when it comes to pay inequality, and the more of us there are who feel comfortable speaking up for change, the harder we'll be to ignore.

More like this
The Mysterious Gunther Corporation From 'Gunther’s Millions' Has Dissolved
By Brad Witter
Maya Jama’s Net Worth Definitely Won’t Give You The Ick
By Sophie McEvoy
What Is Pamela Anderson’s Net Worth? She Was Never Paid For Her Stolen Sex Tape
By Hugh McIntyre
This Is When Netflix Is Going To Start Charging You For Sharing Passwords
By Darshita Goyal
Get Even More From Bustle — Sign Up For The Newsletter
From hair trends to relationship advice, our daily newsletter has everything you need to sound like a person who’s on TikTok, even if you aren’t.