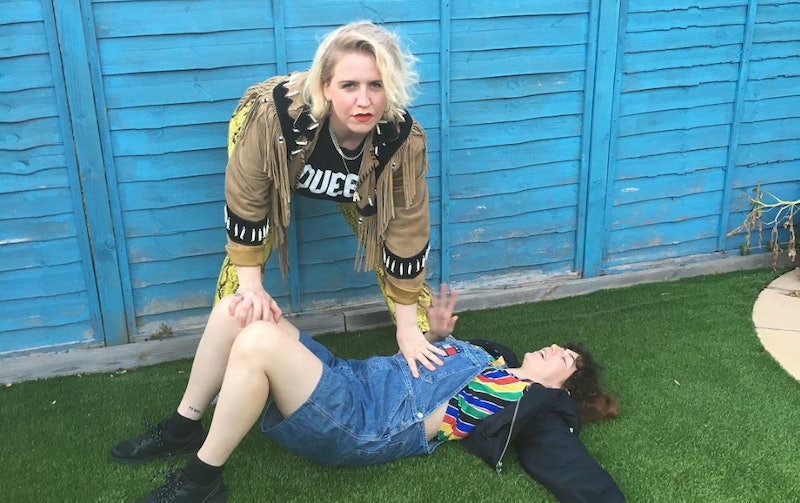 Dry January. NOvember. Prohibition. Periods of sobriety are nothing new, but post- or pre-Christmas detoxes seem to be the most popular. However, always one to be a little different, I have chosen to go sober for February, in the interest of my physical, emotional, and mental health. This is a personal project to work out: is it the booze that's getting me down? The connection between alcohol and mental health is undeniable, but am I drinking because I feel crappy, or am I feeling crappy because I drink?

Giving up drink for February? No biggie, I hear you say. That isn't, like, a major drama. And (as my girlfriend pointed out), isn't February the shortest month in the year, anyway? Well, what if I told you I haven't gone more than a fortnight without drinking in say... 15 years? Then maybe it might be more clear why taking a look at the deeply ingrained drinking habits is feeling kind of important and grown-up to me at this point.

Sobriety is kind of "cool" right now. According to recent research, generation Z aren't down the nearest drinking pit nailing Blue WKD or Smirnoff Ices, and they have probably never vomited up a Malibu and coke. Not even once. No, y'all, they are too busy doing yoga and caring for themselves with positive action. They're not self medicating with red wine by the gallon and crispy clean pints of lager down the local.

As part of my research for this project, I will be speaking to various different people who I believe will help me stay off the bottle. An addict who has been sober nine years, a doctor, and basically everyone and anyone who will let me interrogate them about drinking (or lack-there-of). I will also be taking up activities and social engagements that are booze-less.

What kinds of concerns could I possibly have about giving up liquor? Well, TBH, I have a lot of concerns. How will I socialise? How will I cope with ups and downs? Am I a high-functioning alcoholic?

A friend of mine, who wants to remain anonymous, has been sober for nine years. Let's call them Temperance. Temperance is not only someone who seems chill as can be, but someone who hangs out with a gang of real party people who stay up until the wee hours living that young Hollywood life — and manages to do so sober. Anyone who has had to talk to wasted people while sober knows how effing boring it is. This is why they are, to me, an inspiration. Someone who can have fun, socialise, and not hit that bottle.

Curious to know what pushed my friend to go sober, I asked them: at what point did you think enough was enough?

"I knew the end was nigh when I woke up in a pool of my own vomit after a night out (that I had no recollection of) with a cleared-out bank account and a full toolbox at the end of my bed. I never did work out where the toolbox came from."

Let's be real. That story is awful, but on the flip side, you could imagine that featuring in a comedy show, with the audience laughing it off. And how many times have you got completely wasted to the point of being physically ill and everyone has laughed about it? Drinking culture in the UK and Ireland is effing effed up, and TBH I know many who are victim to this acceptance of binge drinking. Drinking is seen as fun, normal, and necessary.

Scarily enough, some people close to me rolled their eyes and were clearly disappointed when I told them that I am going sober for February. "You'll be no fun," one said. Sadly, these friends are going to have to be out of my life for a little while, as advised by Temperance. "AVOID anyone who makes you feel uncomfortable about being sober," was their advice.

As the first part of my experiment, I will be filling my time by starting a new gardening club in my neighbourhood. I will also be attending one of my best friend's birthday parties, and actually conversing with people, without having a drink before. That's a scary and anxiety-filled thought. But, y'all, maybe minus booze, these anxieties might recede somewhat.

Why don't you join me in this quest? If I can do this, then you can too. Today is day one. Progress updates will follow in this warts-and-all account of an excellent drunk becoming an excellent abstainer. Well here's hoping.

More like this
Got Brain Fog? Here Are The Best Supplements For Memory & Cognition
By Carolyn Steber
Wondermind Just Launched A Site That's All About Supporting Mental Health
By Carolyn Steber
Isa Guha Is Taking The Lead
By Charlie Mock
I Tried The Air Up Water Bottle, Which Flavors Your Drink With Scents
By Carolyn Steber
Get The Very Best Of Bustle/UK