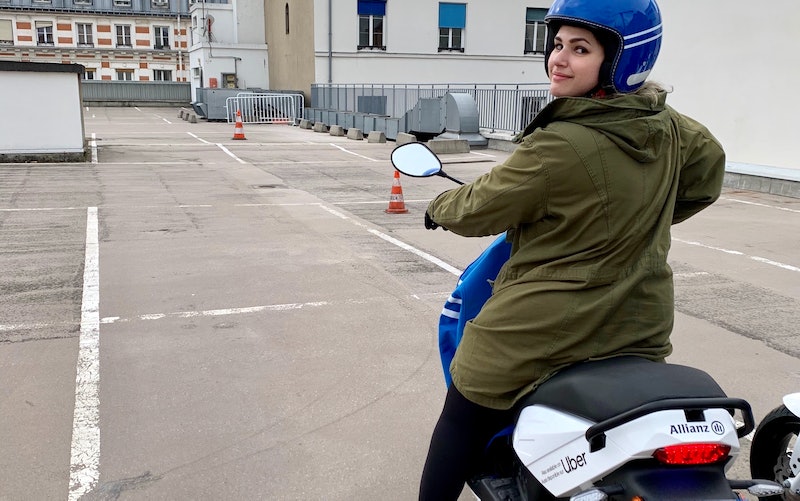 When it comes to significant moped moments in pop culture, there’s none more noteworthy than the scene in the Mary Kate and Ashley Olsen film Passport to Paris that features the twins — Melanie and Allyson, the ultimate 1999 cool girl names — riding easily on mopeds with two French boys, named Jean and Michel, who they met during a Spring Break adventure in the city of lights. I'd be lying if I didn't picture myself breezing through the Place de la Concorde like Jean and Michel when Uber invited me to be one of the first to try out mopeds in the Uber app. The movie’s soundtrack would play, I would arrive at my destination and somehow magically shake off my helmet hair, and it would be the easiest thing I’ve ever done.

However, my experience with Uber mopeds — which are set to be released as a brand-new mode of transportation offering to Uber users in the Paris metro area and surrounding suburbs in November for 0.29 euros a minute, which is $0.32 a minute in USD (though it's just launching in Paris to begin with, a representative from Uber tells Bustle that there may be plans to expand it to other cities in the future) — was actually nothing like that of course, because this is not a Mary-Kate and Ashley movie.

Mopeds being added to the Uber app isn’t that surprising of a leap when you think about it — especially not for a tourism-heavy city like Paris, especially. Prior to the mopeds, Uber introduced a partnership with JUMP, an electric bike-sharing company, in April 2019, which saw electric bikes and scooters added to the digital platform in cities like Paris and London. As a representative from Uber tells Bustle, since the launch of bikes in the app in April 2019, there have been over a million bike trips booked through the app, so it can be gathered there's a demand for an alternate mode of transportation option.

Major spots like Paris, London, New York, Los Angeles, Berlin, Brussels, Barcelona, etc. are all rife with alternative travel options. Segway tours are recommended as a way to see tons of popular attractions and cities, golf carts — or, “small electric vehicles” as they’re called on the site — are made available for rent at places like the Palace of Versailles in France, and mopeds are a popular option for visitors because they’re easy to weave through the tiny streets of most older towns around the world, particularly in Europe. Bikes and scooters, of course, also remain popular choices as well.

For its new fleet of mopeds, Uber has partnered with Cityscoot, a Paris-based company that offers electric moped rentals to users in Paris, Nice, Rome, and Milan through its app. Like its deal with JUMP, the partnership will offer users the opportunity to book moped rentals throughout Paris and some surrounding suburbs through the Uber app, which is meant to encourage more riders to try taking a new mode of transportation — one that’s not only different, but also will put less stress on already crowded roads in Paris.

As a first-time moped rider, I realized Jean and Michel from Passport to Paris were like professionals despite being only 13 while I, like Jon Snow if Winterfell had mopeds, knew nothing. Luckily, Uber will offer classes for first-time moped riders that are taught by Cityscoot professionals if they would like to learn how to properly ride one — otherwise, there are instructions built into the Uber app which explain how to properly operate the moped, proper safety measures to take, and how to follow the rules of the road.

Esther Porte, a global product marketing manager specializing in new mobility at Uber, tells Bustle that partnering with Cityscoot means that Uber users can benefit from the vast amount of mopeds the start-up has, as well as the company’s offering of free safety-based classes that teach users how to ride mopeds.

The availability of safety classes are an important thing to note, especially for tourists: While you do need to show that you have a driver's license to actually rent the moped, actually driving one isn't the same as driving a car. Electric scooters have been the popular mode of transport du jour as of late, but with mopeds coming to Uber in the app, the amount of first-time users is likely to increase.

And this can lead to dangers on the roads: in fact, if you count the rise of electric scooter usage, it already has. In 2018, the Centers for Disease Control and Prevention (CDC) released a the findings of a study that suggested many injuries related to dockless electric scooter were head injuries due to lack of helmet use: The study tracked 271 participants over an 87-day period, and of that group, 130 were confirmed to experience an electric scooter-related injury. Of those injuries, 45 percent were head injuries — and, most damningly, under one percent of people reported wearing a helmet. By the end of the study, the findings suggested an electric scooter-related injury incidence rating of 14.3 percent per 100,000 trips. Similarly, an investigation by Consumer Reports in February 2019 found that there had been a minimum of 1,545 accidents related to electric scooter usage in the U.S. in 2018, though they suggested the number may be higher due to a lack of reliable data from some state emergency services and police departments.

All of this makes taking safety — and investing time in a free class — extremely important.

How Mopeds On Uber Will Work

Mopeds on Uber will work pretty similarly to how you already hail a ride on the app, except instead of waiting for the nearest driver to accept your ride request, all you have to do is open the app, select the moped option, and click on whatever nearby moped you want to reserve. Each moped’s location is geotagged, so you can see its exact distance to you at any given time — they’re parked all over the city. Once you reserve the moped, you have 10 minutes to find the bike and punch in a unique four-digit code from the app into a numeric keypad near the handlebars. This will officially begin your reservation. From there, you can ride to your heart’s desire.

Porte says that while users just need a valid driver’s license in order to be able to successfully rent a moped on the app, they are encouraged to take a class if they are a beginner.

General rules of safety dictate that moped riders must wear a helmet and gloves at all times while operating the machinery. Each moped comes with a helmet that’s stored under the seat, which a Cityscoot representative tells Bustle is checked twice a week by a technician to ensure is up to safety standards — if anything even so much as appears to be wrong with it, it’s replaced. When it comes to hygiene (aka, everyone is wearing that helmet, and helmets get hot!), the mopeds also come with hairnet-like inserts that riders can wear before under their helmet. The helmet hair will be worth it, because safety.

Additionally, the mopeds come with apron-like covers for users to place over their legs as they ride, the benefit of which is that it has a clear, touch screen-sensitive pouch you can put your phone into when it’s set to a navigation app. The bikes also have hooks for your bag under the apron, so you don’t have to worry about lugging around a backpack while you’re trying to drive heavy machinery.

A few things struck me off the bat when I tried Uber mopeds for the first time.

The first: Mopeds are much larger than you think they're going to be. When I crawled on top of mine to begin testing it out, I was surprised to note that my toes barely touched the ground while I was seated on the bike holding the breaks down. I'm about 5'5", which generally seems to be considered a fairly average height, but mopeds will make you feel really short.

Second: I found there are few things more terrifying than the initial moments you realize that you are currently on the roof of a concrete parking garage, riding a rapidly accelerating moped for the first time, with only a helmet and leather gloves to protect what you’ve just realized is your really stupidly fragile human body.

Your feet will probably shoot out from the moped foot rests to find the pavement, their rightful place, like mine did. And you’ll probably quickly realize how terrible an idea that was because you’re still accelerating, only now your feet are on the ground so you’re also running, and there’s a giant moped under you pulling your entire human — again, super fragile! — self a maximum of 28 mph because thankfully that’s as fast as this moped is programmed to go but still you’ve never run that fast and especially not with a giant bike under you! It’s all very different to what you're used to when you walk on the street normally.

Though I’m still no mo-pro, practice does indeed make a tiny bit closer to perfect.

The third: Just how hard it is to turn on a moped. It's frightening to accelerate initially, but you do eventually end up getting the hang of that after you get over your fears of falling. But turning? Whole other ball park. I was told by Cityscoot instructors multiple times to look in the direction I wanted to turn, and every time I attempted to do this, I nearly a) hit a wall, b) hit a concrete barrier, c) nearly tipped over on my moped, d) accelerated too much, freaked myself out, tried to put my feet to the ground to slow down, realized that was a terrible idea, and then pulled on the breaks finally to stop, or e) some combination of the above. And still, every time, Cityscoot instructors tell me that I was still "looking down" when I tried to turn the moped.

The fourth: It was difficult, but so is learning to ride a bike, or ice skate, or roller blade — with the help of an education instructor, you just have to practice. As one of the instructors told me, some people are naturals who pick up moped riding within five minutes... and the other 95 percent of people will pick it up after practicing. I think both he and I agreed that I was firmly in the latter category after I toppled over on the moped, hopped off in the most ungraceful manner one can hop off a capsized moped, and then accidentally accelerated it while holding onto the handlebar and ran with the bike for about 10 seconds.

I would do it again, still. It was fun, practice does help you get more comfortable with riding the moped, and Uber's safety offerings are vast enough that it doesn't feel like your life is being neglected. If you're visiting Paris and want a unique way to see the city, renting a moped feels like definitely a good and Parisian way to do it — being able to do so through Uber's app is just going to make it a lot more accessible.

Just take the class first so you don't do everything wrong that I did, which was everything. Don't be a me. Be a Jean or Michel.