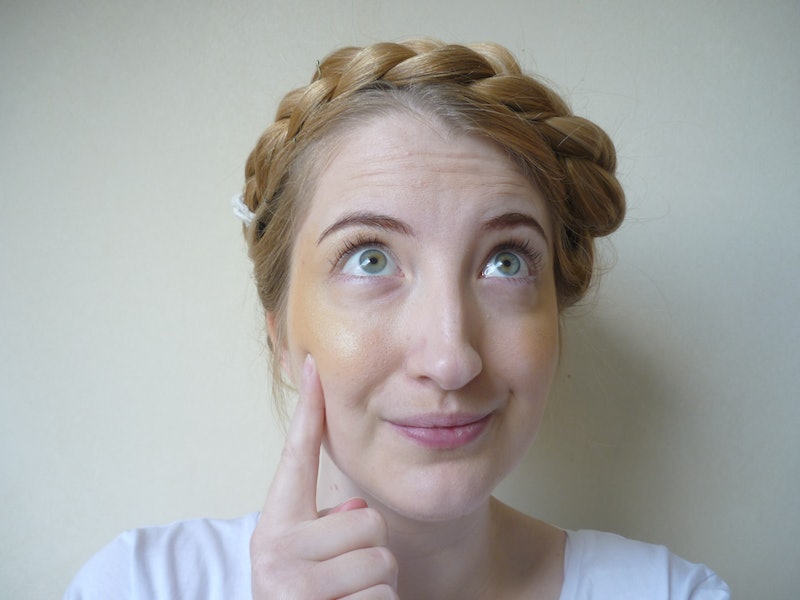 I'm always on the lookout for new trends to experiment with and I had my eyes peeled for one that would set me up for summer. I was pleased to find exactly what I had been searching for — I tried the summery yellow blush trend that Instagram is loving. Because if any shade screams summer, it's yellow.

Associate Digital Editor of Allure Devon Abelman, reported on yellow blush being the latest spring makeup trend on Instagram and delved into the deets of the look. As the name suggests, yellow blush is literally wearing a yellow hued "blush," which in actual fact, is eyeshadow, because yellow blusher doesn't exist...yet. Although considering the wide spectrum of shades highlighters come in nowadays, I wouldn't be surprised if cosmetics companies started creating rainbow colored blush too.

Abelman told readers, "Most of us already have yellow tones that naturally occur in our skin, so yellow blush just accentuates what we've got and gives our beauty routine a new brightening booster. (You can never have enough.) If you're still unconvinced, think of it this way: yellow is like peach or even brown's long lost sibling. The rest of your makeup can be in these tones or you can contrast it with red or blue."

So I decided to trial this seasonally appropriate blush in everyday life, to discover if I kept my usually sunny disposition intact or if I looked like a character from The Simpsons.

To test-drive this look IRL, I decided to go for my everyday makeup look, replacing my normal rosy pink blush with yellow eyeshadow. This is me fresh faced and sans makeup.

So I followed my usual makeup routine which consists of moisturizer, a touch of foundation, filling in my brows, and mascara. I was ready for the final step: The yellow blush. I was feeling a little dubious due to the fact I didn't want to look as if I was suffering with jaundice.

I decided to go with "Mustard" from Lime Crime's Venus 2 Eyeshadow Palette as my main shade.

I thought this might be a bit harsh on its own as a blush, so I used "Fly" from the same palette as a highlighter of sorts.

At first, I really disliked how these shades looked on me — I'm no MUA but I believe my skin has quite a lot of yellow in it anyway, so I felt like I looked seriously sick.

I felt the eyeshadow looked like my actual skin, rather than makeup, and I was a worried about bumping into people I knew and folks thinking that my health was deteriorating.

I live in quite a small town so the possibility of me bumping into people I know was quite high.

But, I did like how the shade "Fly" made my look less one-dimensional and helped it to appear more like makeup, rather than jaundiced skin.

I also liked how the yellows made my eyes pop; they're green but oddly enough, they do have some specks of yellow in there too.

I was feeling slightly nervous about taking this avant-garde look into my small hometown in the North of England, but my curious side needed to know how this unusual blush would realistically be received in real life. Posting a creative makeup look on Instagram from the comfort of your bedroom is one thing, but wearing it out on the streets in another thing entirely.

At the beginning of my day, I needed to return a dress to a friend. As I walked to her home, my heart raced as I passed person after person, but nobody seemed interested in my sunny side up cheeks. I felt mildly disappointed that my makeup didn't seem to be as crazy as I thought.

When I reached my friend's abode, she told me that my blush looked, "fresh" and "spring-like" and she said she thought it suited me. She is seriously one of the kindest people you're ever likely to meet.

Her kind words gave me a little lift and I felt positive about the rest of the day.

After completing my errand, I needed to get on with some work at home. It was super easy to forget about my lemony cheeks while my mind was on task and I actually felt pretty normal for a while.

In certain lights I felt like my yellow blush gave me a healthy glow, almost like a sun-kissed tan. Perhaps I'd been over-thinking this whole thing?

After lunch, I had a stroll into town to complete some more errands. I popped on my sunglasses and realized that they covered up a fair amount of my blush, however I was going about my day as normal so I didn't remove them.

I made a stop at my favorite coffee shop on the way. My friend owns the coffee shop and he served me without any comment on my appearance. When I mentioned I was conducting a beauty experiment, he looked perplexed, so I explained about my yellow cheeks, to which he replied that it looked very subtle. I was unsure whether my "blush" was fading as the day went on.

After my coffee stop, I hit up my local mall. A sales assistant helped me in the first store and mentioned nothing about my appearance; although this could have been down to her professional work ethic.

Upon entering the next store, low and behold, I came across a friend of a friend who said, "You're looking well!" I got to wondering whether I'd perceived yellow blush from the wrong angle and wondered if, in reality, it made me look healthier.

I made my way home and believed my trip out to be a success. But, just when I thought I was safely across the finishing line, I spotted a guy I went to school with who was a bit of a bully. Even though I was the victim of his taunts only once, I remember it to this day: The incident involved chalk pastels and my face. And also his face. We both got into bother for the messy fight and were made to sit outside the classroom — something my younger goody-two shoes self was mortified about at the time. So, this guy clocked me, but I was unsure as to whether he recognised me, as we hadn't set eyes on each other for a decade or more unless in passing. Then the strangest thing happened... Nothing. No remark, no snide comment, not even a hello. I took this as a win of sorts.

Would I Wear Yellow Blush Again?

Honestly? No. While I did receive a lot of positive feedback during my day of sporting yellow blush, it's really not a look I like on myself. It looks totally rad on some people, but with my pale complexion and skin tone that (I believe) contains rather a lot of yellow, I don't think it does anything for me.

Okay, maybe it does make my eyes pop a little. IMO, that's not a good enough reason to feel as if I look sickly. Perhaps yellow blush will look better on me in the height of summer when I'll hopefully have a tan. But for now, this is one beauty trend I just can't get behind.

To all those whose favorite color is yellow — I'm sorry. But don't be put off by my experience, because everyone's skin tone is different. So if you love this summery shade, why not give yellow blush a try?