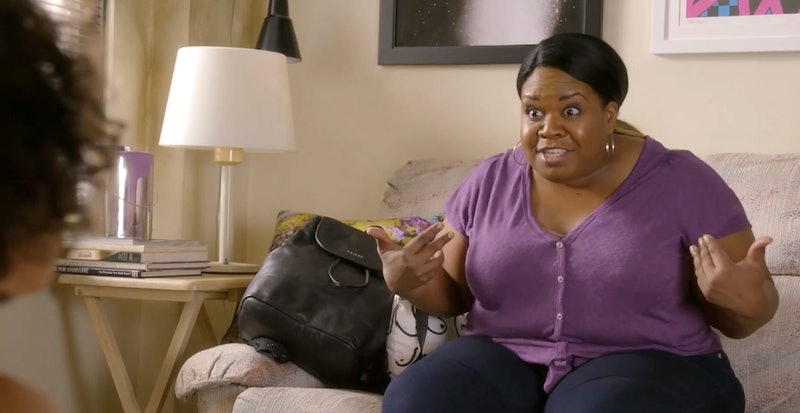 Spoilers ahead for Broad City Season 5, Episode 8. Ilana is dealing with a lot of change with Jaime, Eliot, and now her dear BFF Abbi leaving New York. But she potentially has a new buddy thanks to Ilana's roommate Yamaneika on Broad City, played by comedian Yamaneika Saunders. During the March 14 episode, Yamaneika takes Jaime's old room in Ilana's Gowanus apartment, and while she isn't a substitution for Jaime and can't replace the intimate friendship Ilana has with Abbi, she can still offer some companionship to the forlorn Ilana. The soon-to-be grad student may be losing her Broad City bestie to Boulder, Colorado, but she at least has a roomie again.

A roommate can simply be a person you cohabitate with, but this is Ilana we're talking about. Right off the bat, she makes it known that she's not going to adhere to typical roommate rules. She asks Yamaneika if she'll keep her company when she showers by sitting on the toilet and talking to her, and Yamaneika agrees. This could just be due to her desperation to stop crashing on her friends' couches as she has been doing for the last month, but she also isn't scared away by Ilana and they share the same thoughts on the Olsen twins. (Broad City with the very aptly-timed discussion of Full House scandals.) Yamaneika, like Ilana, also isn't always the best at being accommodating and respectful, considering she didn't share the fact that she has two Great Danes. But Ilana nonetheless finds Yamaneika to be "very f*cking cool," so a deeper connection could be forged here — even if Ilana is not so stoked about the situation at the moment.

While Abbi leaving New York was teased in the previous Broad City episode, Ilana was blindsided (broadsided?) with this information during "Sleep No More." Her reaction is completely characteristically over-the-top — just as Abbi feared — but she's eventually able to admit she's proud of Abbi for following her dreams. Of course, she's still upset, and while Yamaneika will be helping Ilana to pay the rent, it's not like she'll instantly become a close friend — if they become friends at all.

Knowing Ilana, she'll most likely recruit Yamaneika to participate in her shenanigans and maybe her new roommate will help soften the blow of Abbi leaving. Ilana starting school will also be a good distraction. Plus, Yamaneika's Great Danes (named Beyoncé and Jay Z!) will be of some comfort to Ilana — even if she was too sad in "Sleep No More" to fully appreciate their fabulous names.

As for the real Yamaneika, Saunders has posted her excitement about being on the final season of Broad City on social media. She already has a connection to Comedy Central since her stand-up comedy had been featured on the network, and she's been on In Security and The Nightly Show with Larry Wilmore. You can also check out her stand-up in the Netflix special The Degenerates. She even has a specific tie to Broad City, as she appeared in Eliot Glazer's Haunting Renditions show in 2018. (Glazer not only plays Eliot on Broad City, but he's Ilana Glazer's brother IRL.) The comedy show was held at the Bell House in Brooklyn, which is located ridiculously close to where Ilana's apartment is on the show, so Yamaneika becoming Ilana's roommate was pretty much destiny.

With only two episodes left, Yamaneika isn't going to get a ton of screen time. You can keep track of Saunders after Broad City by following her stand-up and through her Rantin' and Ravin' podcast. And while Broad City fans aren't guaranteed to know how Yamaneika and Ilana's relationship turns out, there's hope for this pair to hit it off — as long as Yamaneika can handle Ilana constantly FaceTiming with Abbi in Colorado. Because though the best friends fought in "Sleep No More," their friendship will always be able to handle the distance.