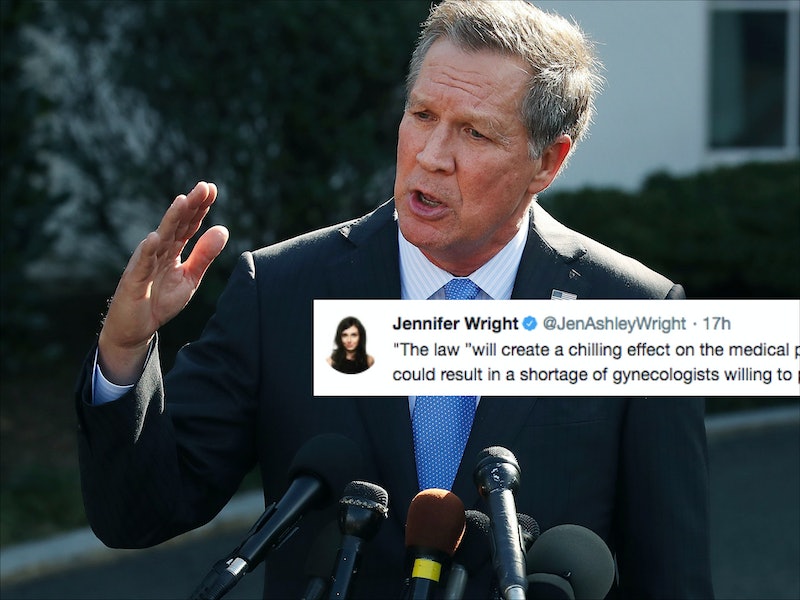 Last week, the Ohio Senate passed a Down syndrome abortion ban that would make it illegal for health care providers to perform abortions on patients they know have a fetal diagnosis of Down syndrome. The bill is now awaiting a signature from Ohio Gov. John Kasich, who is known for being a strong opponent of abortion, and could become law any day. As a disabled woman who believes in a woman's decision to choose abortion, I find this disastrous bill harmful and incredibly insulting to both women and people with disabilities.

The Down syndrome abortion ban, also known as Ohio's House Bill 214, punishes clinicians for performing abortions that were sought specifically because of either a potential or a conclusive Down syndrome diagnosis. Similar bills have already been passed in two other states, North Dakota and Indiana.

This bill angers me because by bringing disability into the conversation around abortion, Ohio's GOP leaders are trying to distract people from the fact that this is ultimately an unconstitutional abortion ban.

Legislators and anti-abortion activists claim that the goal of this bill is to fight discrimination against people with disabilities, but as a disability journalist and someone who's lived with a disability all her life, I don't believe banning abortion is the answer. In fact, it pits the reproductive rights and disability movements against each other when they are both in the collective fight for equal rights for all people. The maddening truth about House Bill 214 is that it shows politicians are trying to ban abortion in the name of disability equality and to fight disability prejudice — when it doesn't do that at all.

The decision of whether or not parents should keep a child with a disability diagnosis is hotly debated in disability communities; it is both personal and political. On one hand, people with disabilities need to be treated with equal respect and equally valued in society. This is not about something that would be "nice" for us to have — this is a fundamental human right.

I was born with vocal cord paralysis, and I've worn a tracheostomy tube to help me breathe for my entire life. My disability doesn't affect my ability to work or live on my own. It hurts me deeply to imagine what would've happened if my parents had known about my disability beforehand and had not decided to keep me solely because they didn't want a child with a disability.

At the same time, I am a staunch pro-choice advocate. Although I am not a fan of political labels in general, just to be clear, "pro-choice" does not mean "pro-abortion." Being pro-choice means that I fully support a woman's choice to make her own personal health care decisions — and yes, that includes whether or not she should have an abortion (which, might I add, is a completely safe and legal procedure in the United States, thanks to Roe v. Wade). It's a very personal decision for a woman to decide whether she has the ability (and feels ready) to raise a disabled child. House Bill 214 makes that decision for women, forcing onto them a solution to apply in all situations, without taking into account the fact that everyone's life circumstances are different.

Federal and state governments have worked hard to pass various legislation to ban abortion, including 20-week abortion bans and the global gag rule, which requires that any non-U.S. organizations receiving U.S. funding must not provide or promote any abortion-related care (even referrals). House Bill 214 angers me because it shows the government is willing to do anything to take reproductive rights away from people — and that includes exploiting people with disabilities, an already underserved community that constantly struggles to fight health stigmas and fight for social equality. This bill angers me because by bringing disability into the conversation around abortion, Ohio's GOP leaders are trying to distract people from the fact that this is ultimately an unconstitutional abortion ban.

There are so many ways we can work to fight disability discrimination besides forcing a blanket ban on all women who seek an abortion.

Finally, this bill angers me because if Ohio's government cared so much about the rights of people with disabilities, they wouldn't be working to pass Senate Bill 216, which could negatively affect the quality of education that disabled students receive in the state. And Gov. Kasich and Ohio Sen. Rob Portman wouldn't have supported Betsy DeVos as Secretary of Education earlier this year when all the evidence suggested she would be a disaster for students with disabilities (and she has been). 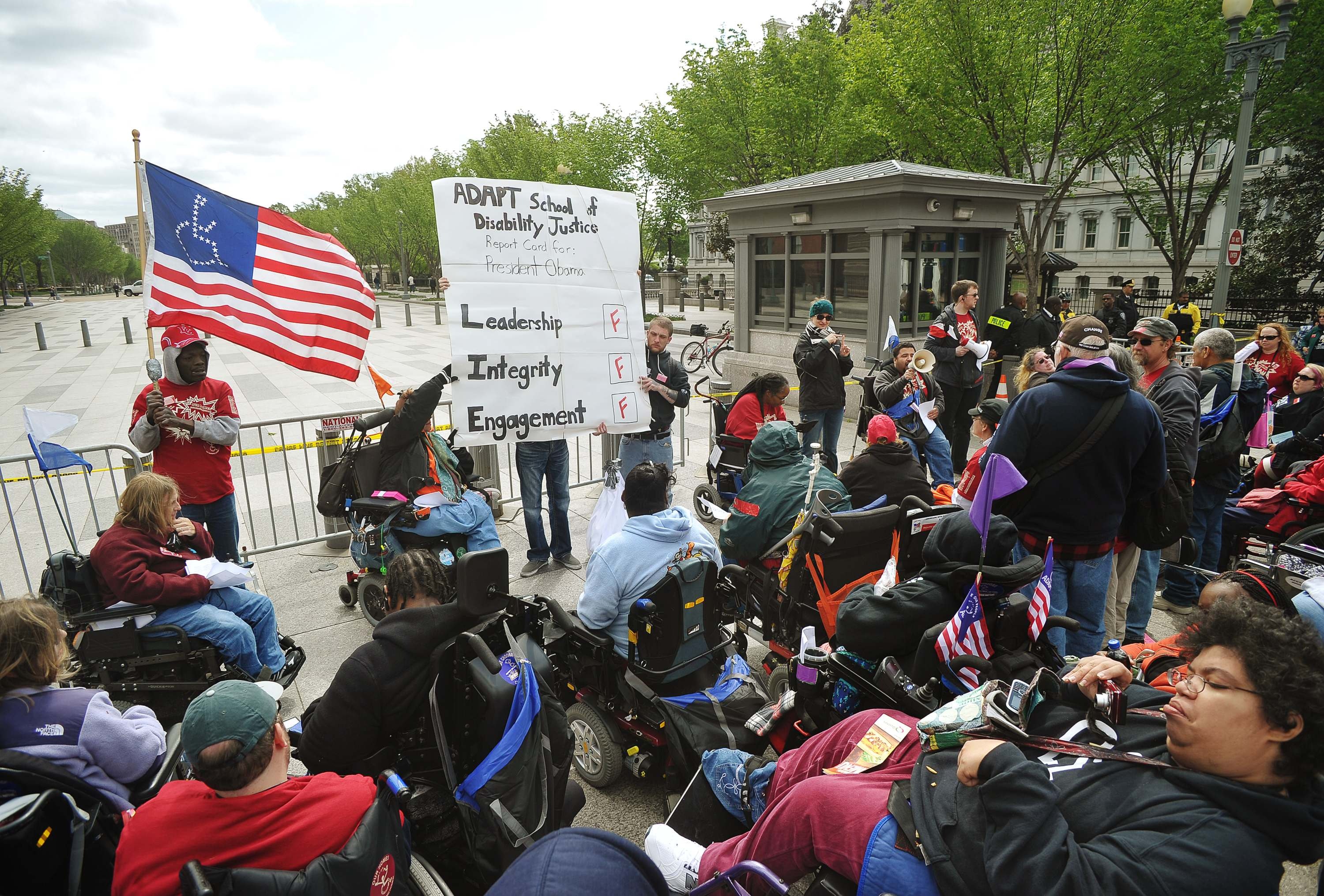 There are so many ways we can work to fight disability discrimination besides forcing a blanket ban on all women who seek an abortion. We can hire more people with disabilities, give them a voice in the media, enforce the Americans with Disabilities Act in the workplace, and make public spaces more accessible. And research shows that criminalizing abortion does not keep women from having abortions. Instead, they will continue to seek abortion in other ways that are much more dangerous than if they'd simply gotten an abortion, which is proven to be extremely safe.

Every woman's situation is unique, and abortion must remain available as one potential option out of many for all women who might need it. Reasons for why a woman gets an abortion is not anyone's business and it's not up to anyone except her, her family, and her health care provider — period. Let's trust women to make their own medical decisions.

And to the politicians in Ohio who are behind House Bill 214: Don't use our movements for disability and reproductive justice to try and further your own political agenda — we see right through you.

Editor's Note: Wendy Lu is a current employee of the Planned Parenthood Federation of America. This essay reflects only the author's opinions, and not the organization's.

More like this
24 History-Making Black Women You Probably Didn't Learn About In School
By Ayana Lage and JR Thorpe
25 Inspiring Quotes From Black Women To Celebrate Black History Month
By Kyli Rodriguez-Cayro and JR Thorpe
8 Charities To Donate To During Black History Month
By Alexis Morillo
Eurovision Has Been Given A Whole New Look Ahead Of Its Liverpool Debut
By Bustle UK
Get Even More From Bustle — Sign Up For The Newsletter
From hair trends to relationship advice, our daily newsletter has everything you need to sound like a person who’s on TikTok, even if you aren’t.