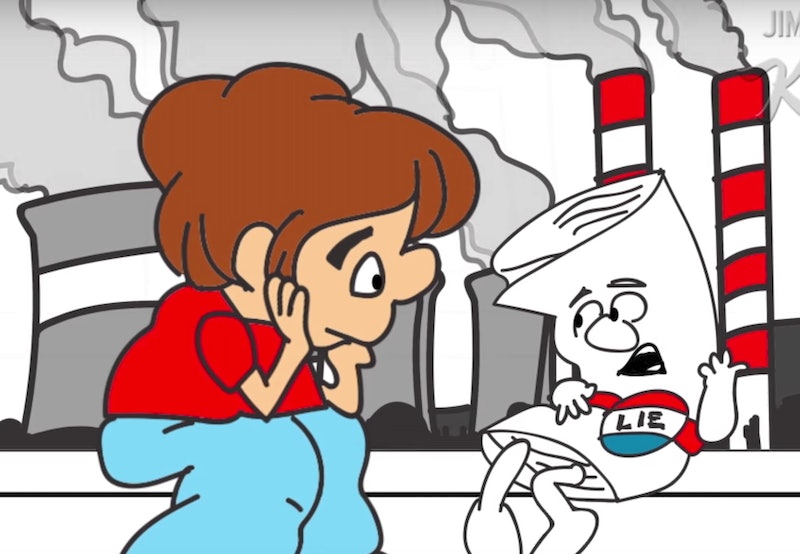 If you grew up with Schoolhouse Rock, then you probably remember a video by the name of "I'm Just a Bill," which has been teaching students the basics of Washington for years. One might argue that considering our current administration, things aren't working like they probably should; this would explain Jimmel Kimmel's Schoolhouse Rock parody "I'm Just a Like" which tells a more accurate story about how Washington is working these days.

"I'm Just a Lie" played on Jimmy Kimmel Live! Tuesday, looking and sounding eerily similar to the original version we all fell in love with; but the lyrics are notably different. "We are now living in a world of alternative facts," said Kimmel in his opening monologue. "The president makes statements almost every day that aren't necessarily based in truth, which is frustrating to some people, and confusing to others, especially young people. You know, we're raised to believe that the president tells the truth, but that isn't necessarily the case anymore. To bring children up to date on the new American way, we took a cue from Schoolhouse Rock."

For reference, and in case your memory is a little fuzzy, here's the original "I'm Just a Bill" video from your childhood:

And here's Kimmel's updated version, based on more recent happenings:

The entire video is packed full of gems of wisdom, teaching all of us the complete, start-to-finish process of how a completely made-up story starts with the president's imagination and somehow ends up being accepted as truth. Here are a few memorable lyrics (kids, take notes, please).

"Well I just popped out of the president's brain, and the very idea of me is completely insane. But someday I'm gonna be a fact, oh yes. I'll try and I'll try, but today, I am still just a lie."

In explaining how lies become facts, our new little friend sings, "See, first, the president tweets, then his followers retweet me ... And across the internet, I'll fly. That's how I spread far and wide, but today, I am still just a lie."

Don't lie: You've totally thought of Trump tweeting from the toilet, like the rest of us do.

Funny? Certainly. But it also speaks a startling truth about the horrible and scary divide that has happened in our country, and how hard it's become to separate fact from fiction, thanks to a president with a sense of creativity that's out of control, and irresponsible news reporting: "Everybody here is taking sides. And the truth will lay down and die, 'cause you can't tell a fact from a lie."

And just like that, a lie becomes a fact — something POTUS has made a habit of. The line between reality and falsehood has become so blurred that nobody can tell what's what anymore.

And that, children, is how things work in Washington these days. The video concludes here, but not without taking a jab at Trumpcare first, because why wouldn't you?

Check out the full video here.