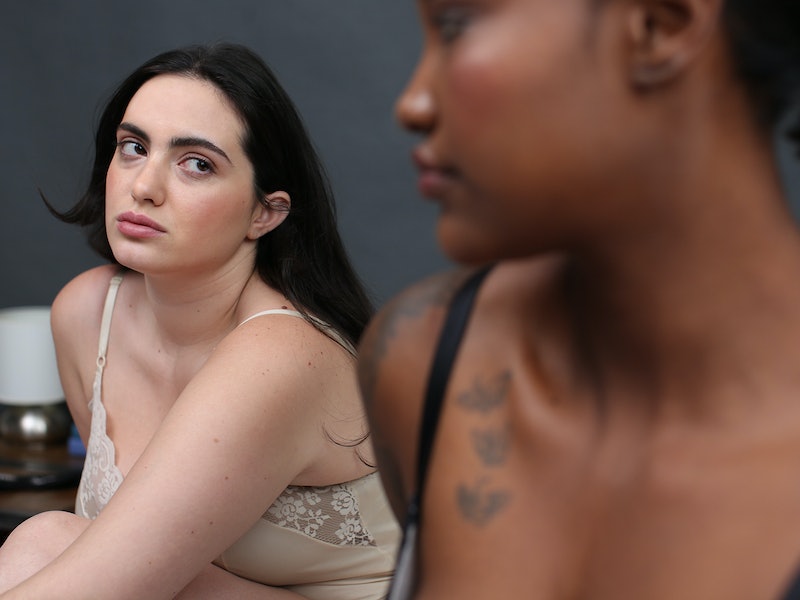 We’re always hearing that we could be having better sex, a better orgasm, or a better relationship. But how often do we hear the nitty-gritty of how we can actually better understand our deepest desires and most embarrassing questions? Bustle has enlisted Vanessa Marin, a sex therapist, to help us out with the details. No gender, sexual orientation, or question is off limits, and all questions will remain anonymous. Please send your sex and relationship inquiries to tips@bustle.com. Now, onto today’s topic: what does it mean when you cry after sex?

Q: “I read your article about crying during sex, and I wanted to reach out because I have a slightly different question: why do people cry after sex?

The tears were a reflex action. I couldn't stop them. I have no idea where they even came from. Do you have any idea or theory as to what happened? Why would someone cry after sex?”

There’s no great scientific reason for why we cry after sex, or why we cry certain times but not others — and no reason to think that there's something strange or abnormal about crying after sex. Sometimes we cry because there is a problem at hand that we might want to confront; other times, we're just having a physical reaction. Here are 10 of the biggest reasons you might be moved to tears after sex.

Most of us have high expectations of sex. But often, the reality of sex is very different from what we had been anticipating. And sometimes, we cry after sex because those sexpectations come crashing down.

It sounds like this experience with your boyfriend may have been pretty disappointing for you. Since you two hadn’t seen each other in a while and were excited to be reunited, you probably had high expectations about what is was going to be like to sleep together again. You said you were really getting in the groove, and enjoying yourself. But in the end, sex only lasted two minutes, and you were left unsatisfied. The tears may have been your body’s way of saying, “Wait, what just happened? I thought this was going to be so different.”

You Didn’t Get Yours

For you, one particular unfulfilled sexpectation was around your orgasm — I think you hit the nail on the head when you said, “I felt denied of my climax.” You didn’t mention what happened afterwards (more on this in a minute), but it sounds like you never got to have your own orgasm. That can be really frustrating! Your tears may have been tears of frustration.

If you’ve read my columns in the past, you probably know I’m not a huge fan of trying to have simultaneous orgasms. But couples should still make an active effort to ensure that both partners are satisfied — and the reality of what happened is that your boyfriend got to have an orgasm, and you didn’t. It’s understandable that he came quickly after a long period of time apart, but do you think your pleasure is important to your boyfriend? He could have made you orgasm first. Or he could have tried to slow himself down, or taken breaks to allow you to get closer to your orgasm. He also could have offered to take care of you afterwards. Your tears may have been a way of saying, “Hey, that’s not fair! What about me?”

I think it’s likely that your tears were some combination of the three above reasons, but here are some other possibilities for you or anyone else who has cried after sex:

Timing and orgasms aside, a lot of people get sad about the simple fact that sex is over. Sex can be so much fun! And like anything else fun, it sucks when it ends. Sex can also be deeply intimate and connecting, so we might feel sad when we pull apart and break those bonds. Sometimes, you might cry because you just don’t want that connection to end.

One particular disconnect that can happen is feeling like you and your partner just had sex for very different reasons. I’ve had clients tell me they had sex with someone thinking it was going to bring them closer, only to realize after the deed was done that it was just casual for the other person. You may even have felt some element of this with your boyfriend; maybe you were hoping for a romantic reunion, but he went for rapid-fire jackhammering. Or maybe you felt like he ignored your desires or your pleasure.

We all have our own hang-ups when it comes to sex. It's usually so much fun in the moment itself that we can ignore a lot of those hang-ups, but once sex is over, they can come crashing down around us. You might feel guilty for having sex outside of marriage, or start thinking about your parents or your pastor telling you that sex is sinful or immoral. You might start picturing the reactions of your friends or loved ones if they knew what you had just done.

If you’ve experienced sexual abuse in the past, feelings of triggering can sometimes catch up with you only after sex is over. You might have done something in the moment that actually didn’t feel safe or OK to you, or you may be flooded with memories of negative sexual experiences from the past.

Sex can also come with some pretty big consequences. Sometimes people cry after sex because those consequences have suddenly started to feel more real. For example, you might be worrying about contracting an STI, getting pregnant, or about what the sex that you just had “means.”

Your Hormones Took Over

One of the most straightforward explanations for crying after sex is the rush of hormones flooding through your body; orgasm in particular can trigger an avalanche of hormones. Sometimes, tears after sex don’t mean anything other than that your hormones are raging.