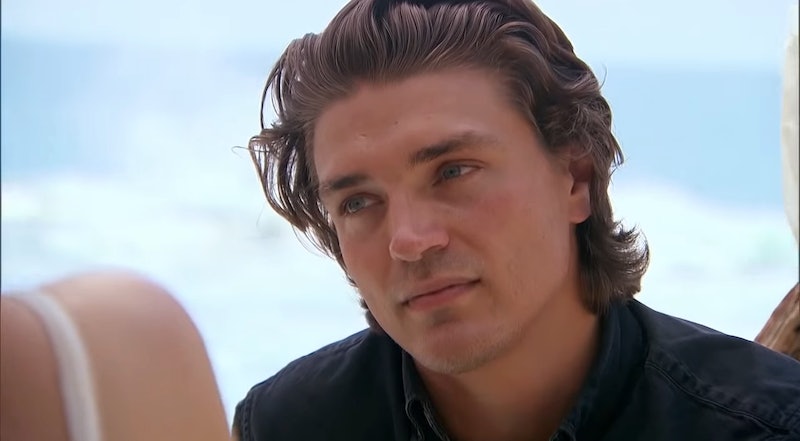 With Onyeka and the recently-departed Derek, Dean wasn't the only person to voluntarily leave Bachelor in Paradise in Season 6. But, as previews have shown, he will be the first to return. He seemingly comes back to ask Caelynn to give him another chance, so is Dean single after Bachelor in Paradise? Caelynn was pretty upset when Dean broke up with her on her birthday, but she moved on quickly with Connor and they've been rather inseparable since. Yet, Dean's grand gesture just might win over Caelynn (aka, it absolutely will if you believe the clues that they are dating) and it could be the key to his current relationship status.

Nothing says love like a change of facial hair and in the preview for the Sept. 3 episode of Bachelor in Paradise, Dean shaves off his mustache as he heads back to the beach. The clips have shown that he's a man on a mission when he returns to Bachelor in Paradise — and that mission appears to be getting Caelynn back. Dean says to her, "I came here to ask you ..." and while the preview doesn't reveal what he's going to ask, Dean and Caelynn have kind of spoiled their Bachelor in Paradise ending through social media.

E! News reported on July 15 that a source said that Dean and Caelynn were dating. While the alleged couple couldn't respond to the rumor, they had fueled dating speculation even before the E! News report. On July 10, Caelynn posted a photo in Spain on Instagram and on the very same day, Dean also posted a photo in Spain. Sure, they were in different cities, but it seemed like they were traveling together. And since Paradise started airing they have continued to hang out since they were spotted at a tattoo parlor together in mid-August.

Dean has been speaking a bit about his situation with Caelynn on his podcast Help! I Suck at Dating with Jared Haibon and Vanessa Grimaldi. On the Aug. 30 episode, he wouldn't reveal much about what will happen when he returns to Paradise. But he said that after he left Mexico, he drove to the Grand Canyon from San Diego where he "sat there for a couple hours, thought about things." He then called the Bachelor in Paradise producers and asked to come back because he was "sad" and "really upset" — most likely because he regretted breaking up with Caelynn.

Interestingly enough, he said in the previous podcast episode how his relationship with Caelynn on Paradise is "like that Batman quote, 'It's always darkest just before the dawn.' But let me assure you, the dawn is coming and things are going to get a lot ... well, maybe ... get a lot brighter. We'll see." So that sure makes it seem that his return to Mexico will lead to them getting back together. After all, a week ago Caelynn shared a photo of her and Dean kissing during the show and wrote, "A rare moment where Paradise actually felt like paradise," so that definitely doesn't indicate that she's still with Connor.

Ahead of the Sept. 3 episode, Caelynn and Dean dropped another clue about their potential happy ending on Instagram. Caelynn shared in her Instagram Story a photo riding in an airplane and then pictures of her tropical destination. Dean meanwhile shared a picture of him at the Los Angeles International Airport with a name tag saying "Caelynn" on his shirt. He wrote, "missing baggage: if found please return to @caelynnmillerkeyes," so these two are most likely on vacay together and very likely a couple.

After he left Paradise, Dean responded to a fan on Twitter who noted he was falling for Caelynn. He responded, "I'm afraid of feeling things duh!" So after some reflection at the Grand Canyon, this nomadic contestant will come back ready to commit to Caelynn. And based on their social media updates, Caelynn's feelings for him are strong enough that she will probably take him back and join him in his wandering ways.