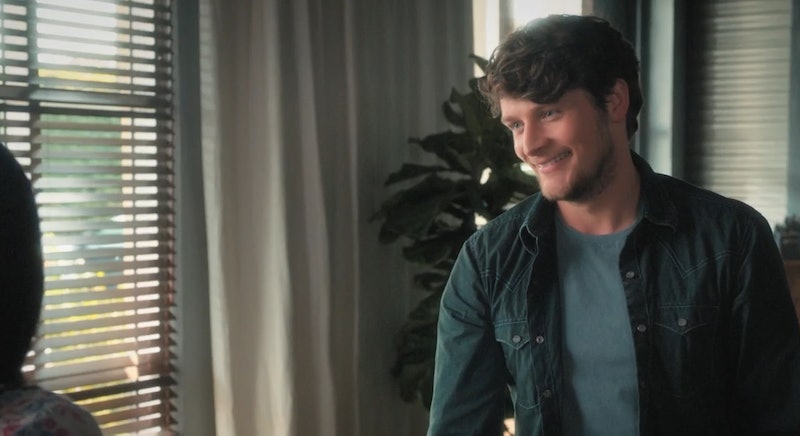 Spoilers ahead for Jane the Virgin Season 5. Fans never thought they would see Michael alive again on Jane the Virgin before the Season 4 finale. But following his return and the reveal that Sin Rostro faked his death, is Michael in the Jane the Virgin series finale? Jane officially chose Rafael over Michael in "Chapter 88" and left him in Montana. As showrunner Jennie Snyder Urman teased, Brett Dier returned one last time to Jane the Virgin in "Chapter 98" when Jane needed him to sign away his life rights for her novel. Team Michael fans might not have been satisfied with the way his storyline was handled in the fifth and final season of Jane the Virgin. But his appearance in "Chapter 98" really was the last time fans — and Jane — would ever see her former husband.

Jane's book prospects were looking great in "Chapter 98." That is until she found out that Michael hadn't signed over his life rights and without them, she would have to remove everything about him from her book. And since Jane reveals in the finale that Jane the Virgin is her novel told in telenovela form, that would have made for a supremely boring show. So she reached out to him only to discover that Michael had traveled from Montana to Miami to discuss this exact matter with her. But Michael wasn't alone. It was his pregnant fiancée Charlie who didn't want the book to come out with all those intimate Michael details. And while it didn't seem that the tough Montana rancher Charlie would budge, this meeting between the three of them gave everyone some much-needed and final closure.

Rafael is usually the person most jealous of Jane and Michael's relationship, especially after "Jason" got his memories back. But Raf displayed his personal growth when he encouraged Jane to meet up with Michael for the sake of her book. Instead, it was Charlie that was experiencing doubts about her relationship with Michael. As she confessed, "I wanted to see if y'all still had anything between you. I mean, the way you went on about how y'all were destined to be together and how when you saw him, your heart would glow. Didn't exactly go down like pickle juice."

But Michael put Charlie's mind at ease when she overheard him telling Jane, "Charlie means everything to me! Look, when you left, I was broken. And Charlie put me back together again. I know this sucks, but, you know, I have to choose her and her feelings. She's my partner. For life." And with him saying those words and truly meaning them, it not only secured the future of Jane's book but it confirmed for all viewers that Jane and Michael were officially over.

As the narrator (aka, Mateo!) said after Jane and Michael said their farewells, "This time, friends, it really was goodbye." So you can presume that Michael and Jane never cross paths again. In many ways, that's devastating when you consider the deep love they once shared and how they had planned to spend the rest of their lives together. But after Sin Rostro faked Michael's death, he and Jane aren't the same people anymore. After living for years without any knowledge of his true identity, Michael didn't want the same things he had wanted when he married Jane back in Season 2. And Jane learned to live without the version of Michael she had loved before.

It's undoubtedly sad that what could have been for Jane and Michael was cruelly taken away from them by Sin Rostro. But Michael's final appearance in "Chapter 98" showed that he is happy now with a partner he relates to and loves with fierce commitment. Plus, it's extra cute Charlie is played by Dier's real-life fiancée Haley Lu Richardson, who starred in Justin Baldoni's feature film directorial debut.

As for Jane, well, it's in the final episode where we got to see how happy Jane is now with her husband Rafael. Because even when it comes to destiny, sometimes fate will send you on multiple paths. And the last two chapters of Jane the Virgin showed how both Jane and Michael are happy with where life led them.

More like this
We Still Have A Few Unanswered Questions At The End Of 'The Suspect'
By Sophie McEvoy
Shonda Rhimes' Net Worth Makes Her One Of The Wealthiest People In TV History
By Hugh McIntyre
The Best 'Grey's Anatomy' Intern Moments, From MAGIC to Glasses
By Grace Wehniainen
'The Rings Of Power' Episode 7 Will Feature An “Unlikely Pairing Of Characters”
By Grace Wehniainen
Get Even More From Bustle — Sign Up For The Newsletter