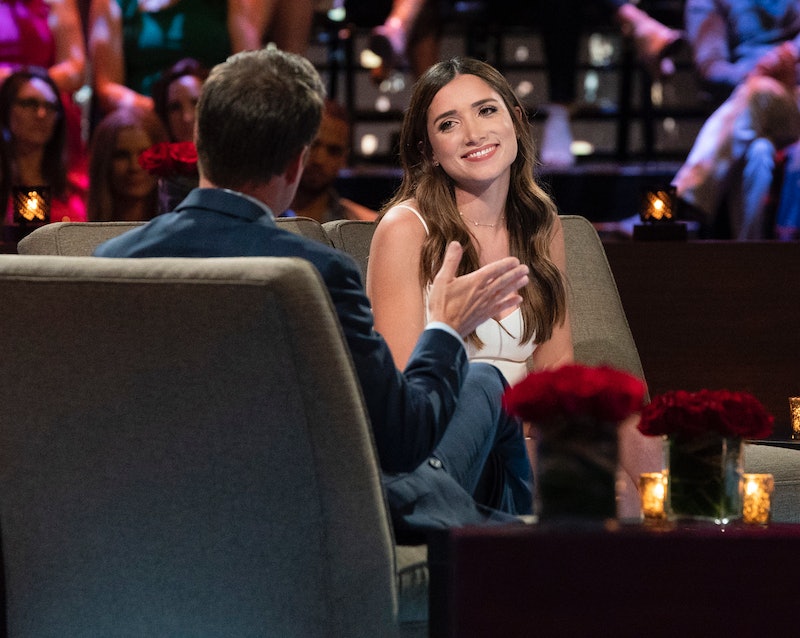 Ever since Colton sent her home because of an argument with Onyeka on The Bachelor, Nicole has been thriving on social media. But how's her love life going? Is Nicole from The Bachelor dating anyone? She'll appear on Women Tell All on March 5 where she'll discuss her time on the show. Before her fight with Onyeka, Nicole seemed like one of the more drama-free contestants, and based on her Instagram, she does seem to have a fun-loving spirit. Plus, she's not afraid to make fun of herself. That includes her brutal honesty about still being single after The Bachelor, which just might make Nicole a great candidate for Bachelor in Paradise.

Nicole and Onyeka were both eliminated at the start of Week 6 after a fight between them dominated the pre-rose ceremony cocktail party and clearly frustrated Colton. He also must not have had that strong of feelings for either of them, since he didn't hesitate to send either of them home and had previously been more tolerant of Hannah B. and Caelynn's disagreements. It was kind of a shame since up until then, it seemed like, with her strong family values, Nicole could have been a good match for Colton. But it wasn't meant to be and you'll certainly hear more of her side of the story during Women Tell All — and yes, that unfortunately means another altercation with Onyeka.

But Nicole's life on Instagram and Twitter is light on drama, heavy on humor. Just look to the time she photoshopped herself into a photo of the Cheetah Girls for Galentine's Day, when she created her own Super Bowl-inspired Bachelor MVP promo, or when she couldn't help but fangirl over the Jonas Brothers reunion. In all three of these instances, Nicole put her creativity and flair for comedy to good use.

Another way she's down-to-earth? She's not too cool to be coy about her relationship status. In her Lols Instagram Story, she shared Kim Kardashian's video of Kanye West's Valentine's Day gift to her, which included a private performance by Kenny G and a floor full of roses. Nicole wrote on the vid, "Actual footage of me, surrounded by chocolate wrappers, posting stories on Instagram as my abuela looks on happily, yet with shame, bc her nieta is still single."

Like the rest of Bachelor Nation, Nicole has been having a blast posting about Colton's long-anticipated fence jump. And she joked in another story that her fence-related posts have earned her more attention from Bachelor Instagram accounts than actual human men.

Even if you were disappointed by her dispute with Onyeka, Nicole has proven that she's a person worth following on social media if you want commentary on all things pop culture and The Bachelor. And maybe with this added attention, she'll change her status from single to in a relationship. But for now, she's still looking for love — and maybe Harrison will help give her romantic life a little nudge by offering Nicole a chance to be on Bachelor in Paradise during Women Tell All.