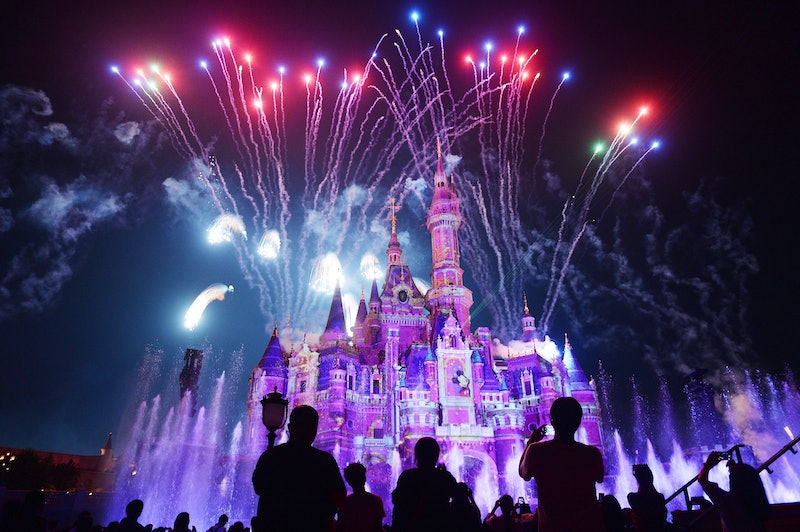 Like a lot of monolithic cultural institutions, a lot of weird stories and urban legends cling to things associated with Disney — from the cartoons to the characters to the parks. But although the stories themselves often end up not being true, there's frequently a little kernel of reality buried somewhere deep inside it. If, for example, you've been wondering, "Is the Matterhorn at Disneyland haunted?", I have news for you: It probably isn't — but as is often the case with urban legends, there is some truth to the story behind this one. It's just not necessarily the bit with the ghost.

In 1984, 48-year-old Regena Young of Fremont, Calif. died while riding the Matterhorn at Disneyland Park in Anahaim; she fell from her seat and was struck by another bobsled coming down the track. According to Snopes, her seat belt wasn’t buckled; however, she was riding alone in the last car, so we’ve never been able to determine whether she had unfastened her seat belt on purpose or whether something else happened. Young’s family sued after her death, and accepted a settlement in 1988, according to the LA Times.

Disneyland spokesperson Bob Roth told the LA Times at the time of the settlement that the type of seat belt used on the Matterhorn had changed since the accident; previously, the ride had used a “friction fastener where you slide the belt through the buckle, and the buckle closes on it,” said Roth, but now, it used a snap-in buckle like the kind found in cars. Roth noted that the change “has nothing to do with this case”; the seat belts had been swapped because the maker of the old type the ride had used had gone out of business.

Regena was known as “Dolly” — which is where the allegedly haunted section of the Matterhorn gets is colloquial name: Dolly’s Dip. According to some cast members, Dolly's ghost actually haunts the whole ride, although she focuses particularly on the Dolly’s Dip area. For example, in 2016, a former cast member writing under the name Kristin at the website Wander Wisdom, noted, “I worked on that ride for several years, and I never saw her. But I sure did feel her.”

Kristin wrote that she spent six years as a rider operator in Fantasyland in the early ’90s, which meant that handling the Matterhorn was regularly part of her routine. At the time, said Kristin, part of the end-of-day duties once the ride had closed involved two people talking the track of the entire ride in order to look for lost items. “Every time I was (un)lucky enough to get a track walking shift I had an uneasy feeling, like someone was watching me,” she wrote. “The feeling was always the worst in the big cavern in the middle of the ride, and at Dolly’s Dip (the spot where she died). In fact, the work lights in the tunnel near Dolly’s Dip always seemed to be burned out. In six years, I don’t think I ever saw those lights working.”

For what it’s worth, Kristin’s story is the only first person account of the legend I’ve been able to find; there are a few drips and drabs about it circulating around the internet, but they’re mostly hearsay. For example, in a 2015 piece on the “Scary Legendary Ghost Tales of Disneyland Haunts,” the OC Register wrote that “cast members who are required to walk the tracks when the ride shuts down say they can hear [Dolly]” at Dolly’s Dip; furthermore, according to a piece at The Ghost Diaries from last year, “A few [cast members] reported strange sounds while doing their nightly walk through of the ride track after closing and some even refuse to go near that area of the ride.” There’s also a brief mention of Dolly’s Dip in an AskReddit thread from about a month ago.

Note, though, that none of these posts or threads include any quotes from actual cast members telling their own stories of first-hand experiences. The information is all of the "It's said that..." variety, rather than the "This is what happened to me" sort. Indeed, San Diego Haunted is the only current source I’ve been able to find that says they actually spoke to cast members about the story — and they report that “the cast members we talked with on July 2, 2014 said they have never seen any ghosts or had any paranormal activities while ‘walking the tracks’ and cleaning up.”

That’s all very interesting to me.

And so is this: the 2008 archive of a website called Haunted Honeymoon tells a version of the story behind the Dolly’s Dip tale — with no sources cited — that’s quite different from the reality:

“Dolly was a mother who went on the ride with her children. She was worried about them so she undid her seat belt and turned to look at them. The train went into a sharp decline (now known as Dolly's Dip) and was thrown from the train and run over by the next bobsled.”

Dolly has well and truly become a legend — an example of how a tragic, real-life historical event can get misreported and reinterpreted over time, resulting in the birth of a new tale that bears only the slightest resemblance to its source material.

Worth noting, by the way, is that Dolly Young’s death isn’t the only fatality to have occurred on the Matterhorn; roughly 20 years prior, a different — yet remarkably similar — accident claimed the life of a 15-year-old boy. In 1964, Mark Maples, a teenager from Long Beach, Calif.,tried to stand up on the Matterhorn after someone — either himself or his riding companion; we’re not sure which — unfastened his seat belt. He fell from the sled and was critically injured; he died from his injuries three days later. This incident is notable for being the first documented fatality at Disneyland.

I won’t lie: I’m a little curious about why the ghost stories center specifically around Dolly’s Dip; the earlier accident doesn’t appear to be a part of the legend. With two very similar incidents having occurred on the ride — and almost exactly 20 years apart — I could very easily see some sort of “cursed ride” narrative rising out of the pattern. And yet, it hasn’t — and I can’t help but wonder why.

The ride isn’t cursed, of course; those are the only two incidents to have occurred on it, for one, so we’re definitely not looking at a pattern — and for another, there have only been nine guest fatalities total recorded at Disneyland since the park's 1955 opening, most of which occurred during its earlier decades. (Three occurred in the ‘60s; one in the '70s; and three in ‘80s. The ‘90s, ‘00s, and ‘10s have only seen two combined.) Nor do I really believe a ghost haunts the Matterhorn (although if you’ve worked there and you’ve got an experience of your own to share, I’d love to hear it).

It’s always worth remembering, though, that something real did happen there. The truth may not always be stranger than fiction — but that doesn’t diminish the enormity of what actually occurred. Some places aren’t always the happiest place on Earth.